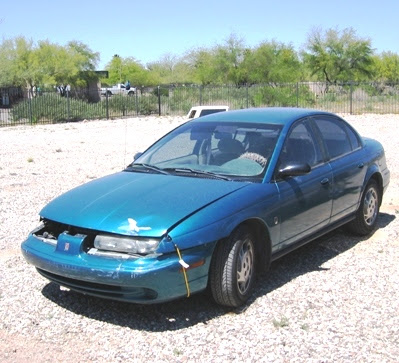 The Saturn, the last time I ever saw it.
Weekend Assignment #224: What's the worst idea you ever had? Amuse us with a story of a cunning plan that produced less than stellar results. (If your worst idea was positively traumatic, you can tell of your unamusing disaster, or downgrade to a more benign bad idea you had.)

Extra Credit: Have you a mad scheme that's still in the planning stages?

I don't seem to have preserved the evidence digitally, but back around 2004 I attempted to spraypaint the interior of my 1997 Saturn. Originally dark green, the car had been professionally repainted turquoise some months before, and the clashing beige-and-brown interior was bugging me. So I bought some pink spray paint, carefully selected to a) be compatible with vinyl, or hard plastic, or whatever, and b) a nice, cheerful, even slightly subtle color from the midcentury modern palette.

Okay, so it didn't work, for three reasons:

1. The spray paint just wasn't capable of covering the surface cleanly and evenly, and besides, there was still all that non-matching upholstery.

2. The color was so light that it created a reflective glare in the front windshield. Forever afterward I had to keep it covered with an upholstered dashboard cover purchased at the Tanque Verde Swap Meet. (You can see the dashboard cover in the photo above, which was taken in April 2005 after a kid in a 1965 Ford truck totaled my car. The fuzzy pink steering wheel cover was my remaining concession to the preferred color scheme.)

3. John was very, very unhappy with me.

Okay, so I won't do that again! But I'm sure there are other wild and crazy things I'll do before my life is over, hopefully to better effect. For example, in just two weeks I'll be flying to California for all of a day and a half, to see Disneyland in the company of two close friends from my online life. One of them I've met in person for a total of about two hours. The other one I've never met at all.

Your turn! Tell us of a past disastrous idea in your blog or journal, include a link back here, and leave a link to your entry in the comments below. I'll be back in a week to compare notes, in the possibly vain hope that mine wasn't the dumbest idea of all....

A bold act to spray paint the interior of your car... I chuckled as I remembered around 1976 or so, my dad had spray painted his (68 or 69) Charger a bright yellow. It looked awful. You could tell it was spray painted with canned spray. But he loved that car. My dad had a wild and crazy streak every once in awhile. My wild and craziness shows up in clothing... most of the time I'm conservative, but then I get some wild idea that I could possibly look good in something that would make me a great candidate for What Not To Wear! If I think of something more specific, I'll do a journal entry.

I could think of too many things - except when I'm put on the spot. :-)

I do have a mad scheme, cunning plan, whatever you want to call it in the works, so I can't say at this point whether or not it will fail miserably. If it does, it will probably be very public.

Okay, I came up with something. I don't know if it quite fits the assignment, but it's a time when I ended up with virtual egg on my face, so perhaps it counts:

This was a challenge, since I couldn't really come up with any amusingly colorful fiascos, but I did think of something.

I'm up. too bad you don't have pictures of the interior. I can't imagine how that looked. And how it wore off over time. Good story.

I opted for downgrading to benign: