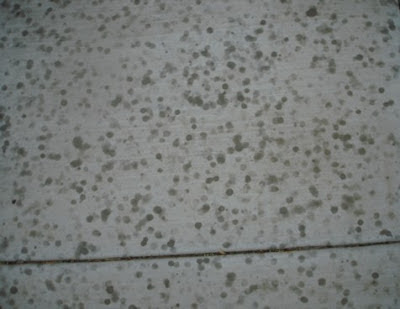 The sidewalk today as I waited for John to pick me up
I think the monsoon has started, but the NOAA / National Weather Service site doesn't seem to actually say so yet. I can't remember the last time I was this blase about the coming of Tucson's rainy season. I guess I'm mostly distracted by the dog and the job and that tv show. Then again, it hasn't actually rained that much yet. We haven't had any really wild storms or amusing-but-nondestructive flooding. June's precipitation was well below the average. We'll see how July does. 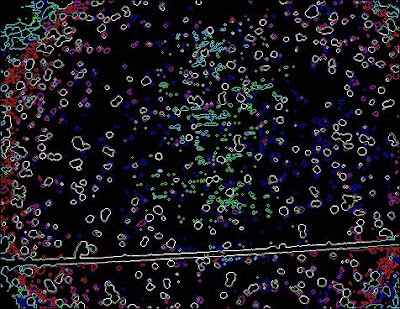 Same sidewalk, solarized and in neon
It rained today, though. John was a few minutes late and I stood in the light rain, holding onto a tall metal post until I suddenly realized that's not a good idea during a thunderstorm. I took a few pictures, and it wasn't raining so hard that I have any basis for complaint. 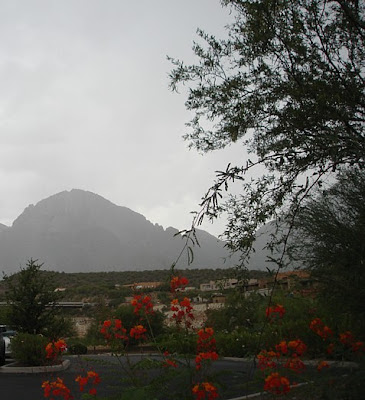 The view from the sidewalk
I did enjoy seeing that after all my clear views of nearby Pusch Ridge, the mountains were rather obscured. There are times during the monsoon when you can be driving in Tucson and not see the mountains that surround the city. The bar for that is higher in Oro Valley where I'm working, because the Catalinas are so close by. 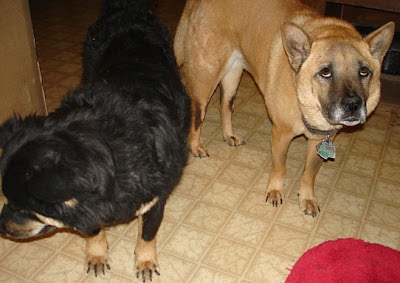 Tuffy and Pepper the Innocent
Meanwhile, here are my canine distractions again. You can see Tuffy's swollen neck, and one possible source of the gouges in her ear: Pepper. She had a fresh one this morning, near her eye. John figures it's either Tuffy scratching, Pepper biting, or the broken doggy door. I suspect the latter. John removed what was left of the flap this morning, just in case. The dogs do seem to get along pretty well these days, a bit jealous but following each other around. Tuffy certainly isn't avoiding Pepper, which I think she would do if the PepPep was acting like the Devil Dog I facetiously accuse her of being.