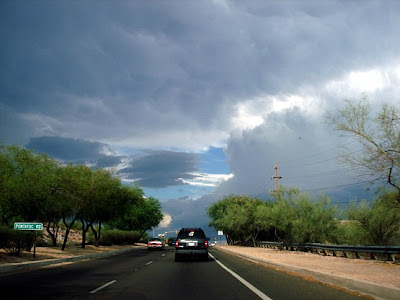 Clouds over Tucson, July 3, 2008.
As I noted last night, the day that just ended was about celebrating the adoption of the Declaration of Independence, that marvelous 1776 document that proclaims that all men have "certain unalienable rights" to "Life, Liberty and the pursuit of Happiness," and ends, "And for the support of this Declaration, with a firm reliance on the protection of divine Providence, we mutually pledge to each other our Lives, our Fortunes and our sacred Honor." It was mostly Thomas Jefferson's work, but John Adams and Benjamin Franklin also had a hand in it, along with two other guys I've never heard of. I had an eighth grade social studies teacher who made us memorize the beginning and end of it, along with he preamble to to the U.S. Constitution:

"We the People of the United States, in Order to form a more perfect Union, establish Justice, insure domestic Tranquility, provide for the common defence, promote the general Welfare, and secure the Blessings of Liberty to ourselves and our Posterity, do ordain and establish this Constitution for the United States of America."

I'm grateful to Miss...well, I forget her name, but it started with a Y, for exposing us to those two documents, especially considering that for the other semester that year, we had a teacher who displayed his NRA membership in his classroom and showed us 1950s Cold War propaganda films without irony or critical appraisal. I grew up revering the balance of power among the three branches of government, the separation of church and state, and the guarantees of the Bill of Rights. Five of the Constitution's 27 amendments have been added in my lifetime, including one that somehow slipped past me, about congressional pay raises. One high-profile proposed amendment, the ERA (Equal Rights Amendment) for women's rights, somehow failed to get through, but that sort of thing is now rightly considered inherent in what's already there. I can't claim to be uniformly happy with every Supreme Court decision of the last decade or so, as George W Bush and friends have done their best to shift its membership to the right; but overall I believe the court has done a good job, and I strongly believe in the principles in the foundational document the Supreme Court seeks to interpret.

Last week I picked up the land line here at home and found myself interacting with a fully automated opinion poll. There was no human at the other end of the call, even to ask my cooperation, just a series of prerecorded questions. My answers were recorded as numbers - three for "somewhat unfavorable" on an early question, three again meaning "somewhat liberal" on a later one. It was pretty standard stuff at first - rating the performance of the current president and voting for the next one. It got a little odd when it asked where McCain and Obama each fell on the scale from "very liberal" to "very conservative," but I was not prepared for the question that followed:

"Do you believe that the Constitution of the United States should be scrapped? For yes, press one. For no, press two."

This was followed by a question asking whether the constitution should be left alone, tweaked a bit, or scrapped in other to start over. And I was wondering, who could possibly vote for that third option? That's clearly insane, or at least mega-ignorant. I was so shocked that I said to leave the Constitution alone, even though I know that from time to time it may need amending. Better to proclaim myself satisfied with the document as it now stands than to give some robo-poller and its compiler an opportunity to believe I might want an amendment banning same sex marriage, the burning of flags or habeas corpus for prisoners, or whatever harebrained assault on our rights to "Life, Liberty and the pursuit of Happiness" that some conservatives might favor this week.

Even the push for nutty amendments that won't pass anyway is preferable to the idea of junking the Constitution and starting over. Could anyone seriously advocate that, knowing that it's the entire basis for us even having a President, a Congress and a court system, let alone little things like freedom of speech and of the press, and the right to peaceably assemble? And even beyond the ridiculous impracticality of dismantling our entire system of government and starting over, can anyone have such a massive disregard for the core document on which the country is based, and still claim to be a patriot?

I Googled to see whether this opinion poll has been released to the press, but nothing turned up. It could have been a private poll, used to help McCain's people strategize or something. Doesn't matter. My opinion is my opinion, and I will tell it to any pollster, even an automated one with some undisclosed purpose.

But here's the thing. In a country where the Republican nominee for the presidency recently called the Supreme Court's decision to uphold the right to court access for Guantanamo prisoners "one of the worst decisions in the history of this country," perhaps I'm naive to think that no one, provoked over one decision or another, could be induced to speak out against the document that guarantees our most basic rights. I don't write about politics much, but even I am well aware of the current President's penchant for considering himself and his actions above the law, regardless of what the Constitution might say. In researching this rant, I came across numerous references to a report that while meeting with congressional Republicans in 2005 about renewing the Patriot Act, George W. Bush allegedly called the U.S. Constitution "just a goddammed piece of paper."

Well, I've got news for you, GWB, and anyone who might be tempted to scrap some or all of the Constitution because nobody has yet managed to pack the Supreme Court with no-nothing bozos capable of ignoring what the darn thing says. Next January, Bush, Cheney et al. will be out of office, but the Constitution will still be in place. With any luck at all, the next man who says,

will actually mean it. 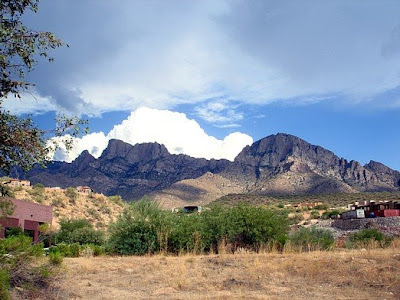 Clouds over Pusch Ridge cause no more than shadows to the rock below.

This administration has truly been frightening, and that quote from Bush just sums it all up. I hope I'm right to think things have got to improve after this . . .