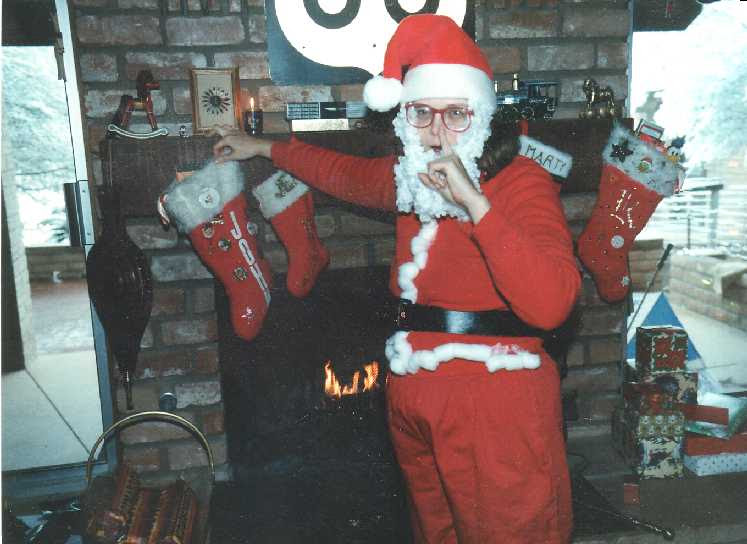 I seem to have confused John Scalzi about the Christmas stockings. Let me explain, then.

Of all the holiday traditions I try to observe, the one that my husband John really gets into is the preparation of the Christmas stockings. John and I each have a stocking that's been around for most of our marriage, so long that old "D-in-sewing" Karen has had to sew them back together a couple of times. We've also had stockings at various times for each of our dogs, Jenny (1979-1989), Noodle (1987-2001) and Tuffy Toro (1996-present); John's sister Martha; my Dad and my Ruth; and my Mom and Aunt Flora. Jenny Dog used to get balloons in her stocking. Part of the fun at Christmas was John blowing up balloons and our batting them around with Jenny. Once in a while she would pop one, and then run up to John, demanding that he blow up another one to play with. Unfortunately, Noodle did not share this enthusiasm, and Tuffy is afraid of strange objects and loud noises. Maybe someday we'll have another dog who likes balloons, and revive this part of the Christmas stocking tradition.

Mostly, though, we focus on the John and Karen stockings, which we decorate and fill for each other. Every year, John and I each put a new button, pin or other bauble on the other person's stocking, to the point where we're starting to run out of room now. Then we fill it with fun stuff. I insist on having a tangerine in the toe of mine, another tradition left over from my childhood. Other than that, there may be batteries or other intriguing accessories to go with some other non-stocking gift; silly toys like a Santa Claus bendy or a Santa clicker, ball bearing mazes and other useless gimcrackery; candy and/or nuts, the exact composition of which varies with that year's dietary situation; Disney comics and trading cards; pens, razors or other small, practical stuff; and usually one nice gift that's small enough to be crammed in there.

I usually go to Yike's Toys to fill John's stocking. You may recall that I mentioned the place in connection with buying little toys to give out at Halloween. Same principle here.John still has the Budda-with-a-cell-phone squeaky toy I got him there years ago. Last year I gave him a little plastic mermaid. This year it may be a hula girl to go with the cool pack of retro hula postcards I got him before. We'll see.

So, John Scalzi, when I tell you to blow $70 on two of the best Christmas stockings ever, I'm talking about doing the stocking thing right, inside and out. Get a couple of good, sturdy stockings, and decorate them with the names Krissy and Athena. Put something silly and personal on the outside, too, some little decoration that means, "I, Santa Claus, know and love this person whose stocking I'm filling." Then fill it up with fun stuff. If you do it right, Krissy will enjoy her stocking just as much as Athena does--and you'll be under pressure to top yourself next year.

Photo by John Blocher, Christmas, 1987; the only White Christmas in Tucson since 1916.

Written by mavarin.
This entry has 2 comments:

Strange. Your real life, as told in the entry above, sounds vaguely like Joshua Wanderer. Maybe that is not strange, after all, with the author being one and the same.
Anyway you've given me ideas for Christmas. I am usually clueless But the really magnificent, amazing magical technicolor super-stocking for everyone is inspired. If I can pull it off I'll let you know how it comes out.
Let me see... start with a gold coin in each one. Not a gold foil-wrapped candy... a REAL gold coin, a hazelnut, a loquat, a cumquat, a tin cricket, a penny whistle, .. well, that's a start.
Comment from chasferris - 11/28/04 3:31 PM