Round Robin: This Is Not Here

For this week's Round Robin Challenge: Not Real, I asked to see "something that isn't real - an optical illusion, a fictional character on stage, fake pearls, a toy sailboat, a tofu hamburger...really, anything that looks like something that it isn't." For my example photo on the RRPC blog post, I edited a photo of a dragon figurine, inserting a background that was part Arizona Sonora Desert Museum, part Pirates of the Caribbean at Disneyland. I plan to do something similar here.

At the same time, though, I have stuck in my head the title of an art exhibit that was at the Everson Museum of Art in Syracuse in October, 1971, when 14 years old. The artist behind the controversial exhibit was Yoko Ono (guest artist John Lennon!) and the name of it was This Is Not Here. I've always regretted that I didn't take the bus downtown to see that. 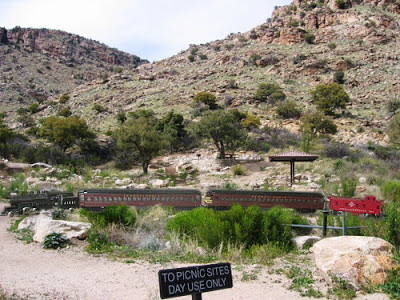 The four cars of this train through the Molino Basin picnic area are from my Dad's old N scale set-up in Wilmington, which I snagged when we were clearing out his place before moving him here. They are actually on our mantle in the den. 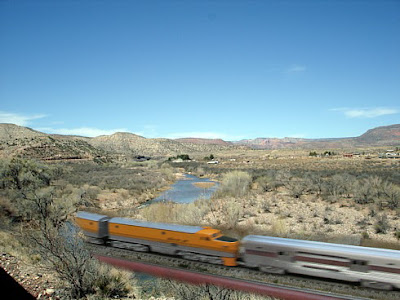 This diesel train was running around a track at the Gadsden Pacific Division Toy Train Operating Museum last weekend. The background is Verde Canyon, where we rode on a real train that does nowhere in particular, back on my 50th birthday trip around Arizona in March 2007. I've tried to suggest that it's emerging from behind some vegetation. 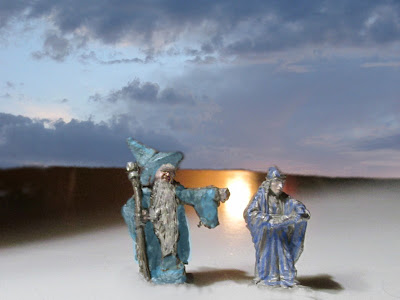 This didn't work, but I had to attempt it. When I was in college the first time, back in 1978 or so, I attempted to make a student film that double-exposed images of lead Dungeons and Dragons figurines superimposed over my friends dressed in fantasy clothing against a real world background. I still can't quite manage the effect! This is a counter top, a real face (part of one, anyway) and a real sky. 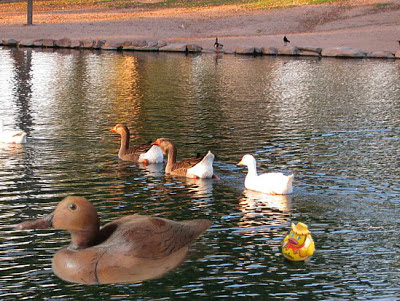 This wooden decoy duck was decorated by my Dad about 20 years ago. The little yellow guy with the hat, Desperado Duck, starred in a series of photos I posted years ago, following him downstream as he really floated along in Reid Park. I added them both to a shot of geese in one of the Reid Park duck ponds.

Turnout is light this time. What do you think? Dare you try to show us something that isn't real? Post it and I'll add your name below!

Round Robin: They Make My Heart Sing

For this week's Round Robin Challenge: Wild Thing, I asked to see any sort of wild thing - human, creature, hair, whatever. But for my own entry, it was always going to be some sort of bird or critter, or both! 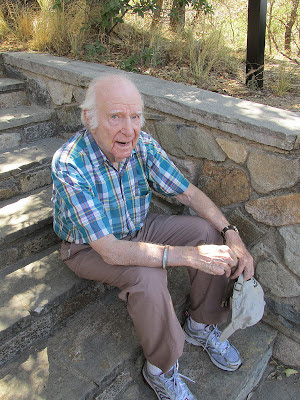 My Dad at the top of the road, Madera Canyon AZ

So a week ago, on my weekly outing with my Dad for "lunch and adventures" (that's what I always write on his whiteboard for Saturdays), I drove him all the way down to Madera Canyon, southeast of Tucson. John and I visited the place together several times in the 1980s, and I'd gone down there on my own more than a few times during that same era. It's a great place for hummingbirds, owls, nighthawks, and even a rare and colorful tropical bird called a Trogan. In years past I've also seen rock squirrels, deer, rattlesnakes and a skunk (and not the usual kind of skunk, either). Last fall I took the dogs along a nature trail and saw two deer along the way. So I had high hopes of being able to show Dad something interesting, and get shots for the RRPC at the same time. If nothing else, he would enjoy reading the road signs on the long drive down.

This was not my first try at showing Dad the local wildlife. I've driven him to the top of Mount Lemmon, only to get rear-ended on the way down by a motorcyclist without a helmet, who then had to be evacuated by helicopter. I also took  Dad on a tram ride up Sabino Canyon about a month ago. I love driving out into the mountains or into the desert, and seeing all the wild things I can, whether they are birds or cacti or critters, or even just the wilderness of rocks and dry creek beds.

A week before the Madera trip I took Dad to Saguaro National Park East. It turned out I could get him a lifetime senior pass for next to nothing that was good for all the National Parks and recreation areas. It even gets me and the car in too when I'm with him. Good deal!

While I was in the visitor center, the rangers recommended that I bring my Dad inside to have a look out their back window: 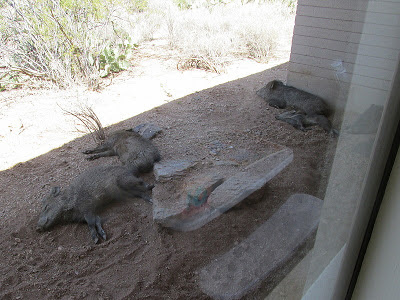 These are javalinas, also known as collared peccaries. They were waiting out the heat of our first official 100 degree day (my car had recorded higher than that for at least a week) in the shade of the building. Look closer: 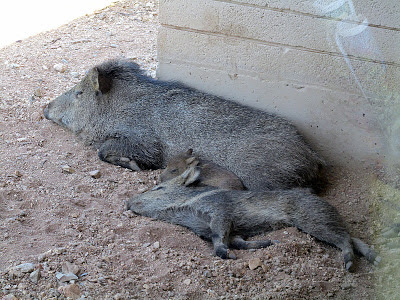 There's a half-grown one in the foreground, and lying up against the adult, a little javalina "piglet!" 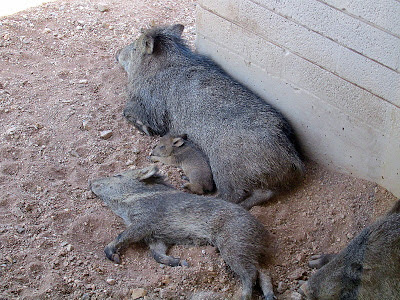 None of which meant anything to Dad. But he liked being out with me, and reading the road signs. So I tried again with Madera Canyon. 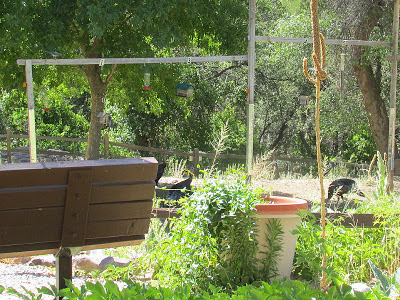 The easiest place to look for wildlife in Madera Canyon is outside the Santa Rita Lodge and gift shop. They have (mostly) shaded benches and chairs spaced in front of a variety of bird feeders, trees and a running water "bird bath" feature. If you look at the large version of the photo above, you can just about make out a Mexican Jay on the horizontal beam above the bench. But what are those big, black things on the ground? 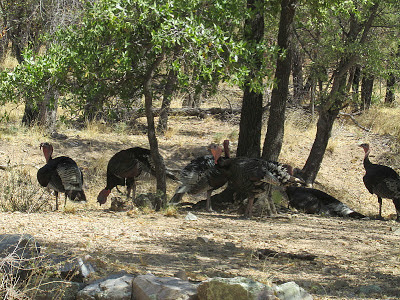 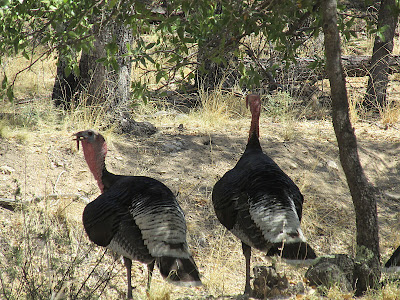 Why, it's a flock of wild turkeys! Ten of them! And they were huge!

And Dad was bored, because there were hardly any signs to read. Ah, well. 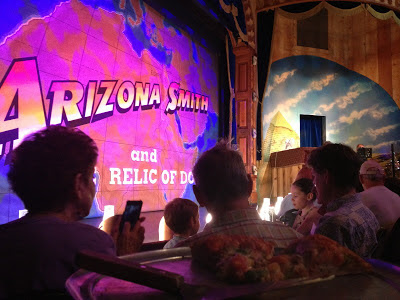 I did better two weeks ago with an outing to the Gaslight Theatre to see Arizona Smith and the Relic of Doom. The wildly silly show (no pictures allowed during performances) seemed to make a bit more of an impression on Dad than any wild animal. It was fun, but it's not something we can do every week.

Tomorrow I think we'll go back to the Pima Air and Space Museum. Or maybe the Titan Missile Museum. Or...?

Now let's see what other Wild Things the Robins have captured with their cameras!

Round Robin: On Location in Tucson, AZ!

For the Round Robin Challenge: On Location, Carly asked to see iconic sights in our home city or town that had appeared on tv or in film - or if they hadn't, they ought to. Tucson has a fairly active film and tv industry, centered mostly around Westerns. Naturally, how much Western shooting gets done depends a lot on whether Westerns as a genre are in vogue in any given year. But when there are Westerns made here, or parts of them, a lot of it takes place at Tucson's combined film studio, back lot and tourist attraction: Old Tucson Studios. I didn't have a chance to get out there for this Challenge, but I have quite a bit of archive material on the place. I hope you don't mind! 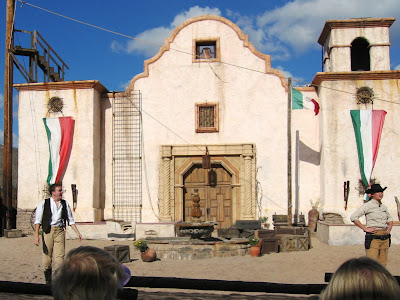 Films made at Old Tucson rang from the sublime to the ridiculous. I can't remember whether this mission church is the same one used in the Steve Martin, Chevy Chase, Martin Short film Three Amigos, or whether this one was recreated for the stunt show seen here. For a film of highlights from this stunt show see Old Tucson Stunt Show 2005 on my YouTube channel, here: 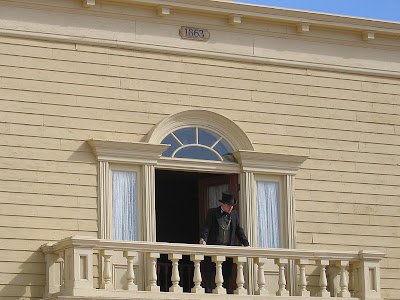 In season (they close for the hot summer), when not filming movies, tv shows or commercials, this place is largely all about the stunt shows. They're not all the same show, either. In this one, the guy on this balcony... 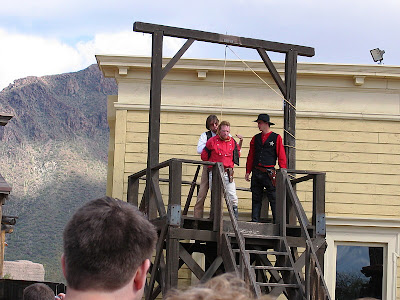 ...is witness to a hanging! 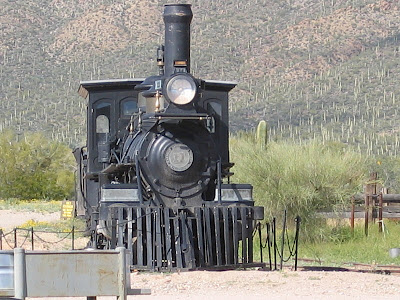 This old locomotive has appeared in lots of movies and tv shows. Unfortunately it was among the many things damaged in an arson fire a decade ago. 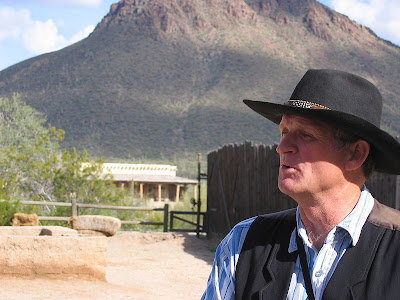 The house behind the marshal here is from the tv series The High Chaparral. I also have a picture of the same guy in front of a building labeled McClintock, named after a John Wayne film. Rio Bravo was also filmed here.

Other iconic film locations in and around Tucson include Sabino Canyon, where other parts of Three Amigos were filmed, and the Boneyard of dead airplanes, where at least one film had its climactic confrontation. Oh, and the old courthouse downtown, which I've also photographed before, was the scene of a Route 66 episode called "How Much a Pound is Albatross?" starring Julie Newmar.

Now let's see who else has locations to show us. Looks like it's just me and Carly so far. But it's not too late for YOU to join in!

Linking List
as of Saturday, June 1st, 1 AM MST