Just for fun I tried the camera feature on my new phone on the ride home from work today (John does the driving). The monsoon is starting up here, and despite having much lower resolution than my real camera, the Rumor wasn't half bad at capturing dramatic cloud pictures. Observe: 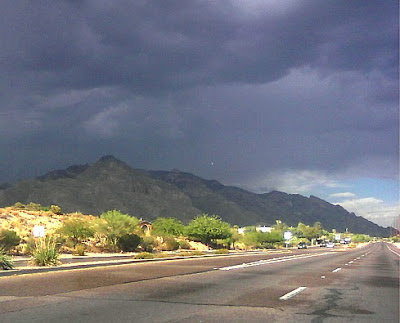 The Catalinas are on the left... 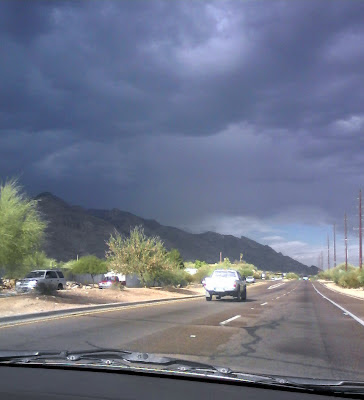 ...and the clouds are building. 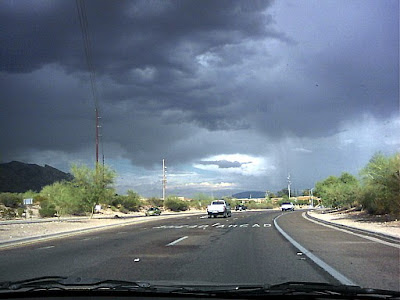 But the actual weather depends on where in town you are. 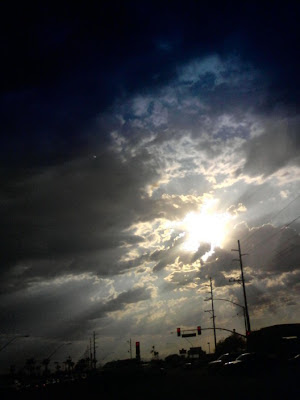 A break in the clouds - unedited except to resize.

I did use Autoenhance, adjust tones, saturation and sharpen lightly on three of these, but that's no more than I normally do with shots from the real camera. Not bad, really! If the camera isn't handy, I now have an alternative.

Best of all, I was then able to transfer the files using the Micro SD card, fitted into an adapter and slotted into the laptop. While I was at it, I added a folder containing the soundtrack to Once More With Feeling. When I popped the card back into the phone and hit the music menu, I was one touch away from listening to Going Through the Motions - not very loudly, but what the heck. Coolness!

I'm trying to get to bed early after my late night rant last night. Catch you all tomorrow!