Weekend Assignment #223: Are You Independent? 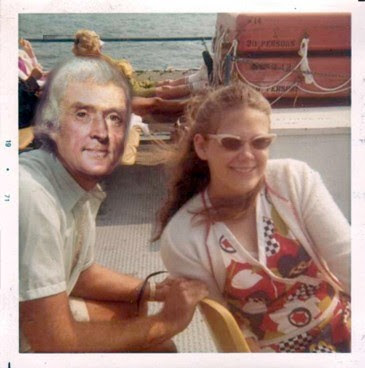 Thomas Jefferson and me back in the 70s, relaxing
Weekend Assignment #223: The U.S. Declaration of Independence was adopted by the Continental Congress on July 4th, 1776, thus providing a written rationale for the severing ties with Great Britain, which the Congress had done two days earlier. All these years later, how independent are you? Of what? Is that a good thing?

Extra Credit: If you were to write some sort of Declaration today, what truths would you hold to be self-evident?

Maybe I'm being a little pedantic here, picking on the word "Independence." But after all, it's the name of the document, and the name of the holiday, even though we tend to call it "the Fourth of July." The Declaration served its purpose at the time, explaining what was going on and why, and inspiring people in their struggle. It was a very different world back then, and England, for all its historic, cultural and familial ties with the colonists, must have seemed very far away, and out of touch with their concerns.

Nowadays, I post on a forum that has at least as many British members as Americans. I watch British tv, sometimes the same day it's aired over there. A few hours ago I listened to BBC radio live online. I read blogs written in other countries, many thousands of miles away. I watch films made in Poland and New Zealand, and lots of other places. I pay a lot for gasoline and for food because of the complex interplay of financial markets across the world - and I know I'm lucky, because some people can no longer afford to buy the food they need, let alone gas. Of the three shirts I've worn most recently, one was made in Nicaragua, one in Hong Kong, one in Vietnam. The whole world is trying to work out what to do about global warming. Independent? We're more interdependent than ever! 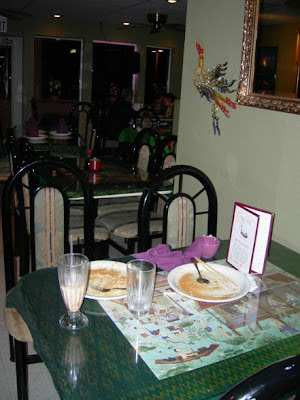 After a Thai dinner for one, Sedona, AZ, 2006
But in other ways, I suppose I'm reasonably independent. Once I make up my mind about something, I can be fairly stubborn, and will usually follow through even if others disagree. I prefer to travel or go to movies with other people, but I'm perfectly capable of doing both on my own, and enjoying it. I love exploring, and not having to answer to someone else for my route or my priorities. I seek John's input on my choice of a car, camera, new glasses, etc., but he doesn't get veto power. I wouldn't care to "go it alone" at all times, with no one else to advise me or keep me company, and sometimes I may give others a little too much influence over my feelings and behavior. Overall, though, I'm independent enough to make my own decisions - and that's definitely a good thing.

Gee, it's taken me all night to write this, because I've been dithering about the focus of the question. For the extra credit, I declare that this Weekend Assignment is totally dependent on you folks to make it successful. So write something, huh? Post it to your journal or blog, along with a link back here, and leave me your link in the comments blow. (Ahem - one person forgot to do this last week!) I'll united the results in a declaration of our states of independence, next Thursday night!

Sorry I didn't get to it this week. The holiday threw off my whole schedule. I will say That I am not totally independent. I think being married, and having two kids, makes it nearly impossible to to whatever I want, whenever I want. But I wouldn't change anything either. I'll be back next week.

Me too. I mean, sorry about not getting to it this week. Lots of invasive factors in my life this week, like crazy work. I think this makes two IOUs on the weekend assignment now (I swear I'll get to them someday!).

I live by myself and support myself, and often travel by myself, so yeah, I'm independent. I'm fortunate to have parents nearby who are often happy to lend their help and/or advice, but I make sure I'm always able to pay my own bills, get out of my own scrapes, choose my own adverntures, etc.