Round Robin: Where Are My Keys?

Having the topic "Keys" for this week's Round Robin Photo Challenge is a good excuse to share this, just by way of an appetizer, or maybe overture:

I first heard that a few years ago and was just floored by it. Lorraine Feather's album containing "Where Are My Keys" is one of the very few iTunes music purchases I've ever made.

Anyway. Here are my key photos: 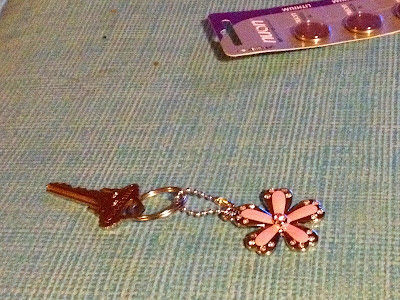 Oops! These turned up in my pants pocket Wednesday evening. Why is that a problem? Because that's the key to the bathroom at my second job. It should have been hanging here: 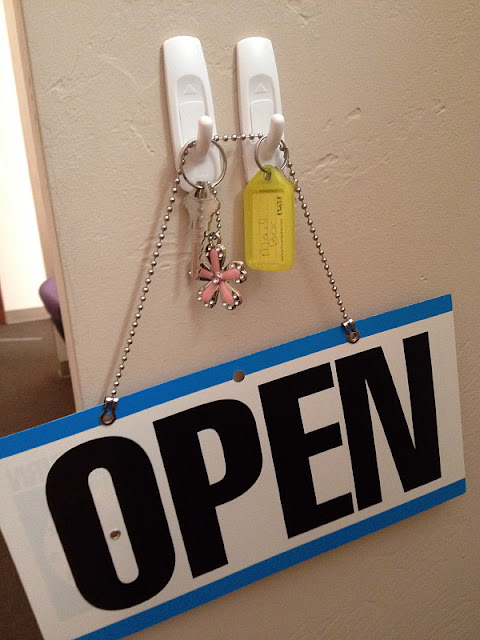 The other key is to...actually, I'm not sure! 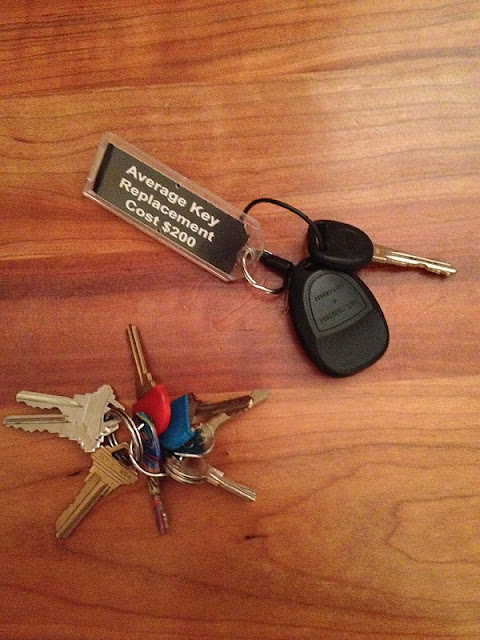 Here are my own keys at the moment. My car is in the shop after an accident in the rain two weeks ago, and I've got a rental with a big warning tag on its key ring. 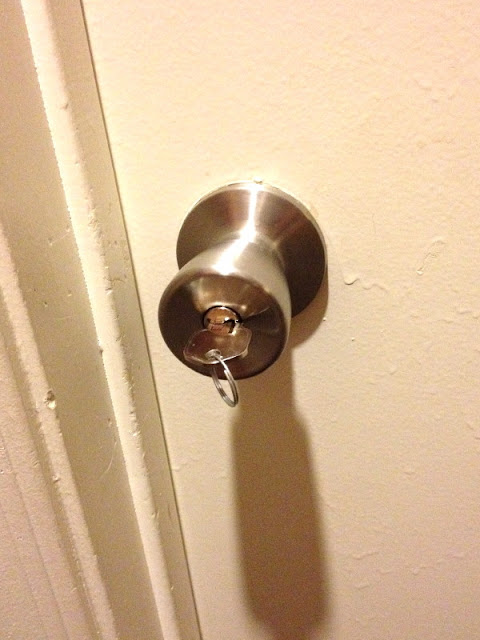 And have you ever had a door in which it's just easier to leave the key all the time?

That's it for me! Let's check out the other Robins' keys:


Sue - Posted!
A picture is worth 1000 words
http://susiesphotospace.blogspot.it/ 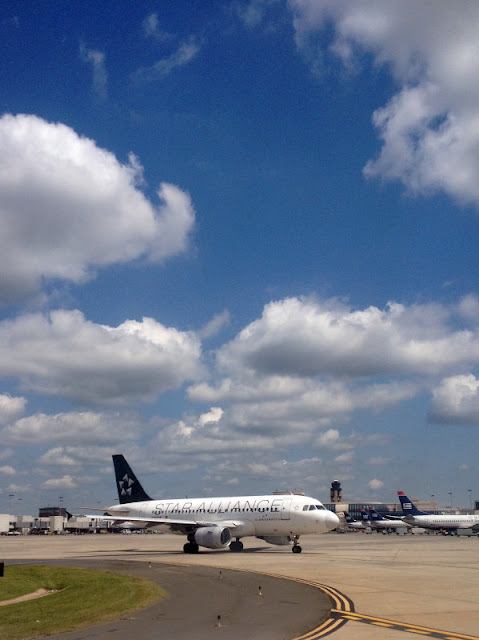 When I announced the Round Robin Photo Challenge: Clouds, it was just two days after my stepmother Ruth's death. The next day I would be flying across the country to Wilmington, NC for her funeral, and I hoped to catch some cloud pictures either in Wilmington or out an airplane window. (Hooray for window seats!) 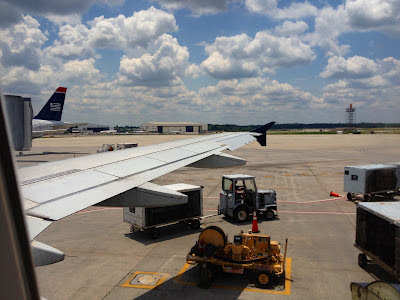 What I didn't realize was that US Airways rules required that my iPhone be turned off for the entire flight. I was only able to catch clouds from the ground with that. I didn't have my Canon camera with me because it was only a short trip, and I was traveling light. 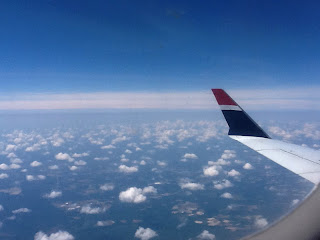 I did, however, have my iPad with me. Because it doesn't have a built-in hot spot, I was allowed to turn it on while we were at cruising altitude and take pictures with it. The iPad was about as big as the airplane window, but I got a few interesting shots anyway. 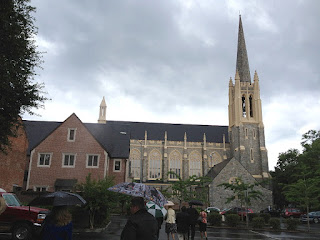 And let's not forget what comes from clouds: rain! We thought the gray, rainy day was appropriate for Ruth's funeral. 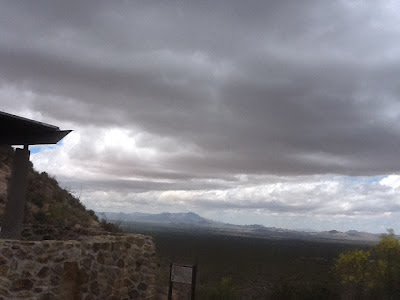 The reason I wanted to photograph clouds out of town is that Tucson's rainy season, the summer monsoon, has not yet arrived. But I did catch some clouds at Gates Pass on a blustery April day earlier this year.

I will be posting more photos from the Wilmington trip on Facebook, Tumblr and Twitter, but this will do for the moment. Check out all of this week's participants!

Sue **Welcome, new participant!**
A Picture is Worth 1000 words
http://susiesphotospace.blogspot.it/

RRPC2: A Variety of Varieties

For the Round Robin Photo Challenge this week, I asked to see "something that comes in a variety of shapes, sizes, and/or colors." I'm going to spread my personal response to this around a variety of social media. For Blogger, I'll just gave you examples of some of the varieties of varieties I found to photograph: 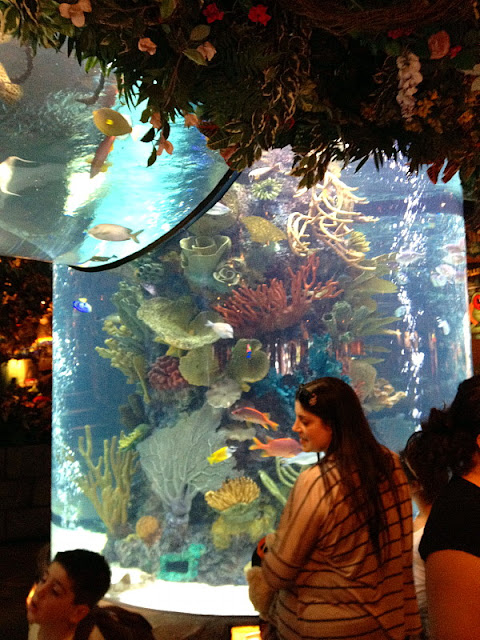 A variety of tropical fish at the Rainforest Cafe at Downtown Disney.
More on my Tumblr. 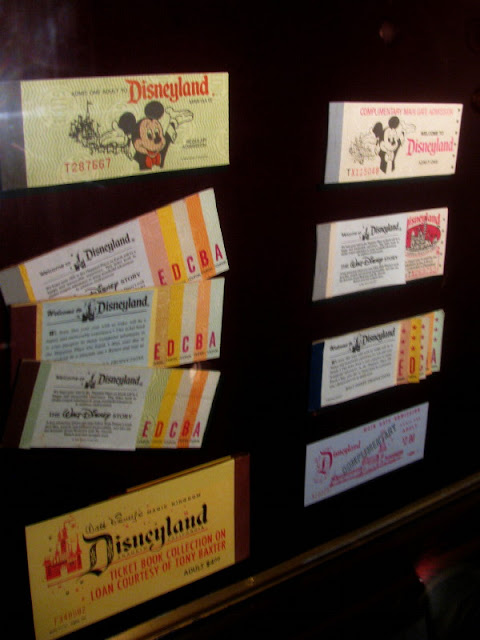 A variety of Disneyland ticket books, from the days of the "E-Ticket."
Another shot is on Facebook. 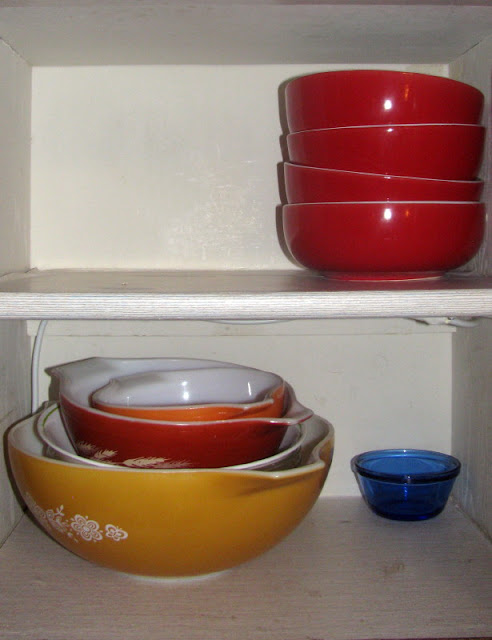 A variety of bowls in our cupboard, after a bit of a purge.
A better shot is on Twitter. 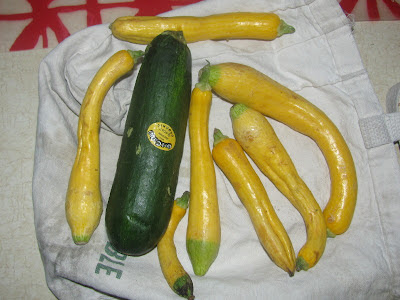 A variety of squashes.

These organic yellow squash come in a variety of sizes and shapes, especially when I throw in an organic zucchini for contrast. These funky little squashes don't taste very good, though. 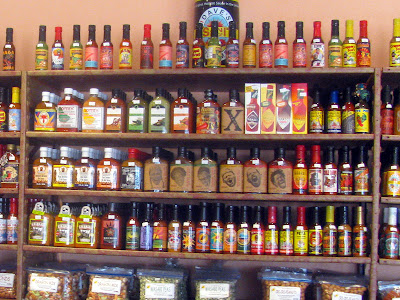 My review of this must-see shop is here. I have a photo up there too, but it doesn't fit the theme. Click on the photo above for a closeup - but actually I'm rather glad you can't read these labels, some of which are quite rude!

Now let's see what a variety of photos other Robins came up with!

As you may know if you follow me on Twitter or Facebook, my stepmother, Ruth Funk, died this morning. She was a good egg. Married to my Dad since the late 1970s, she had a great relationship with him, much better than my Mom ever had. With Ruth at his side, Dad mellowed considerably and enjoyed a long, happy, healthy partnership until last year, when Dad had a stroke and fell into dementia. Until then they had a very active retirement, full of friends and charitable work.

Ruth had suffered from a painful but mysterious urinary tract condition for years, about which she seldom if ever complained. Last month, signs of internal bleeding sent her to the doctor for tests. Result: cervical cancer. I think this was her second week of combined chemo and radiation treatment. When I spoke with her on Monday she was gamely trying to force food and stop the unwanted and dangerous weight loss.

Given Dad's dementia, it's hard to be sure just what happened this morning. Dad told me that he got up around 6 AM and went into the kitchen, where Ruth was in a chair, bent over and vomiting. He tried unsuccessfully to help and they ended up on the floor together. He tried to prop up her head but she breathed out, a long sigh, with no intake of breath to follow. That's when he called my stepsister Jan, who fortunately moved to Wilmington recently to be closer to her mom.

Ruth was my friend, advisor, advocate and ally, and I loved her. I'm flying out in a few days, not just for the funeral but also to consult with my two stepsisters about Dad's care. Ruth told me a month ago that she had always assumed she would be around to care for Dad for the rest of his life. Now she won't be.

My brother was released from a ManorCare nursing facility yesterday, saw a doctor today and is trying to get moved into an apartment this weekend. He's still wearing a defibrillator/heart monitor vest until his cardiologist signs off on ditching it in a few weeks (we hope). I doubt that he's well enough to fly out for the funeral, even if he's so inclined, which he may not be.

John is willing to have us move into a bigger house that will accommodate Dad and Steve living here, if that turns out to be what's best for Dad. I doubt it will happen, but it's a generous thought.