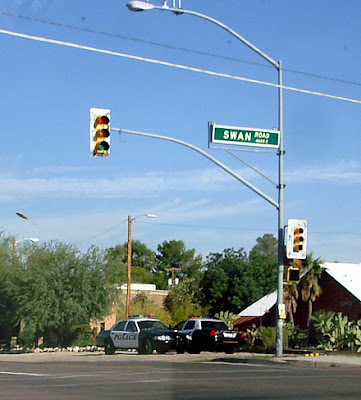 On Thursday night, President Bush (the current one) arrived in Tucson so he could attend a private fundraiser on Friday morning. He flew into Davis-Monthan Air Force Base, which is close to Calle Mumble, and stayed at the swanky Westin La Paloma resort in the Catalina Foothills.

This morning as we took our usual route to work (up Swan Road, left onto Sunrise, right on Oracle at Ina), we noticed numerous police cars parked along Swan, and alleyways and businesses blocked off with police tape and safety cones. We quickly realized that we were on the route the President's motorcade would take back to D-M after his $1,000 a plate breakfast. Oh, boy. We never did see GWB (no loss there), but we sure saw evidence of his presence in the area. 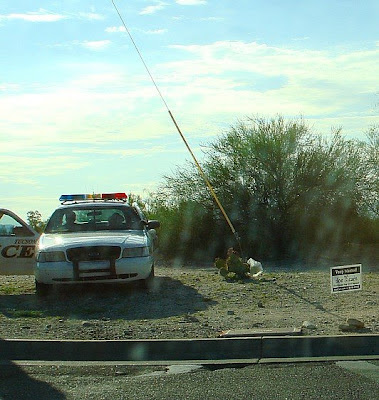 Up near Swan and River, a police car was parked near a sign I've wanted to photograph for weeks. It's that little white sign on the right. I still didn't get a really good shot of it, but it says, 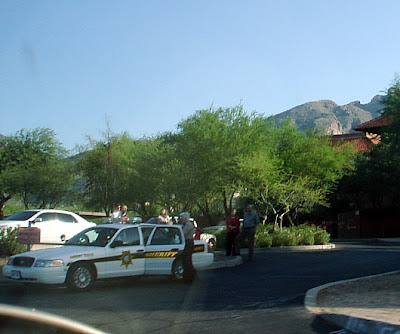 On the Sunrise / Skyline /Ina corridor, the police cars gave way to sheriff cars (county rather than city jurisdiction), and we started to see people "urgently standing" near where the fundraiser for Tim Bee was. John thought it was at the Bell house, built by descendants of Alexander Graham Bell.

Tim Bee is the President of the Arizona State Senate, and always struck me as relatively sensible for a Republican. However, now he's running against my freshman Congresswoman, Gabrielle Giffords, for her House seat. I doubt that Bush will make much of a dent in Giffords' popularity, but I may have to throw some money her way now. Not $1,000, but some. Hey, I like her. She's pro-solar, and has done a good job so far. 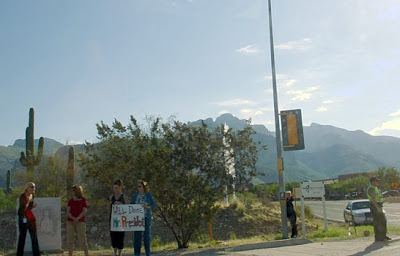 Eventually we started seeing people holding up signs. First it was the pro-Bush contingent, 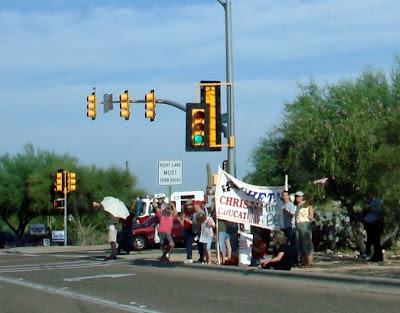 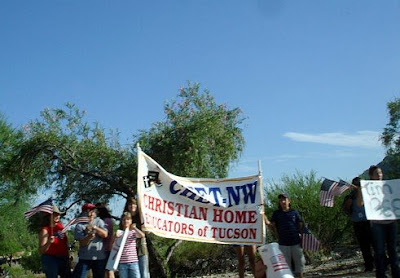 ...who turned out to be home-schoolers. 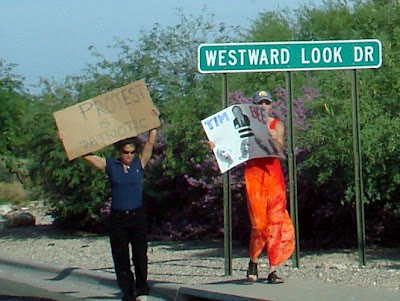 Near the "Well done" group, we saw the first of the anti-Bush folks. 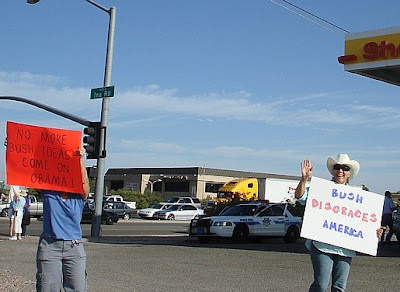 Oddly, though, the vast majority of the Democrats were at Oracle and Ina, well off the motorcade route. I had to wonder whether they'd been deliberately diverted from any place where Bush might see them. 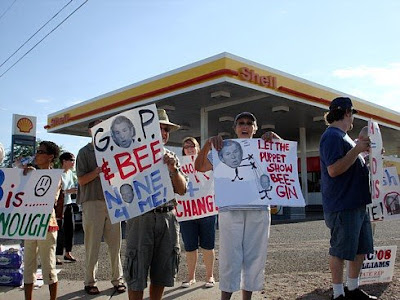 Still, they seemed happy enough to see us!