For the Round Robin Challenge: Theaters, Carly asked to see pictures of theaters or related images. I would love to have done this properly, with a nice photographic study of one or more theaters around Tucson, but alas, it just wasn't possible with my schedule lately. But fear now. We can still put on a show! I have a number of archive photos that I haven't posted before. Let's open the curtains on some local theaters! 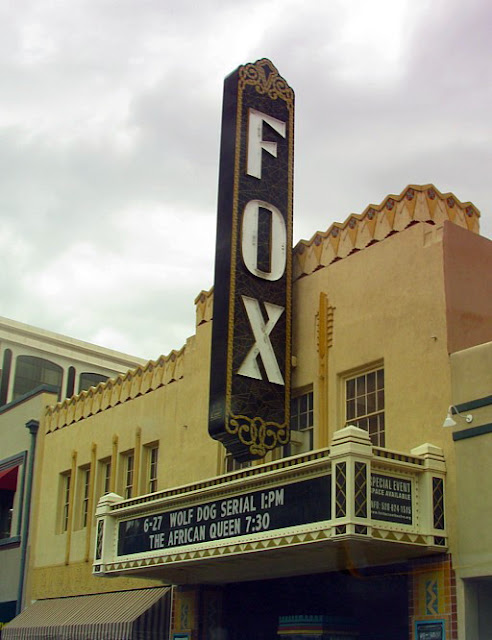 One of the classic movie palaces in downtown Tucson, the Fox, was restored circa 2006. My former employer, First Magnus, helped to sponsor the restoration shortly before the company collapsed in the mortgage but of 2007. This shot is from 2009. 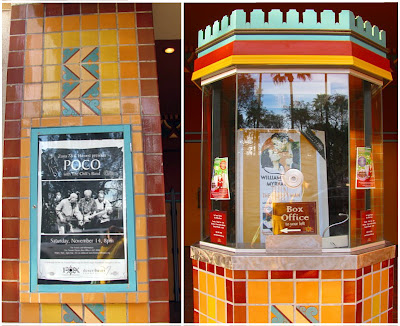 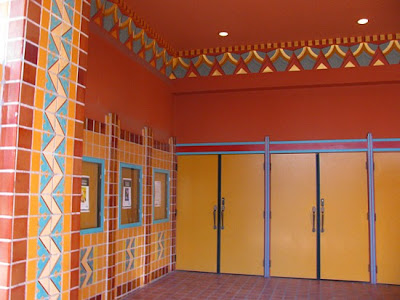 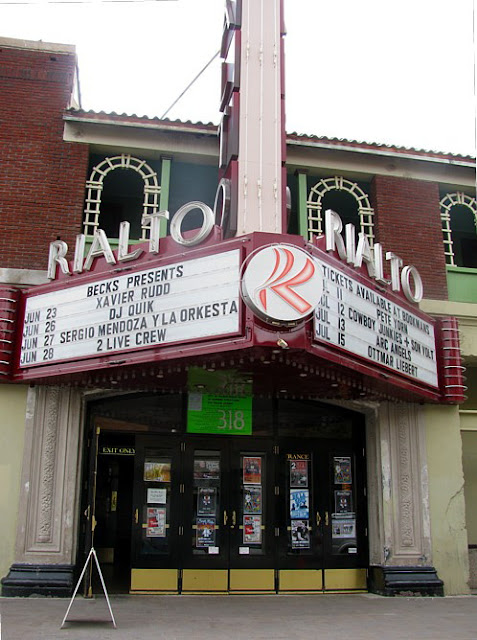 The Rialto is more of a concert venue these days. The guy I helped to find guilty of drunk driving in 2007 had been at a show at the Rialto. I've never been in either that theater or the Fox. 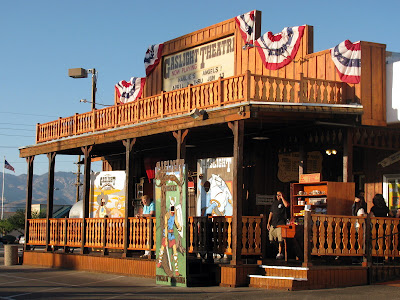 I have been to the Gaslight Theatre, a few times. Their shows are all parodies, full of puns and corny jokes, old style pop music and old fashioned staging with basic cutouts representing cars, horses and so on. I saw a Sherlock Holmes parody one year, and a silly fake Mountie melodrama as a Christmas show another year. The current production is Arizona Smith and the Relic of Doom. 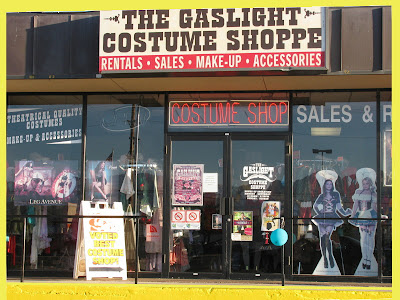 And if you want to put on a show of your own, you can always rent some of the Gaslight's costumes to do it!

So far there are only a few participants this week. How about joining in yourself?

The Line to Hear Rachel Maddow

Here are some shots I took on Saturday night while waiting to hear Rachel Maddow speak about her book, Drift. The venue was Centennial Hall st the University of Arizona. I think this was only my second or third time there, ever. The first time was to see Robert Goulet in a production of Camelot twenty years ago. 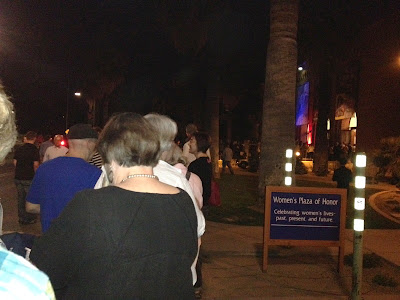 Here is part of the line to get in, which people tried to get around, on the theory that they had their tickets, so why couldn't they just go in? But pretty much everyone had their tickets already. It was sold out, 2,500 tickets. I thought it was appropriate that we passed the Women's Plaza of Honor on the way to the Centennial Hall entrance. 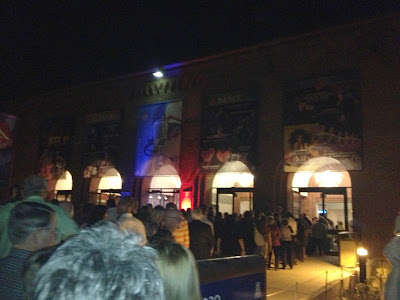 I never managed to capture the size of the crowd with my iPhone camera, but this gives you some idea. 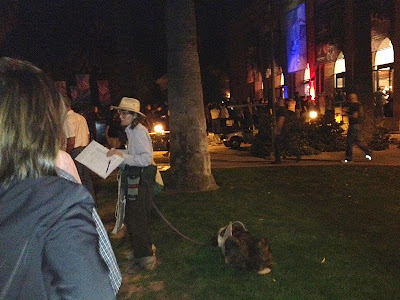 An activist for the Green Party did her best to interest people in her petition as they passed by. Her dog wore a placard promoting the petition, but seemed personally uninterested in participating. 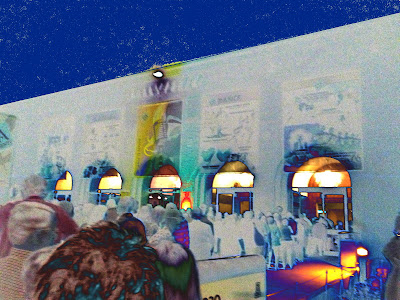 I just thought it would be fun to use a few FX on this shot. 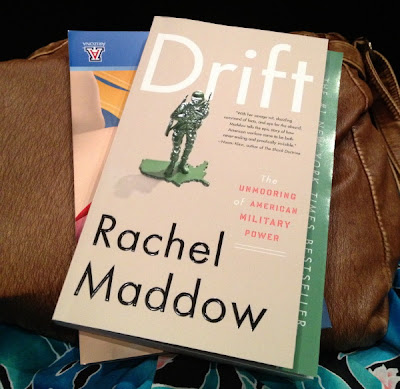 One reason it took so long to seat 2,500 people was that most of the tickets included a copy of Drift in paperback. So they had to read each ticket to make sure the person was eligible for the book, give them the book and punch the ticket to prevent double dipping. Then they had to direct the person to the right entrance, where a fourth person handed out programs and a fifth directed the ticket holder to the correct seat. Quite a production!

Rachel Maddow got a long standing ovation at the beginning, and another at the end. Reference was made to a "blue dot" in a "red state," but this was more like a large, bright blue bubble. Rachel was her usual smart, funny, humble, endearing self. Foreign policy isn't an area in which I have a strong interest and expertise, but I do think the point she makes in her book is a valid one.

After she talked for a bit, she sat with a U of A professor who moderated and read out questions submitted beforehand. Most of them were from U of A faculty, but that's okay. It was over all too soon, but considering the speaker had laryngitis it seems churlish to complain. It was still an enjoyable and thought-provoking evening.

Round Robin: Dig the New Threads!

For this week's Round Robin Challenge: Threads, Carly asked to see, well, threads! Hmm. I can show you my sewing box... 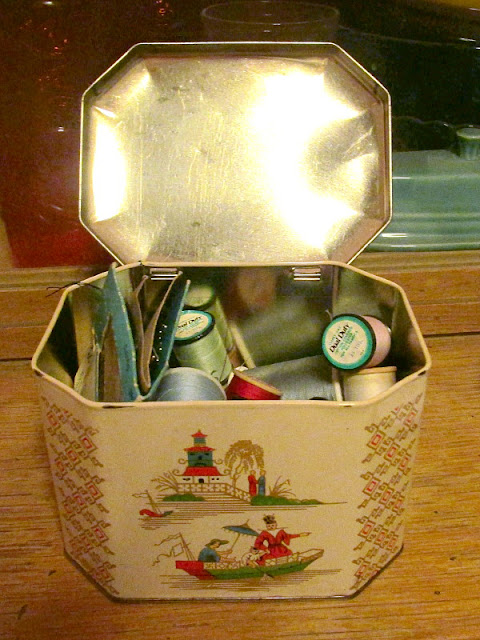 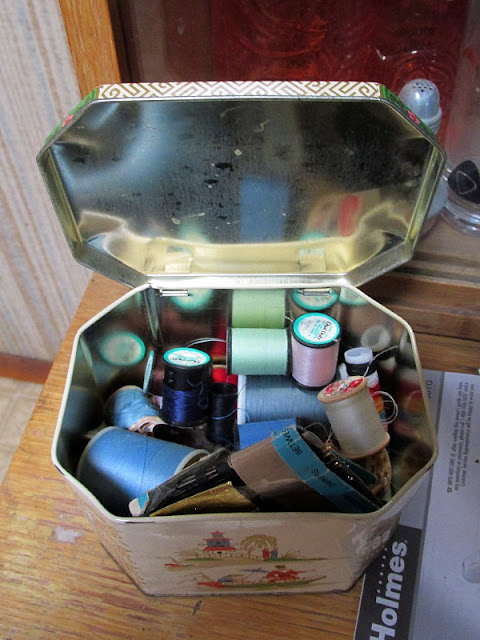 ...but I actually had a few other ideas in mind. I'd love to show you the entire thread cupboards my late stepmother Ruth had in Wilmington, with spool after spool organized on rows of spindles; but I was actually between cameras when I was at Dad and Ruth's old place for the very last time this past December. Too bad, because it was amazing! And I say that as someone who got a D in sewing in 8th grade Home Ec!

I was also thinking about the old hippie-era slang term threads, as in clothing. I had to buy some new threads this week, because a) I gave away almost all my short-sleeved tops last year due to weight loss, and had basically nothing left but Hawaiian shirts, and b) there were VIPs coming through at Job #2 on Wednesday and I needed to look presentable. So I got these: 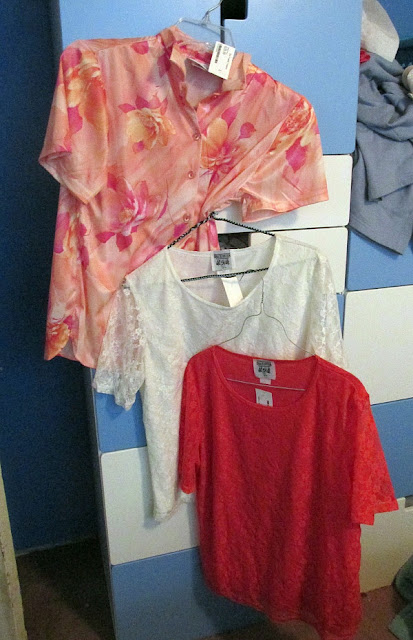 But I'm not the only one I know who got new threads recently. Mother Clare at St. Michael's got a set of new vestments from the Benedictine Sanctuary a week or so ago. St. Michael's had lots of vestments already, in different colors for different ecclesiastic seasons; but they're all for tall men, not somewhat-short women. Mother Clare needed something she wasn't going to trip over. Here she is in her new threads at Easter Vigil: 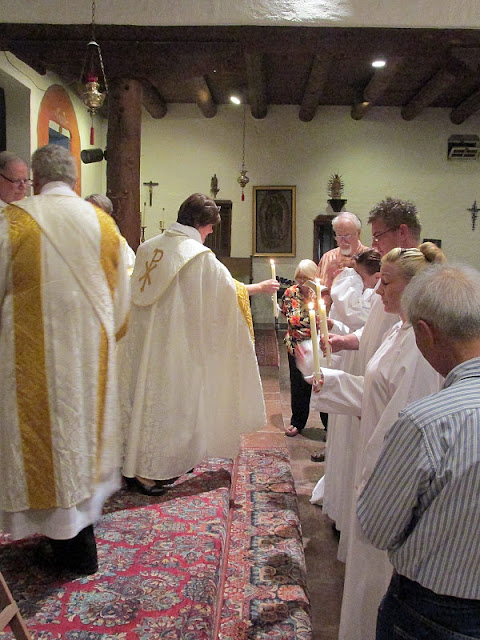 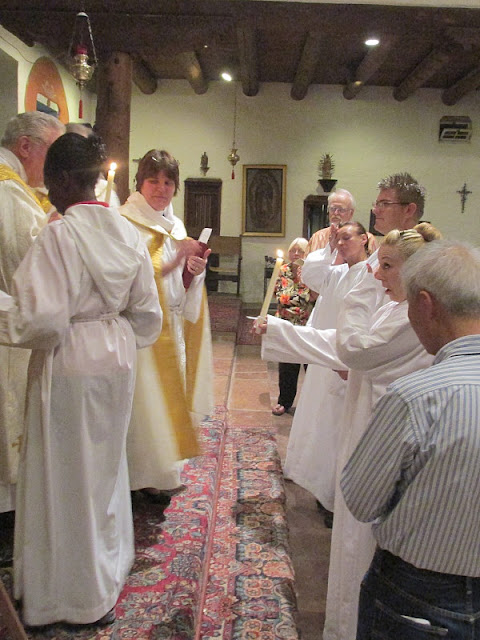 I think the Benedictine Sisters did a nice job on these threads. They certainly used a lot of threads to do it!

Oh, and by the way, the people on the right, the ones dressed in white, are also wearing new threads here, in honor of their baptisms a few minutes before these photos were taken. But they're just in albs, nothing fancy.

I will try to make the rounds this weekend, but I'm going to be fearfully busy. Thanks again to Carly for hosting this week! 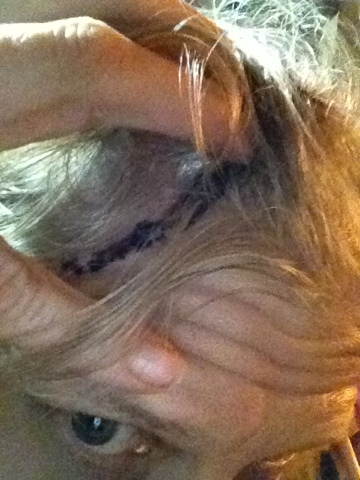