For the Round Robin Photo Challenge Lights! Camera, Action! I gave three choices on how to fulfill the topic. Considering that nobody else has signed up to do this Challenge so far, let's see whether I can cover all three ways myself!

1. "These are the classic words directors used to start filming a scene, with the lights lighting, the camera rolling and the actors acting! But it occurred to me the other day that the combination of lights, camera and action can be something else entirely. Think of the way the lights of moving cars can streak colors in a photo with a long exposure, or the excitement of lightning captured by a camera as it crosses the sky. Falling meteors, still lights photographed by a camera in motion - all of these combinations and more can lead to some interesting effects!" 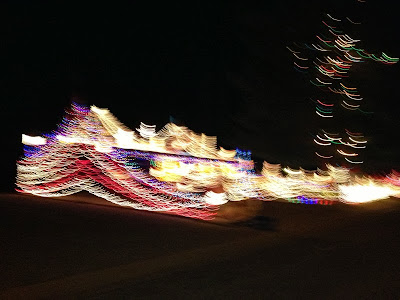 This shot of the neighborhood Christmas house is from December 2012. I didn't use it last year, and nothing I've photographed this year illustrates what I meant so effectively.


2. Alternatively, you may prefer to make a little foray into the motion picture business yourself! Most digital camera and camera phones now have video capabilities, and you can put together simple short movies with all sorts of software and smartphone apps these days, such as Majisto, iMovie, Windows Movie Maker, and social media quickies such as Vine and Capture. Google+ will even make little almost-movies automatically from a series of related photos, although these can only be viewed on Google+ itself.

I'll add a little video later, but for now here is one of those Google motion things, if I can make it work!


Back in 1992 I was on the Universal lot as Scott Bakula and Max Wright (of ALF and Misfits of Science) shot a scene for Quantum Leap. This is my favorite shot from that day: 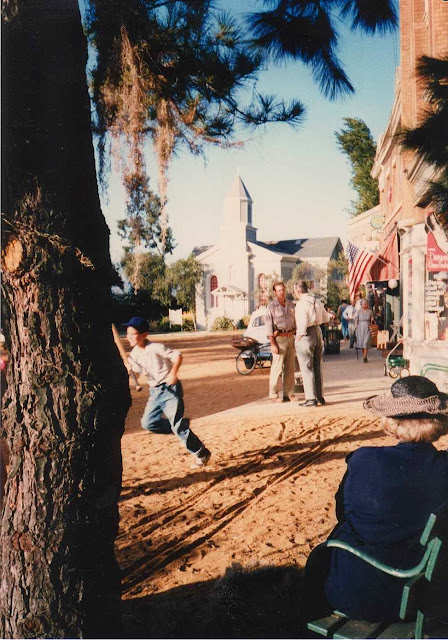 It's even an action shot!

Links to this post
Email ThisBlogThis!Share to TwitterShare to FacebookShare to Pinterest
Labels: Action, memes, Round Robin Photo, Video

For this week's Round Robin Challenge: Pretty Paper, I asked to see any kind of pretty paper, such as stationery, art prints, children's drawings, and so on. The original inspiration was holiday wrapping paper, and of course I have several examples of that: 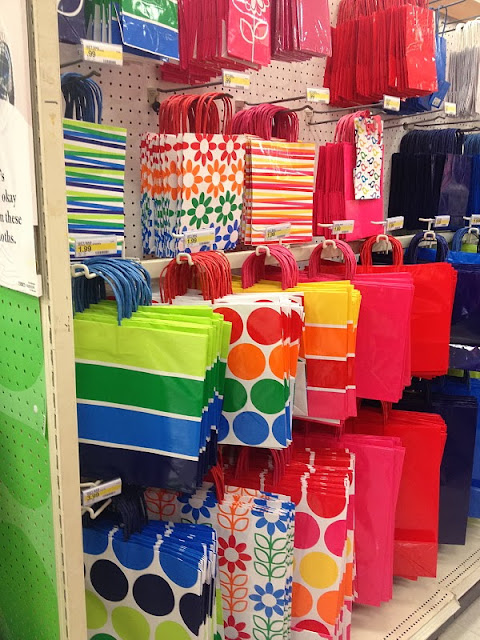 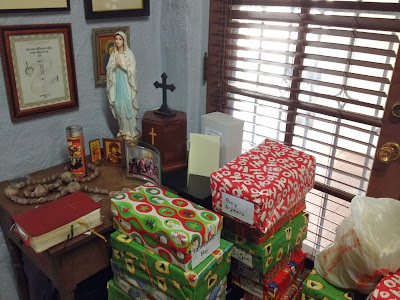 Let me explain that second one. "Fr. Smith’s 15th Annual Pantano Rotary Shoebox Project is underway bringing joy to children in Nogales, Sonora, Mexico. These children live in makeshift houses on hillsides around Nogales. Many of these households have no one employed. This is a THREE-NATION effort for 600-800 or more filled shoeboxes – infants through 12 years and 500 blankets. Warm mittens, caps, toys, etc can fill the wrapped shoe box with top lid NOT attached to the bottom (border inspection). Blankets may be new or used and if used must be dry cleaned (leave cleaning tag attached). Shoeboxes need to be returned to the Parish Office no later than Sunday, December 15. Blankets need to rolled like a bedroll and tied with twine or ribbon. More information in back of church." The boxes shown were in Father Smith's office as of a week ago.

Really, though, wrapping paper isn't usually too exciting. How about this, then? 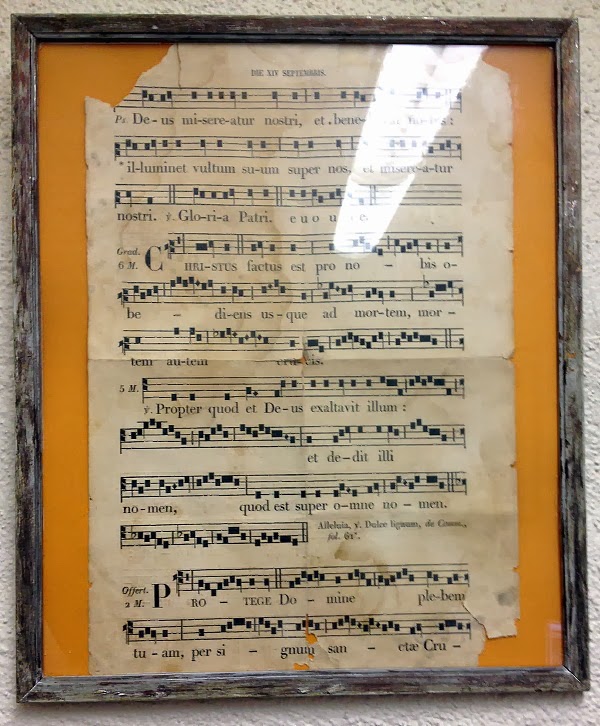 Yes, it's old and ragged and torn, and even the frame is junky-looking. But there's a certain beauty in the very idea of it, this page of sheet music that could be more than a century old. Or not.

No? Then let's go with these: 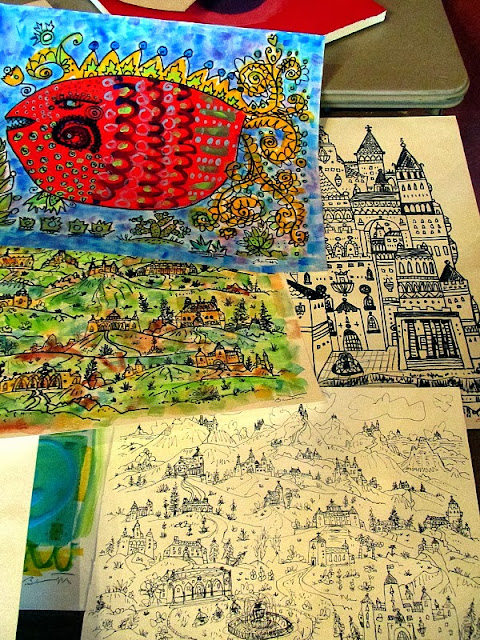 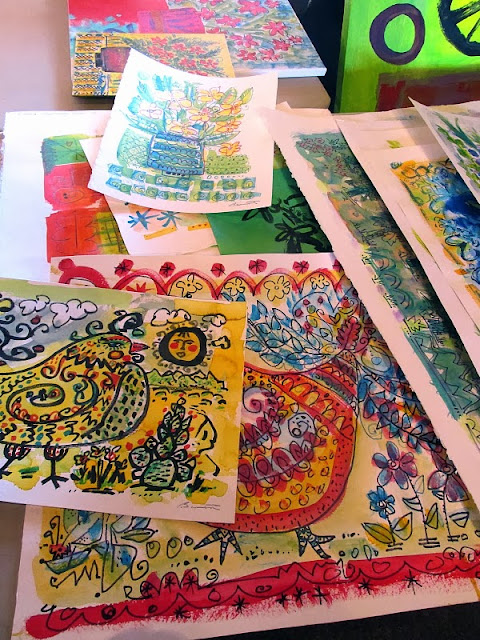 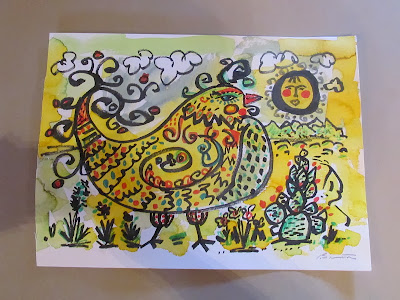 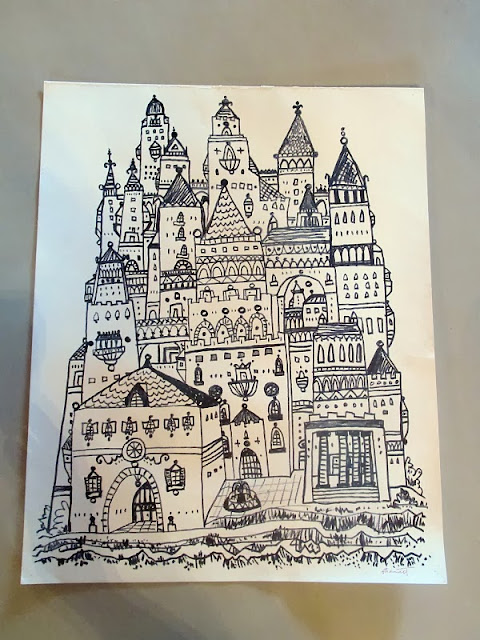 These are drawings, paintings and prints by an artist friend of mine, Bob Bennett. They were available for sale at St. Michael's recent Advent International Bazaar. His art is cheerful, colorful, whimsical, wonky and highly creative. As paper goes, this is much prettier than the stuff you wrap presents in!

Check out all the Robins' entries this week!