Round Robin: Give It Up - For Good

For this week's Round Robin Challenge: Give It Up!, I asked to see "something you've given up at some time in your life, or would like to give up, or wish someone else would give up." I could maybe get clever or esoteric or, more likely, depressing on this one, but let's go with the obvious for once. Where does a successful dieter go to look at all she's given up? Why, the supermarket, of course! 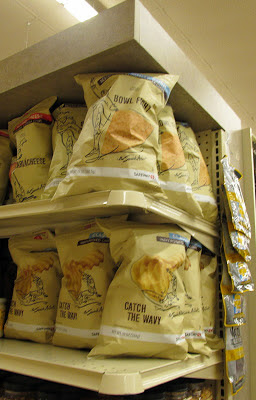 In July 2011 I gave up high carbohydrate foods. I've since lost over 130 pounds, but I've been stuck at 170 pounds since December. I've going to have to give up carbs even more stringently. Part of the problem is I had to give up running, or even walking long distances, after injuring my right knee. 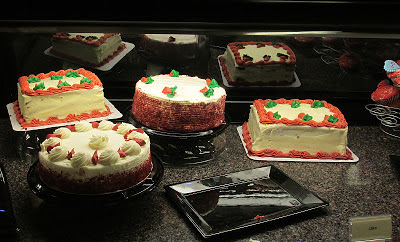 The empty plate here had a little round layer cake for one yesterday. I bought it for my dad's 90th birthday, deliberately small because we can't help him eat it. He didn't eat it, either. Tonight my dad is in intensive care, but not because of some food he ate or didn't eat. 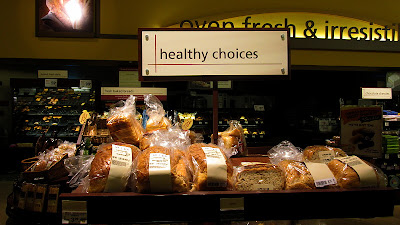 My healthy choice is not to eat even "healthy" bread. 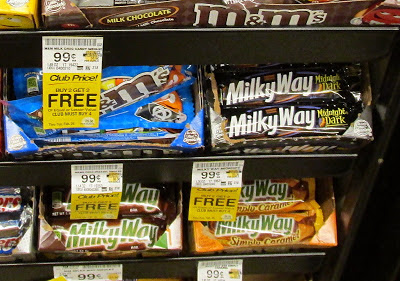 And my candy consists of one or two squares of sugar free dark chocolate per day, and maybe an Atkins bar.

Please visit the other Robins' entries, and comment if so moved. The list of entries is below, but please do check the Round Robin blog for any updates and late additions:

Sue.
A Picture is Worth 1000 Words.
http://susiesphotospace.blogspot.it/

I have a defensive driving class in the morning and my dad is still in intensive care, so I won't be around much this weekend. I'll try to check in when I can!

Round Robin: Frozen in Time

For Round Robin Challenge: Frozen, I asken to see anything frozen, literally or figuratively. I was expecting a literal interpretation for my own entry, even if it meant resorting to something like this: 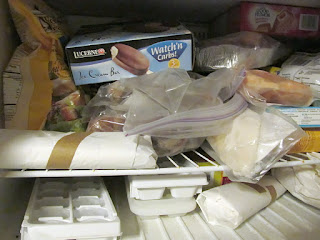 This is my freezer tonight, full of freezer-burned meat, a few low-carb ice cream bars and a box of Good Humor bars to take to my Dad. Maybe tomorrow I'll have a new snow-on-the-Catalinas shot for you, but I'm not concerned about that right now.

What I want to talk about tonight is the freezing of a moment in one's memory - the freeze frame of a camera, the click of a shutter freezing that moment forever, or at least until the photo gets lost or the file gets corrupted. Or maybe it doesn't take a camera. The sight of something wonderful, or awful, funny or sad or ordinary, hits the eye and a synapse is formed to preserve the moment, probably imperfectly, in the human brain, at least as subject to degradation as the photograph would be. We can throw away pictures or frame them, but how much of a choice do we have as to what gets frozen in our memory? 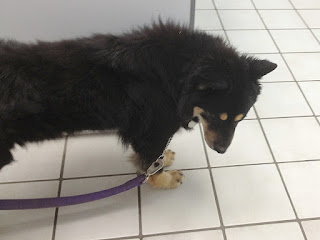 Here is a moment that is frozen in my memory. This is my dog Pepper as of January 22nd of this year. Just out of frame is a wet patch of Pepper's bloody diarrhea, the first I had seen from her. She was already emaciated and not eating. One of her vets wanted to take out her enlarged spleen, not to cure her but mostly just to diagnose her. The other vet wanted to treat the latest health crisis indicated by the wet spots on the exam room floor before doing anything else.

Tomorrow morning, we're putting Pepper to sleep. She is in liver failure, her red blood cells, platelets and blood sugar are low, she's vomiting and dehydrated and her spleen, now even bigger, is pressing on her stomach. It doesn't matter that we never had the $2000 operation to take out the spleen. We could not have saved her. John is devastated, and so am I. "But it's Pepper! It's not fair!" he kept saying tonight. 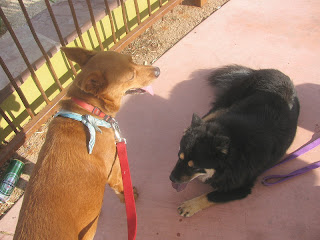 This is the memory I would rather have frozen in my brain and on my blog: a sunny Sunday morning at Pantano River Park last summer, with the dogs panting but happy as we take a quick rest before returning to the car. I have to remember that Pepper had four good years with us before the last three months of awfulness. 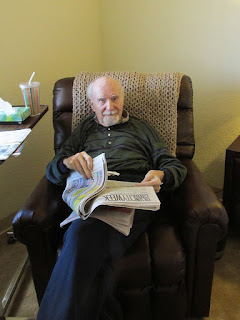 And here is another memory to preserve, whether for good or bad I can't say yet. My dad arrived from North Carolina two days ago. He has little or no idea that the memory care unit at The Cascades here in Tucson is his new home, and probably has little idea who I am. He knows he has four children (actually a son, a daughter and two stepdaughters), and probably figures I'm family, maybe even one of the daughters. My calling him Dad all the time should be a clue, but we can't count on anything like that sinking in. But here he is, friendly and reasonably content after two days recovering from the stress of flying across the country to an unknown destination for an unknown reason. No doubt I will get used to his being here, used to his dementia, used to being a caregiver again, ten years and a few months after my mom's death. And I will probably be grateful for the memories I make now, finally spending time with him after decades of living at opposite ends of the country. But right now, this is not the memory I want, not the image I want frozen in my brain. Tough luck. It's what I've got. Along with the image of the emaciated, sweet, stubborn dog I have to say goodbye to in the morning.

With any luck, the other Robins' entries will be less depressing: