Round Robin: Snow and Other White Stuff

For the Round Robin Challenge: The White Stuff, I asked to see photos of anything white. My inspiration was a trip up Mount Lemmon a couple of weeks ago, for the purpose of visiting snow. I'll show you the best of my photos from that day - unfortunately taking from a moving car using an iPhone - but let's start with a few other examples! 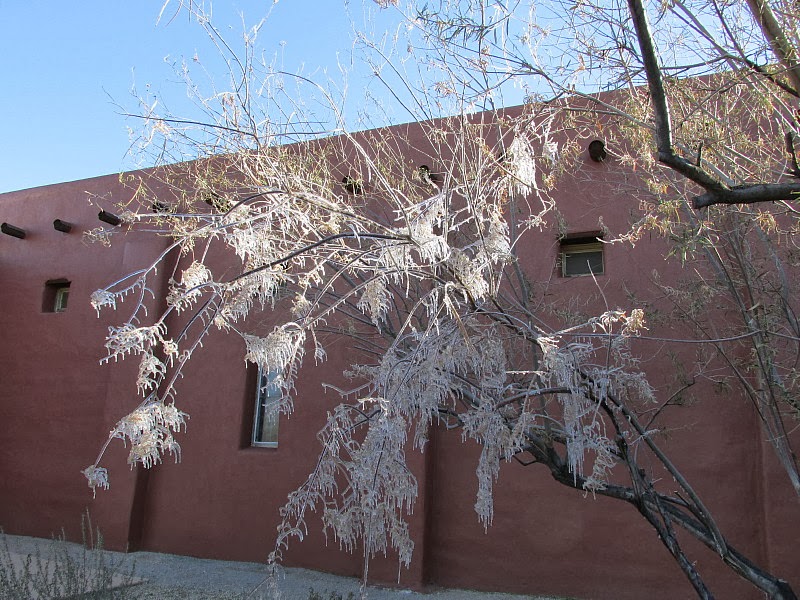 A year ago I photographed a different kind of white stuff: ice coating a tree outside St. Michael's. 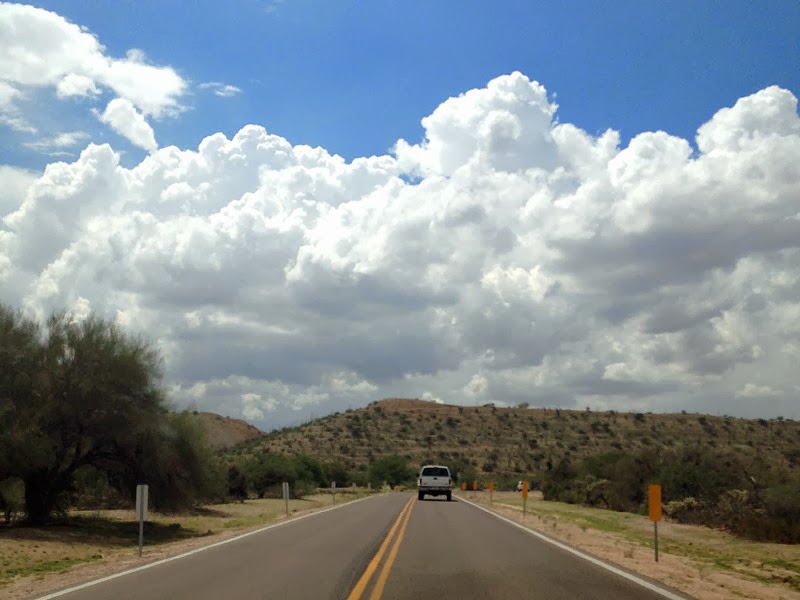 I grew up outside Syracuse, NY, where there is lots of snow and ice - not necessarily at Christmas, but frequently from October to April. When I got married, I moved to Columbus, Ohio, which is a lot like Syracuse. When John came into a little bit of money in 1986, we drove around the country looking for someplace it wasn't winter. Tucson is where we ended up. It only snows in the city once every two or three years, and never stays on the ground more than a few hours, or overnight at most. And if it gets to be winter, and one finds oneself missing snow, it's just an hour's drive away - up Mount Lemmon! 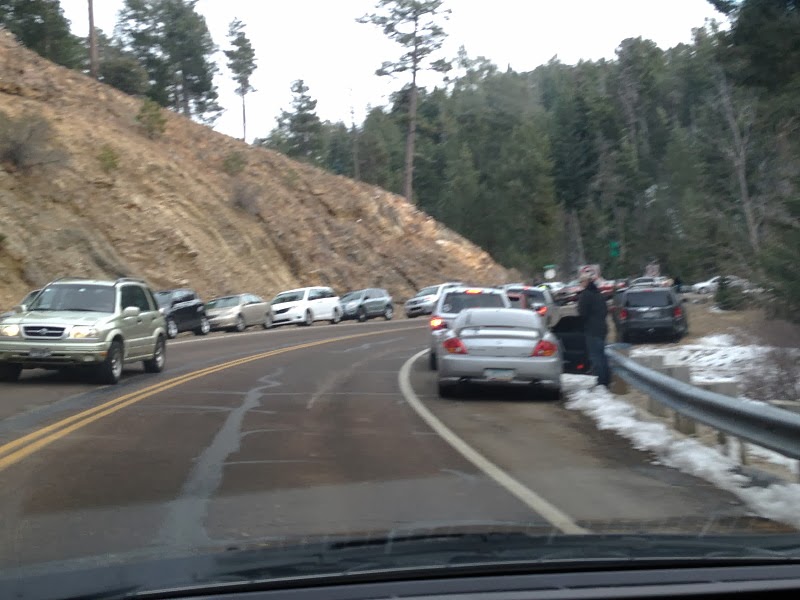 Okay, it's not quite that easy. There's no snow on the mountain without a storm to drop it there, and when that happens they block access to the mountain (except to local residents) until the roads are clear again. A few weeks ago, the conditions were right. I had seen snow on the mountain from afar, and the road had been blocked. But time had passed, and the road was open again. So I drove Dad up to see it. And it turned out, I was far from the only person with this bright idea!  One stretch of Mount Lemmon Highway was lined with the cars of other people, who had all come to "visit" the snow! 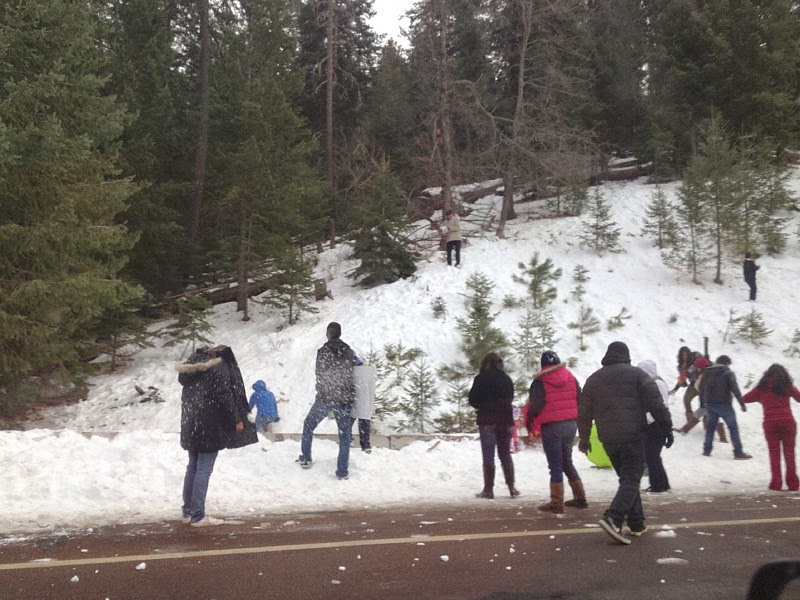 We didn't check out the right hand fork at the very top of the mountain, site of the southernmost ski resort in the continental U.S. It didn't matter. Several miles below that, around the next bend from all the cars, was a winter wonderland of sorts. It wasn't exactly Vail, but it wasn't bad! People were flocking to the spot to play in the snow. What I especially like about this particular picture is the dusting of "white stuff" on the jackets of some of the snow bunnies! 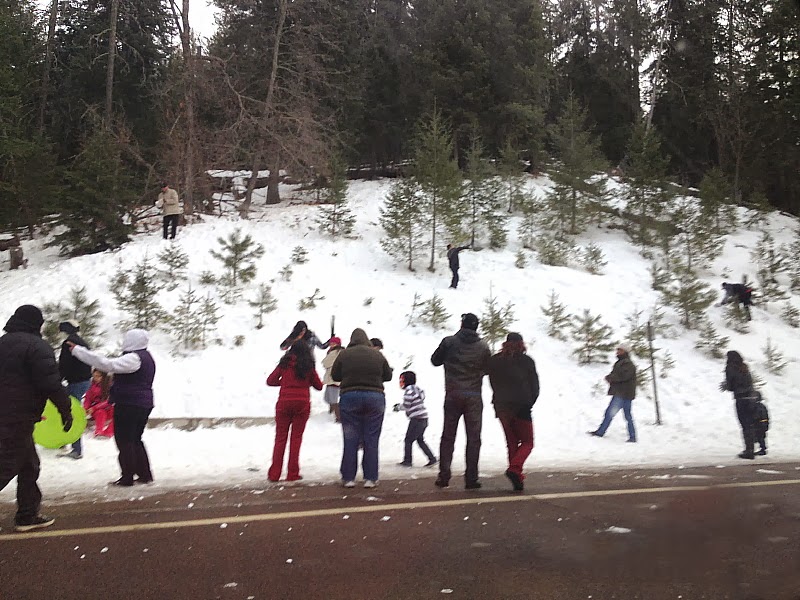 Rounded patches of white stuff on the road testified to the throwing of numerous snowballs. 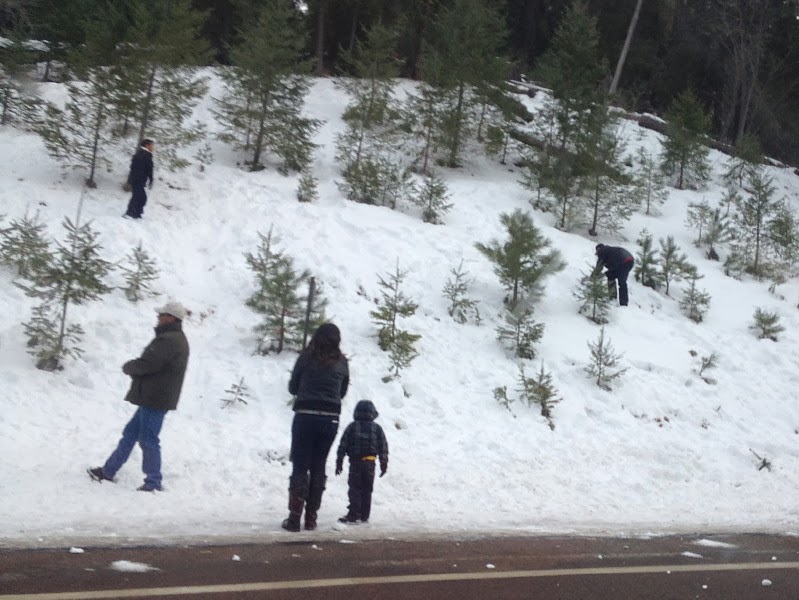 Some people had climbed the hillside, probably with the intention of sliding down again. 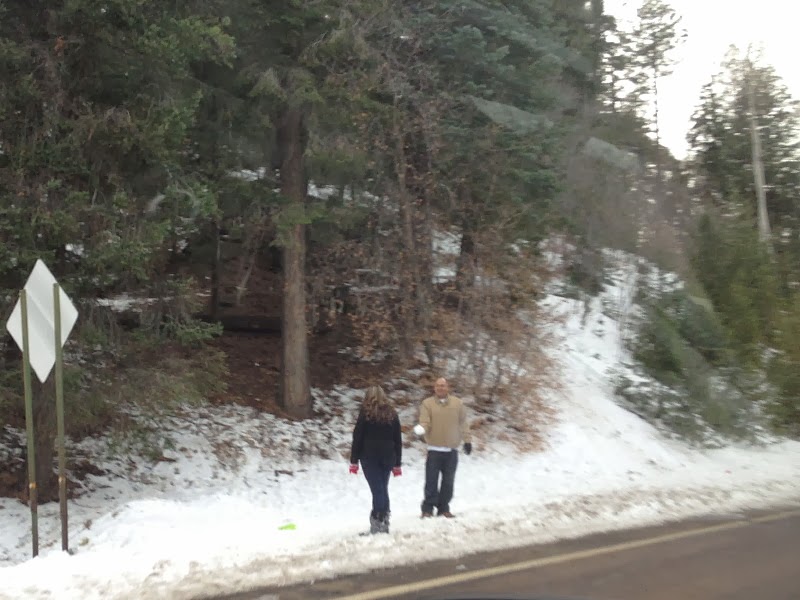 And I particularly enjoyed seeing this couple. "Look, honey! I made a snowball! Do you want me to throw it?"

Now let's see what "White Stuff" the other Robins saw!

Links to this post
Email ThisBlogThis!Share to TwitterShare to FacebookShare to Pinterest
Labels: memes, Round Robin Photo, Snow, Tucson Snow

Round Robin Challenge: Looking Ahead

For this week's Round Robin Challenge: Looking Forward , I asked to see photos looking forward, preferably metaphorically as well as visually. The topic reminds me of that old Johnny Nash song: 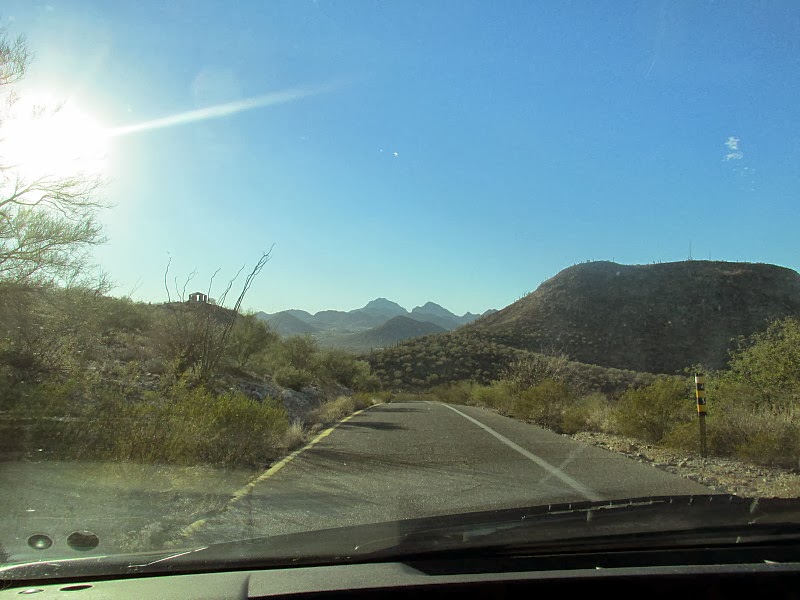 I can see clearly now, the rain is gone,
I can see all obstacles in my way
Gone are the dark clouds that had me blind
It’s gonna be a bright, bright Sun-shiny day.

Wouldn't that be nice!

But the problem is, we usually can't see the road ahead very well. It may be full of twists and turns, so that the view is intermittent at best... 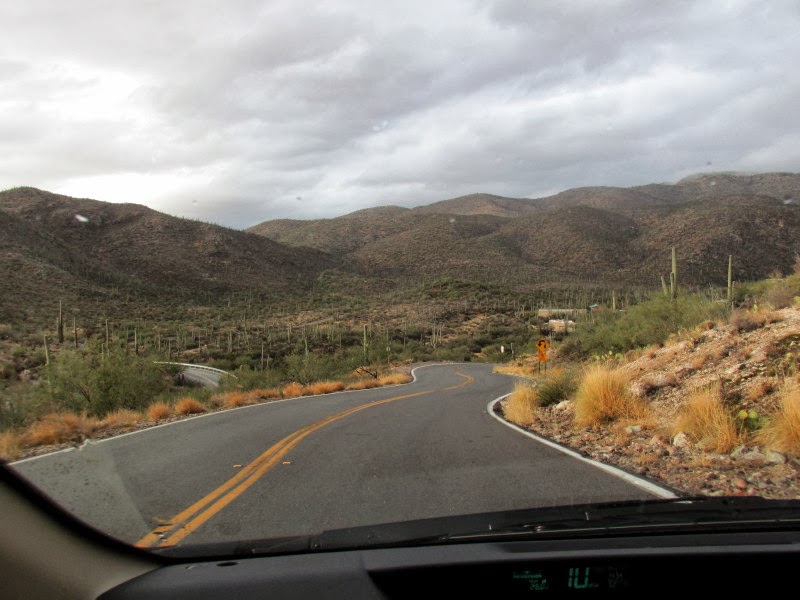 ..and the drive may be steep and hazardous. 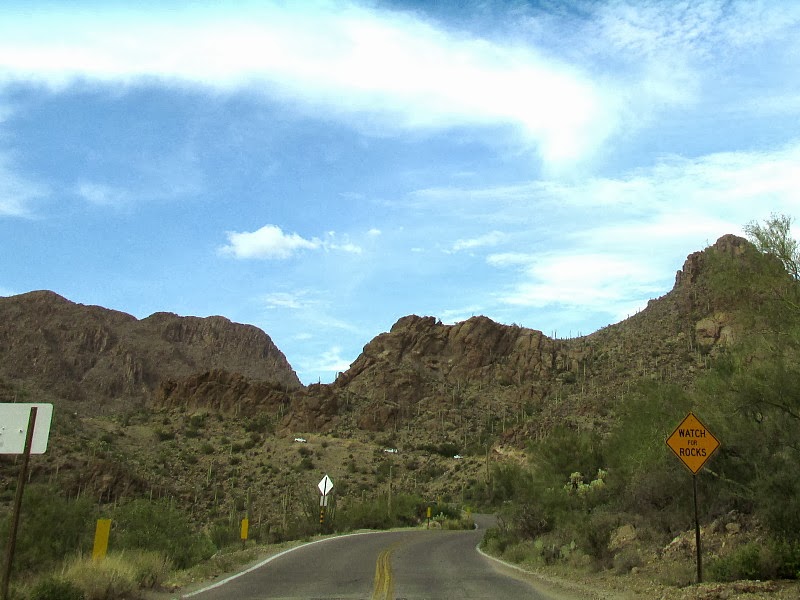 Sometimes the signs are frankly confusing, and it looks as though no progress can be made at all. 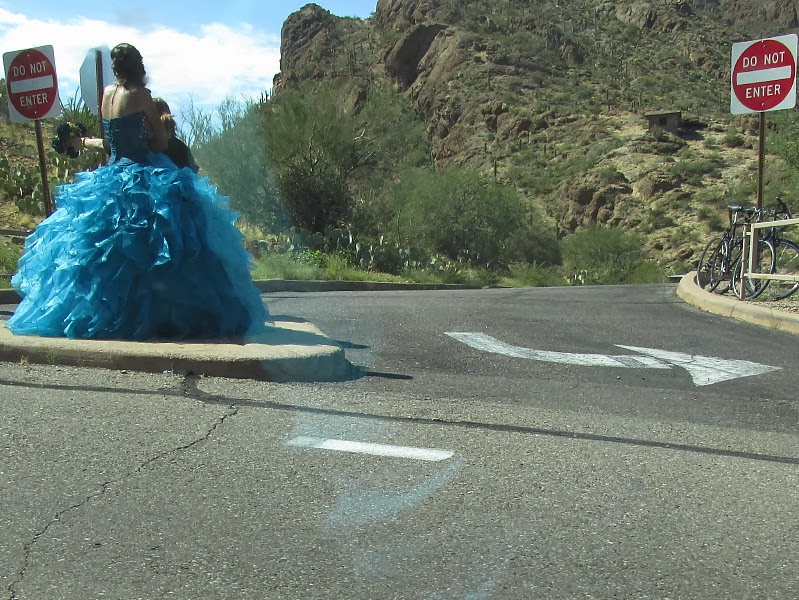 The path may be narrow, and lead straight into the weeds. 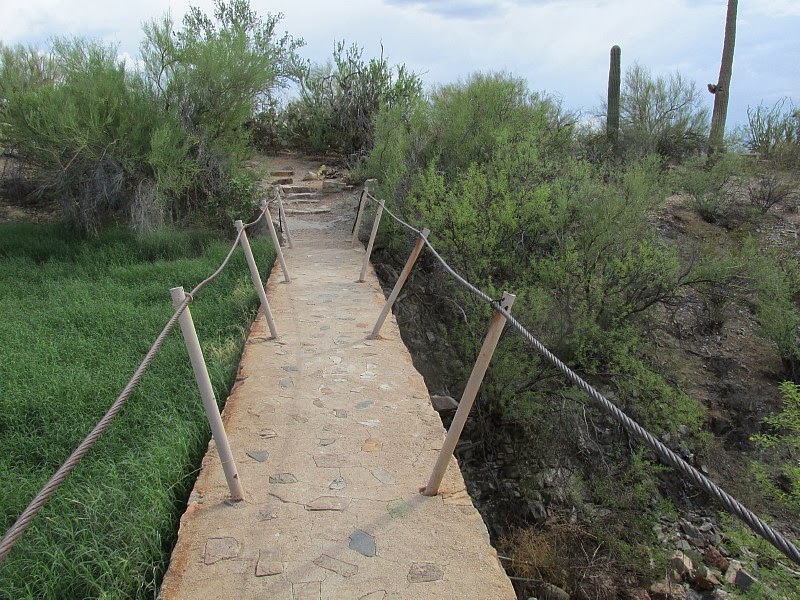 It may lead somewhere dark and dreary... 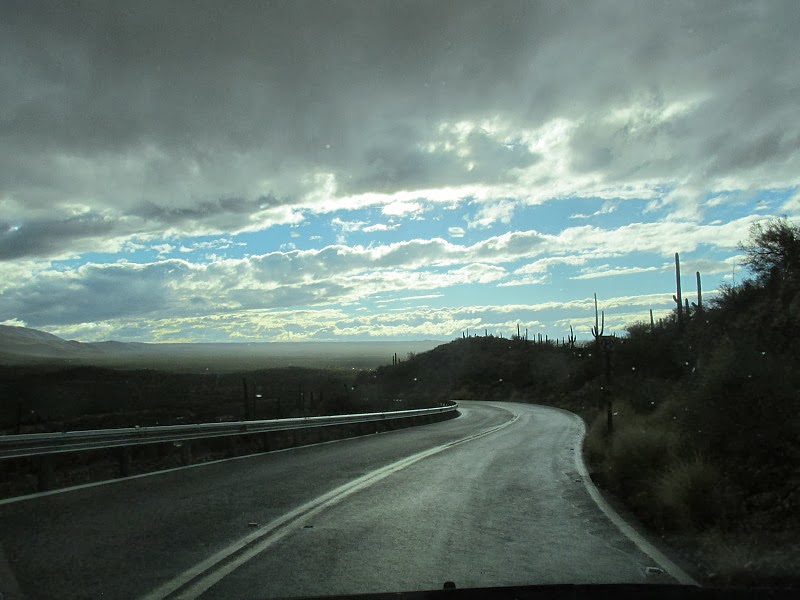 ...and, of course, into life, a little rain must fall. 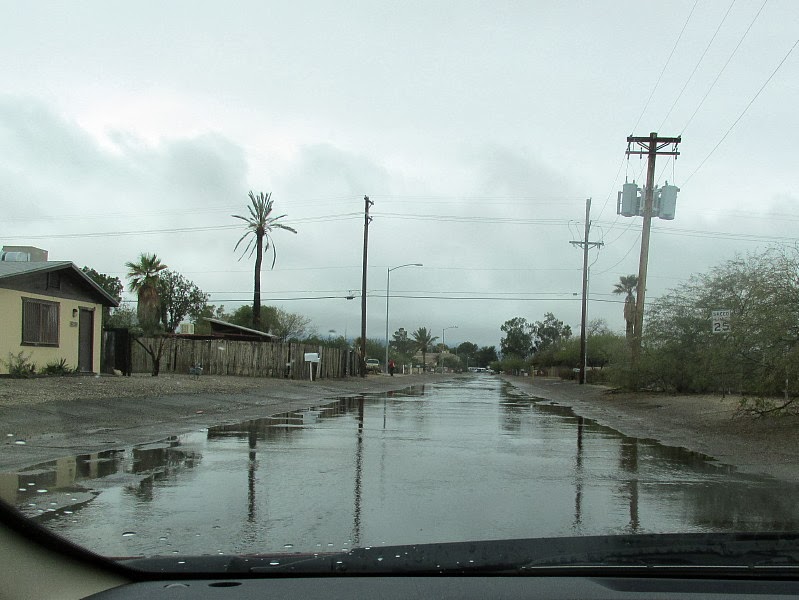 Even if the musical cue is The Who, and I can see for miles and miles... 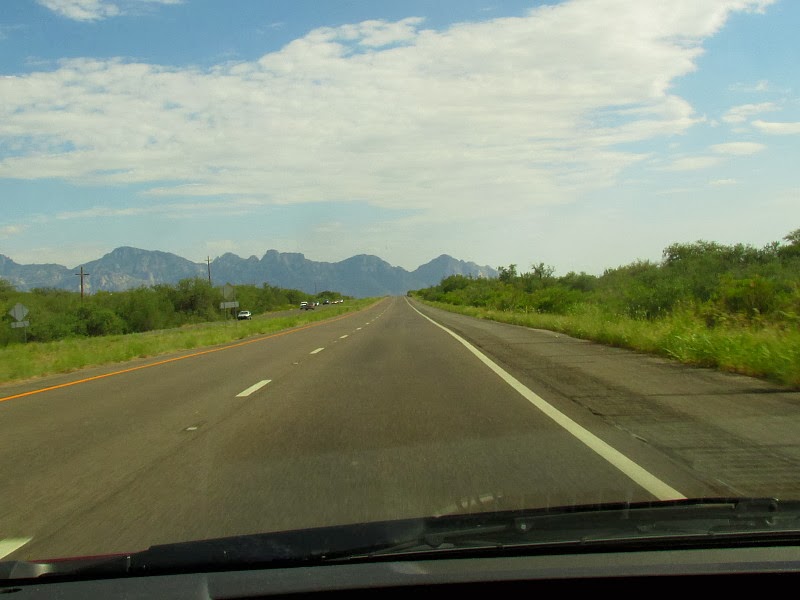 ...it comes to a vanishing point. I still can't see the destination.

I have a choice to make, and I can't see the road ahead very well at all. That is, I can see the road I'm on, but it's kind of harsh and rock-strewn, and not much fun at all. Is there an intersection up ahead? Dare I turn off? Would the new road be any better?