Round Robin: Tangles of Branches

This week's Round Robin Challenge: Branches doesn't really need explaining, does it? Let's get on with the pictures! 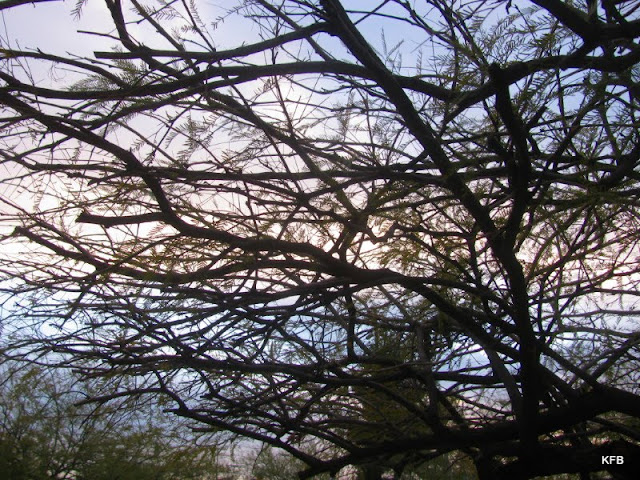 An intricate tangle of branches stands out against bands of color in the late afternoon sky. 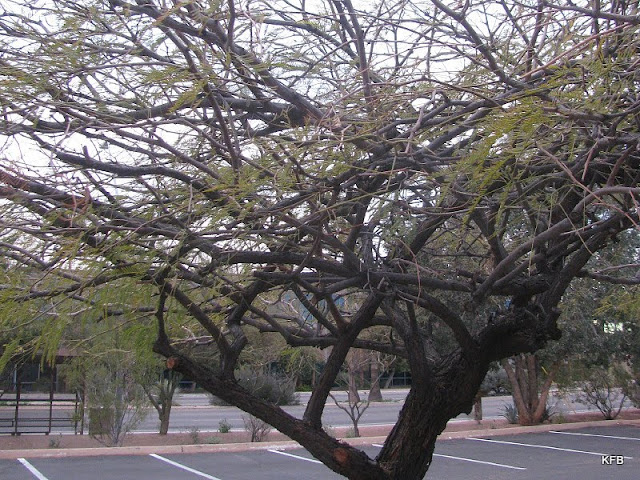 I think these are olive trees, but the shapes and angles remind me of bonsais,
or trees in Japanese paintings. 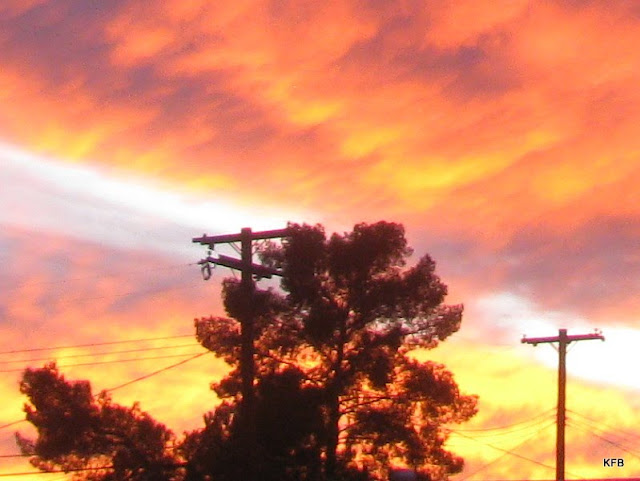 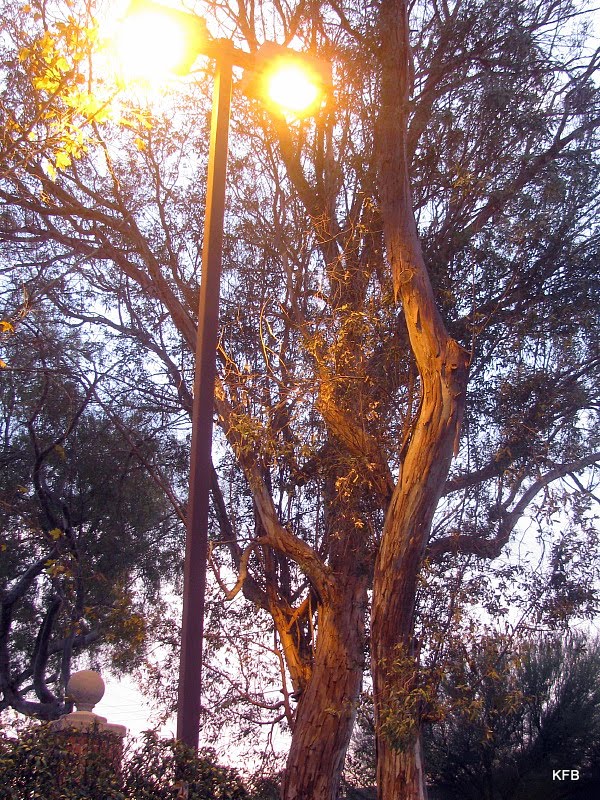 Branches illuminated by a streetlamp at sunset.
Karen

Now let's see what the other Robins branched out with!

Links to this post
Email ThisBlogThis!Share to TwitterShare to FacebookShare to Pinterest
Labels: Branches, Round Robin Photo, trees

Round Robin Challenge: House Is a Museum

The Round Robin Photo Challenges topic this week is "Home," a word I have a rather different perspective on at the moment. Normally I go on about Casa Blocher, the Museum of the Weird, and I did indeed take some pictures of our household oddities for you, . But if you read my previous entry, it won't surprise you to learn I have a more serious theme in mind as well. 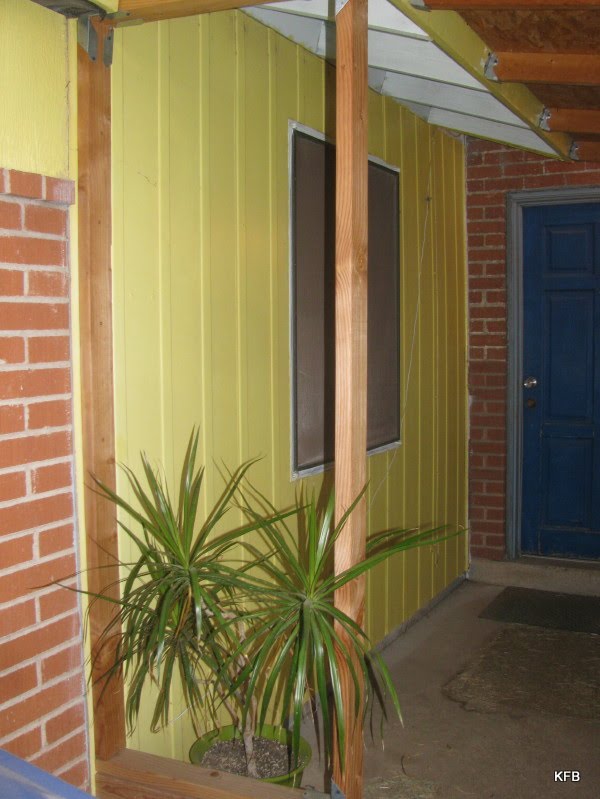 Let's start with our house. Come on in! 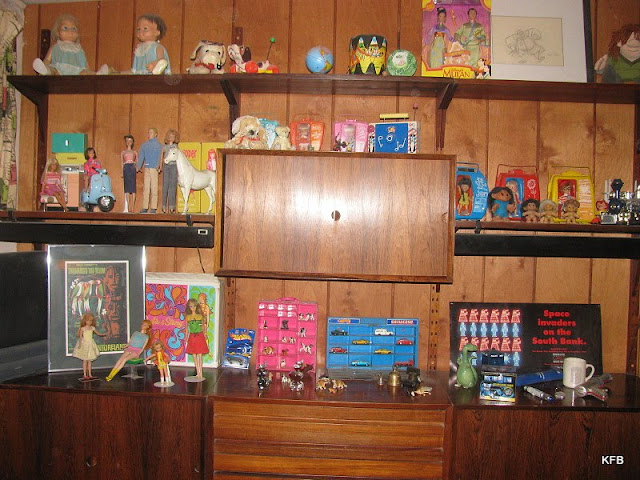 Casa Blocher is nothing if not a house full of collections: dolls, toys, scripts, video, games, tikis, midcentury modern decor, Disney stuff and so on. Some of it is fairly straightforward.... 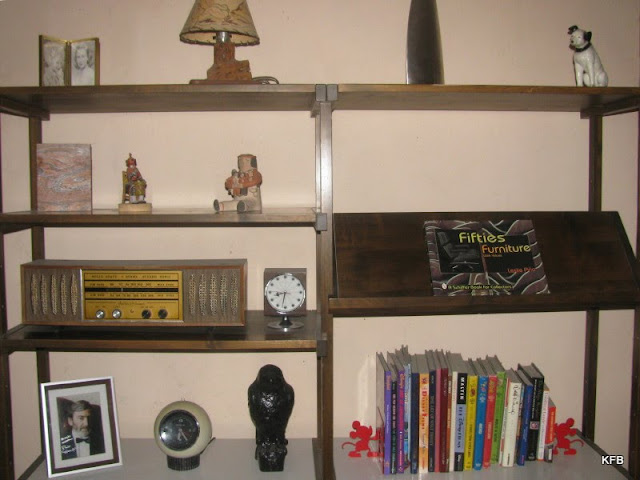 ...while other things are a bit more unusual. This vintage shelving unit has a number of items from the 1950s and 1960s on it, plus some Southwestern Indian art items. These aren't so unusual in this part of the country, but I don't suppose too many of you have seen a pottery storyteller figure or a mudhead kachina.

Our house is more than a little messy at the moment, but we're working on it, off and on. We cleared out about 40 boxes of stuff in 2010 and donated it, and are in the process of sorting through a bunch of stuff that got caught outside in the rain a few months ago. (Long story.) John's been working 7-day weeks and I'm working two jobs right now in addition to dealing with various arrangements for my friend Jan. Ah, Jan. That's the other part of what I want to show you.

For fifteen years, Jan lived with her friend Patti in a house of the south side of Tucson. That changed in 2010 and 2011, with Jan home only briefly in between hospital visits and long stints in a nursing facility called Devon Gables. Meanwhile, Patti was diagnosed with dementia, declared incompetent, and sent to another facility. The house has been standing empty. Well, not exactly empty. There were two cats still in there, being fed by a neighbor, plus most of Patti's earthly possessions, plus Jan's, overflowing into a large, very full shed in the back yard. With Jan in the hospital, suffering from a serious lung infection, liver failure, breast cancer and who knows what else, it very recently became clear that Jan was never going to be able to be discharged from Devon Gables, gather up her stuff and move into an apartment. So on Tuesday, a bunch of us from church went out to the house and retrieved Jan's things, with the help of two movers and a rented truck. Unfortunately, I forgot to bring my camera along. Here's where Jan's lifetime of possessions ended up: 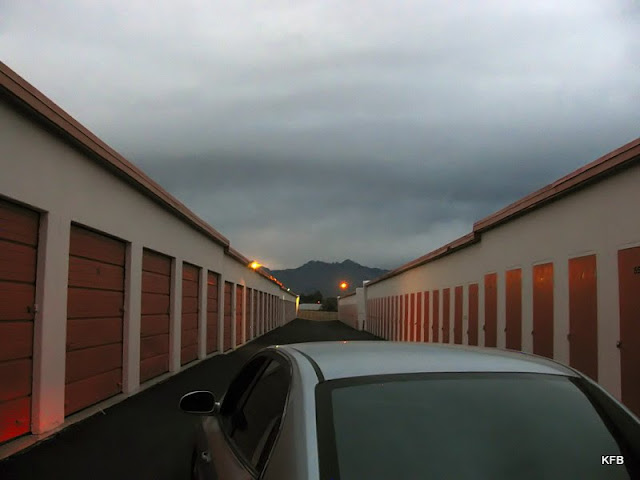 I've already lost the keys to the padlock, or I would open the door and give you a peek inside.
That's a 10' x 20' space, and it's very full. It's stuffed with Jan's furniture, books, papers, sheet music, lots and lots of knitting and crafts, a dulcimer and who knows what else. 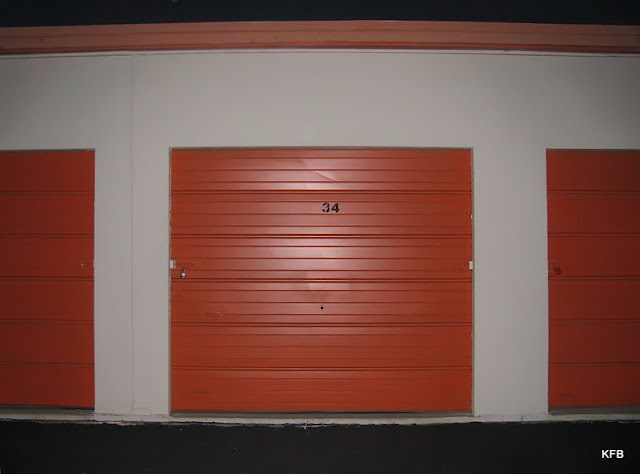 But a storage space is not a home. It merely contains things that used to mean home. 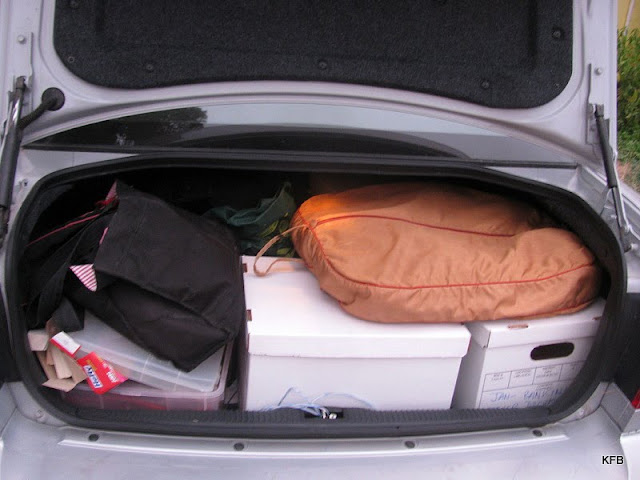 Yet more of her things are stuffed in the trunk of my car right now, having been accidentally left behind when the movers and I (driving the U-Haul) drove away. Ila rescued these things and here they are, waiting for me to either find the storage space key or have the lock cut off.

Jan was moved to a hospice yesterday, and her parents have cleared Jan's day-to-day possessions out of Devon Gables. Jan's walker in in my office at church now, just in case, by some miracle, she's ever well enough to use it again. Jan never considered Devon Gables home; she pretty much hated the place, but for the past year and a half it's the closest thing she's had to a home. The hospital is certainly not a home, nor the hospice. It sounds mawkish or maudlin or something, but those of us who love Jan now wonder if she will soon be heading to her true home, the one you get to when you die.

Now let's see the other Robins' Home pictures, preferably more cheerful than mine!

Links to this post
Email ThisBlogThis!Share to TwitterShare to FacebookShare to Pinterest
Labels: Home, Museum of the Weird, Personal, Round Robin Photo

Sorry I haven't been online much lately. This is the time of year when I do a little consulting work at a second church, plus I've been dealing with a close friend's major health crisis. Jan is in Tucson Medical Center with a serious lung infection and kidney failure, and has nearly died three times that I know about. I was the hospital's only contact person until this past Friday night, when I managed to get the names of Jan's parents in New Mexico and pass the info on to the nurses. Jan is seriously confused when she is conscious at all, absolutely miserable and restrained for her own protection. This is someone I was taking to church, out Christmas shopping and to restaurants just a month ago!
While all this has been going on, the Pima County Fiduciary Office has been badgering us to get Jan's belongings out of the home she lived in for 15 years, so they can sell the house. It belonged to Jan's housemate, who has been declared incompetent with dementia. Sale of the house will help to pay for the housemate's care. So yesterday, I rounded up some volunteers, rented a U-Haul truck and went out to the house to clear out Jan's bedroom and storage shed, and move it all into a $150 a month storage space which I'm hoping the family will ultimately pay for. It took eight hours and the hiring of professional movers to help, but we got it done, except for one important detail.... 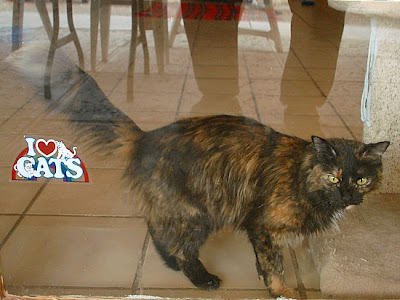 Sweet Pea has similar coloring to this cat, but shorter hair.
I wish I’d gotten a photo of at least Sweet Pea, but I’ll try to rectify that later. You see, Jan had two cats left behind in the house, being fed by a neighbor against the day Jan could move out of the nursing facility into an apartment. That's not going to happen now. Even if she does survive this crisis, Jan won't be able to live on her own, let alone care for two cats. We need to find a home for both cats, or two homes for one cat each.
Here are the details, as written up by another friend of Jan’s:

Sweet Pea is a youngish tortie cat, black and amber/orange, with a distinctive black splash down her nose.  She lives up to her name.  She needs an immediate new home.

Flash (temporary name I gave yesterday), her gold offspring, also needs placement but hasn’t had much chance to socialize with humans, and hides when approached.

The situation:  Sweet Pea’s owner has multiple medical problems and has not lived at home for well over a year.  She hoped to find a new location, but her condition is worsening.  Her house-mate, the home’s owner, was caring for the cats until she was institutionalized several months ago with dementia.  Neighbors have been feeding the cats and changing the litter box.  The fiduciary is planning to sell the house.

Friends of the cats’ owner closed out the house as best we could yesterday (a protracted ordeal), and I brought Sweet Pea to my house.  Flash is still hiding in the only house he/she has ever known.

The present:  As of last night, Sweet Pea is living in my screened nook, safe but a bit chilly.  She is bewildered but likes the food and being petted.  Luci, the most temperamental of my three (already one over my limit) is scandalized, a state which she shows vigorously.

If I can’t find a placement or at least temporary fostering, Sweet Pea will probably go to The Hermitage late today or tomorrow.  Ditto for Flash, when he can be lured into a cat carrier.

I am hoping we can avoid shelter placement at least for Sweet Pea.  Let me know if you can help or have ideas.

What I can guess about the cats, and a promise:  Probable ages are 2 to 3 years for Sweet Pea, and 1 year for Flash.  Immunizations are probably overdue.  I don’t know if Sweet Pea has now been spayed, and for certain Flash (of whichever gender, but probably male) will need to be neutered.  The promise:  If someone can foster one or both cats, I will ask our good friends at Spay and Neuter Solutions to refer for neutering, and I will make a donation to them at least equal to their costs.  I am willing to negotiate re the additional vaccinations.  Sweet Pea seems to respond well to other cats.

Help!  I really can’t take on another cat, especially since I have to have a house-sitter all summer, when I am in Guatemala.

***
As of tonight, “Flash” is still out at the house, being fed and watered by a neighbor. I’m trying to arrange for someone to go out and retrieve her (I’m horribly allergic, and still have multiple rashes a day after being in that house), but that’s not the biggest problem. What we really need is someone to take in one or both of the cats. Is that someone you? If so please message me (mavarin on Tumblr and AIM, mavarin2 on gmail). Thanks!