Round Robin: My Favorite Obsession

Listen, for the Round Robin Challenge: My Favorite, I really did try to come up with a different favorite subject from the one I'm going to feature here tonight. Favorite toy? Nah, already showed you. Favorite vista on Mount Lemmon? Didn't make it up there. Favorite book? Variable, and not very interesting to photograph. And so on. Nothing really did it for me, and I was running out of time.

So I'm going to show you parts of my Doctor Who collection, from my all-time favorite television show. Doctor Who. It first aired in the UK on November 23, 1963 and lasted until December 1989, was revived in 2005 and is again going strong on both sides of the Atlantic, in something like 40 countries around the world. 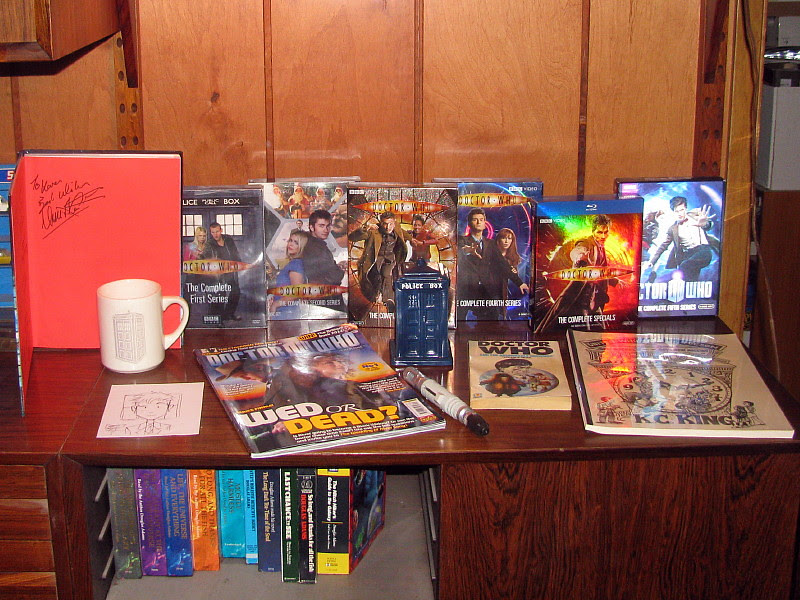 At first, I thought I wouldn't have anything interesting to show you. I don't really buy much by way of Doctor Who toys and collectibles. I own a few hundred books and nearly as many videos, but how photogenic is that? So I set up some of the box sets on a shelf, along with a few other things I do have. Clockwise from left, you can see  a heavily-autographed copy of The Doctor Who Encyclopedia, box sets of Series One through Five (2005-2010) on DVD or Blu-Ray, a fan novella called Paradox that I wrote in the early 1990s, the last Target novel I needed to complete my collection of novelizations circa 2000, a TARDIS bank (that's the blue thing, representing the faux "police box" the Doctor travels in), a sonic screwdriver, the new issue of Doctor Who Magazine, a cartoon sketch of the Tenth Doctor (David Tennant), and a disappearing TARDIS mug. 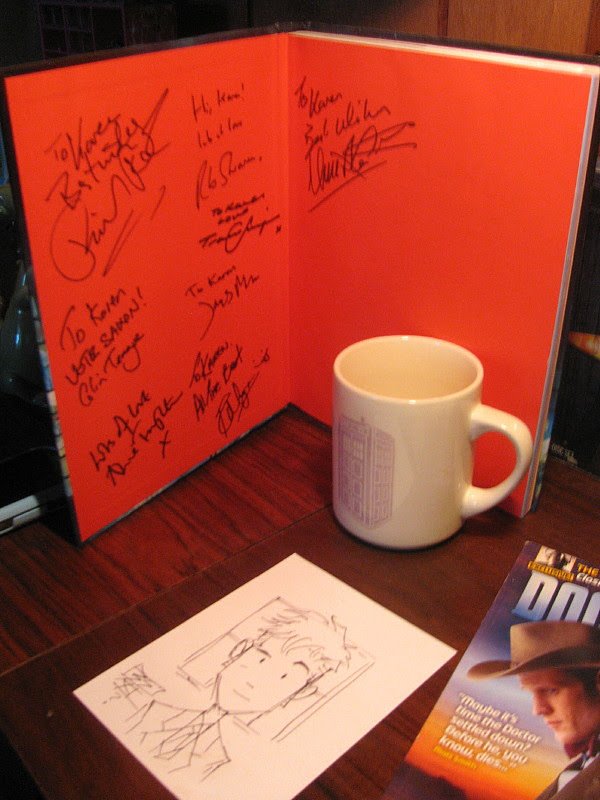 Here's a better look at the sketch and the autographed book. The latter has been to two Gallifrey One conventions in Los Angeles, and has been autographed by numerous writers, actors and behind the scenes people. The more I worked on this entry tonight, the more I remembered other things I could show you. I'll spare you the photos of the TARDIS towel, trading cards, TARDIS Time Lore fanzines and the FoDW keyring, but what about this? This original art by Ruben Calvillo is about 24" x 36", and made with either colored pencil or pastels. It cost me $100 at a local convention circa 1996. 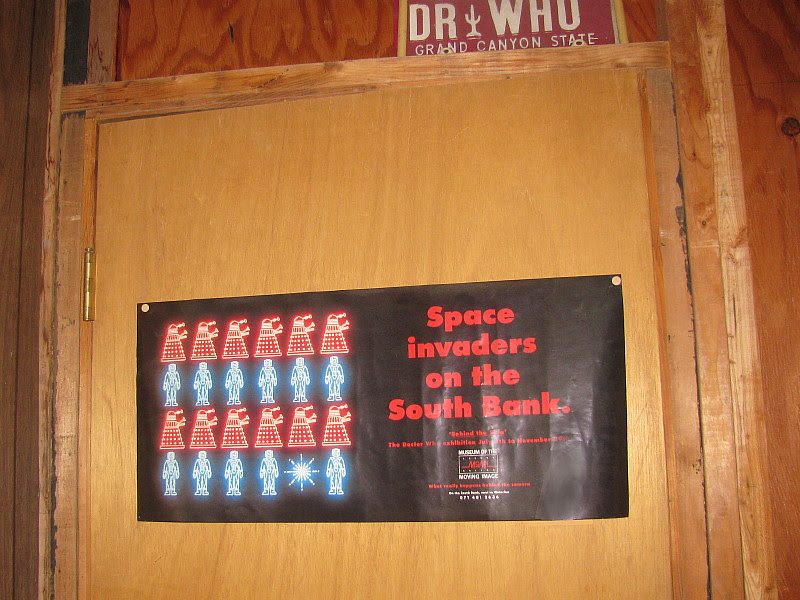 This poster was on the back of my office door here at home for about 16 years. Until tonight. It's from a 1991-1995 Doctor Who exhibit of props and costumes (etc.) at the Museum of the Moving Image in London. The exhibit was called called "Behind the Sofa," which is where British children are said to hide when Doctor Who episodes get scary. 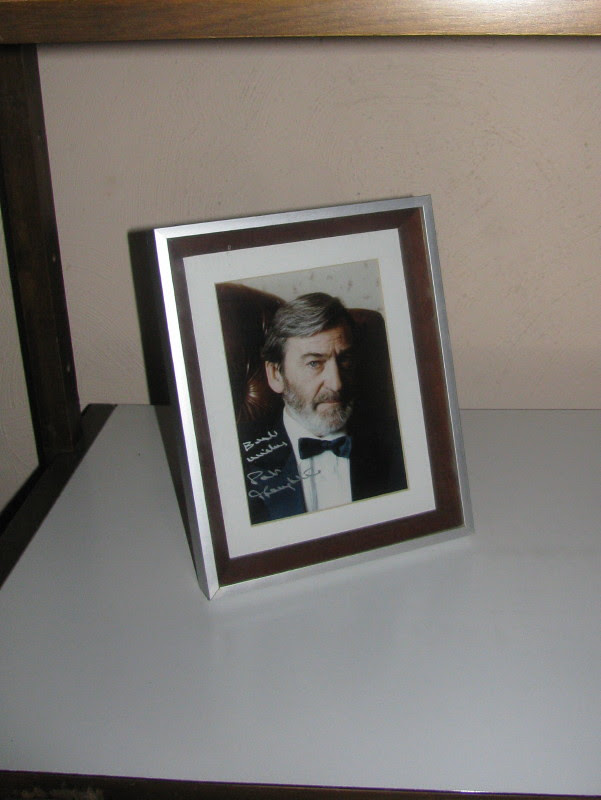 And finally, here's an autographed photo of the late Patrick Troughton, the second person to play the Doctor on television. Unfortunately, I never met him myself. I have met four of his successors, though.

You can find more photos here. And if you're interested in Doctor Who, you may want to follow my new Tumblr blog.

Now let's see what other Robins singled out as favorites!

Email ThisBlogThis!Share to TwitterShare to FacebookShare to Pinterest
Labels: Collections, Doctor Who, Museum of the Weird, Round Robin Photo

EMPS: The Mermaids of Disneyland

Carly asked to see sand sculptures or mermaids, neither of which are a natural fit for life in the desert. So I went to my archives: 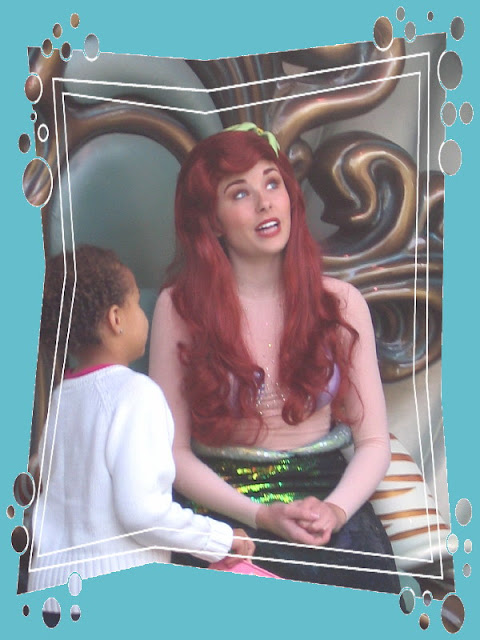 First off, here's Ariel, the Little Mermaid herself, photographed at Disneyland on Christmas Day 2005. There's a better than 50-50 chance that John took the photo, but I did the editing, including the framing. 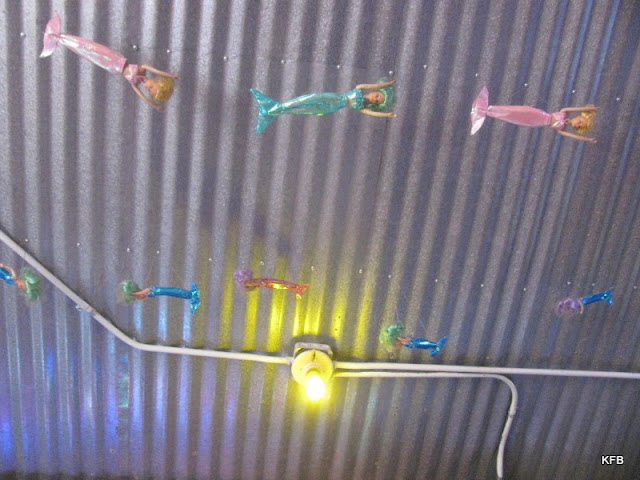 More recent, but definitely my work, is this shot of the ceiling at my local Chuy's Mesquite Broiler, taken a month ago. 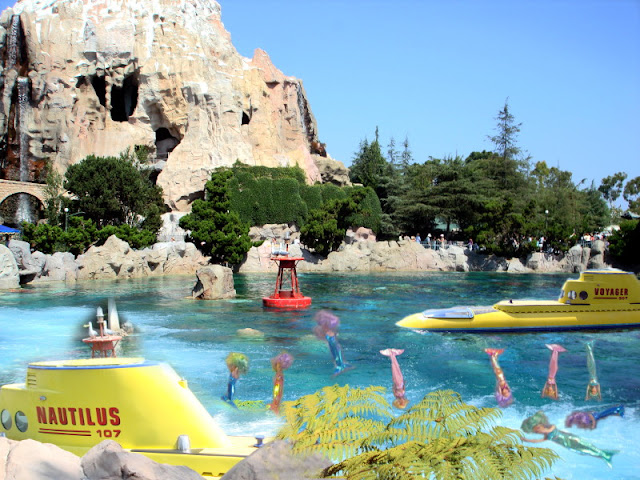 Finally, here's a playful composite I made from about five different photos. The scene is the submarine lagoon at Disneyland, now home to the Finding Nemo attraction. There are mermaids on the ride itself, but I got no photos of those. These are, or course, the mermaid Barbie dolls from the ceiling of Chuy's! The two subs are both from other photos taken the same day as the lagoon itself.

Incidentally, back when the original Submarine Voyage attraction first opened, there were live "mermaids" in that lagoon!

Carly also asks whether I'd rather have sand of grass between my toes. Neither would be best, but failing that I'll go for some nice, clean, dry sand. I'm allergic to grass!

EMPS: In Living Black and White

For the Ellipsis Monday Photo Shoot: Black and White Photography isn't exactly what I posted Friday night, but it's a similar concept! Here are some fresh shots: 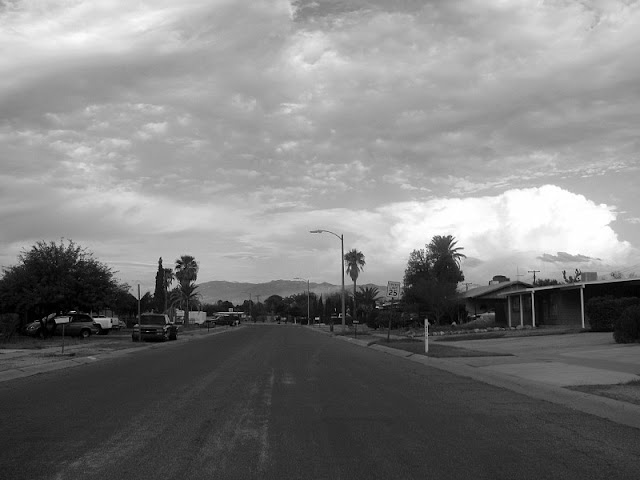 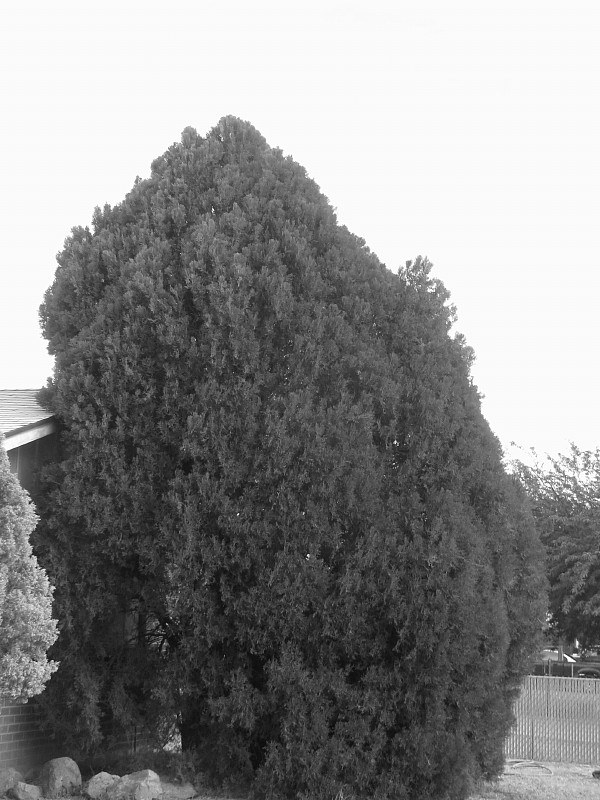 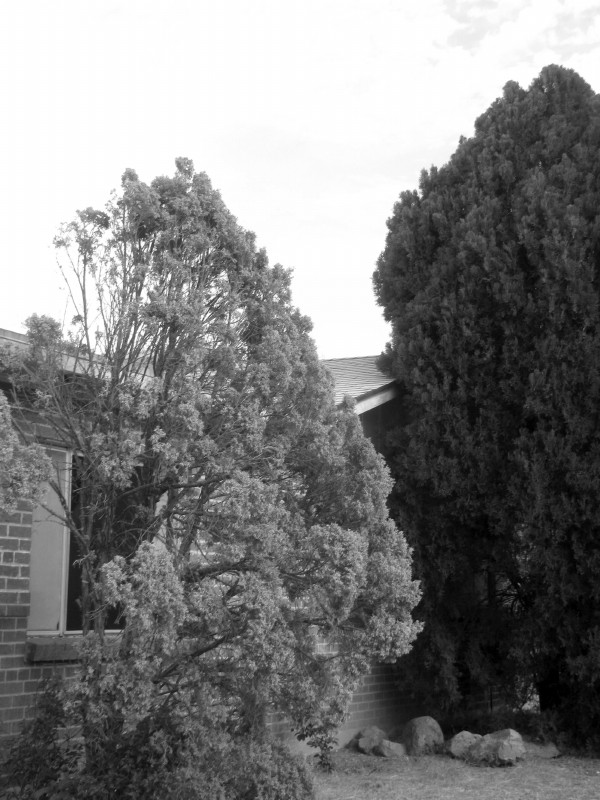 And, in my best attempt at Ansel Adamsness, at least for the moment, here's a black and white treatment of a shot from a month ago: 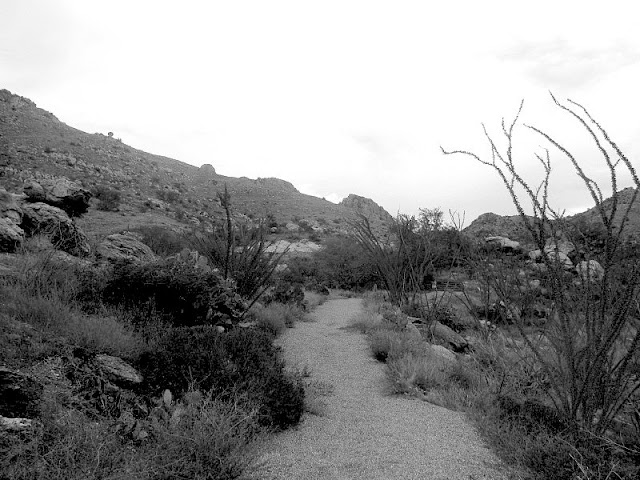 Round Robin: Did I Cause This "Shades of Grey" Day?

It's the tail end of the Arizona monsoon, Tucson's summer rainy season. I hate to complain about too little rain when elsewhere in the country houses and bridges have washed away from too much of it; but the fact is that we didn't get much rain over our house this summer. There's been a bit of thunder and the occasional ten minute storm, but not much more than that. And now we're at the time of the year for even that to end.

Nevertheless, inspired by a cloudy sky, I set this week's Round Robin Photo Challenges topic as "Shades of Grey." Frankly, after that, including this morning, the weather around here started to clear up. Then, around 5 PM, which is usually when our storms start, if at all, I heard thunder. It was as if the sky was offering to help me with the grayish shots I needed. A little later, after it actually started raining, I got the following photos: 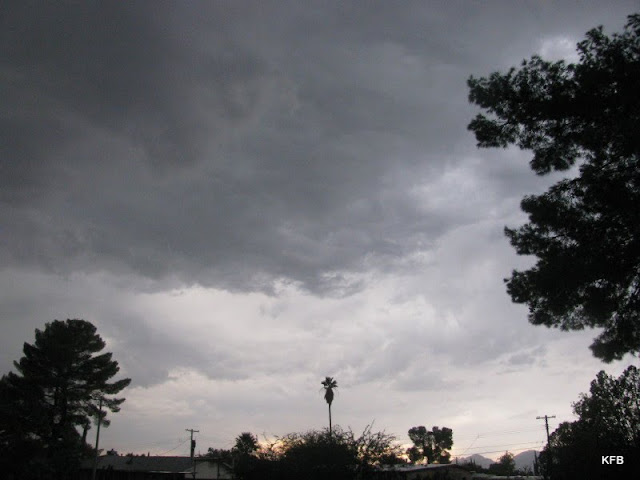 There's just a touch of sunset here, but mostly it was all just grey and dramatic. 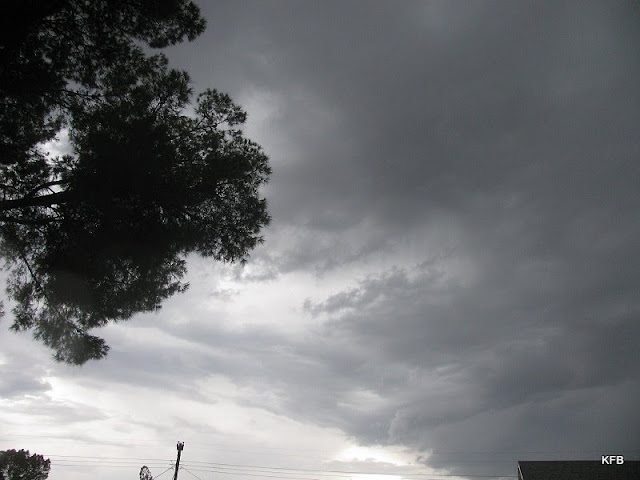 One thing I like about this photos is that it's 100% in shades of grey, even the tree and the bit of roof. Yet it's a color photo, completely unedited except to resize and sharpen. 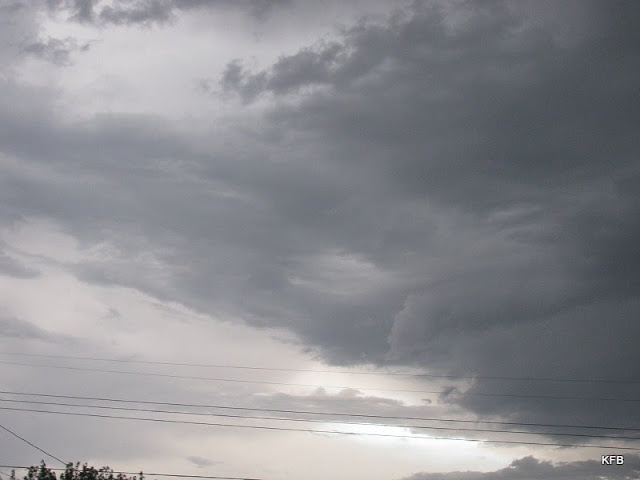 Just a bit of a skyscape, this one, again unedited except to resize and sharpen. 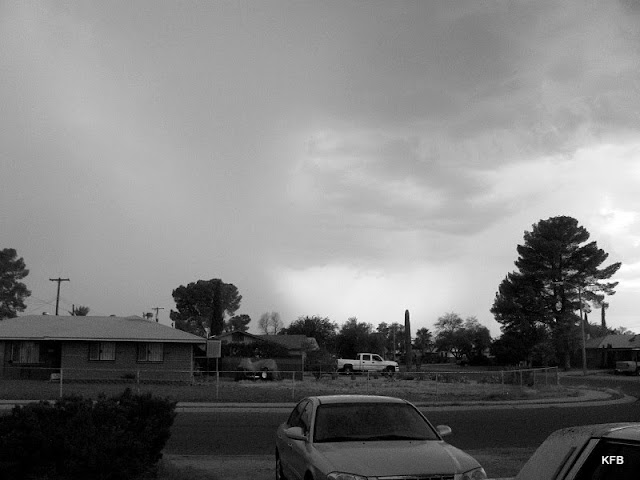 I did reduce this one to grayscale, but you're not missing much.

Now let's see what shades of gray the other Robins captured!


Linking List
as of almost 10:45 AM MST
Saturday, September 10th