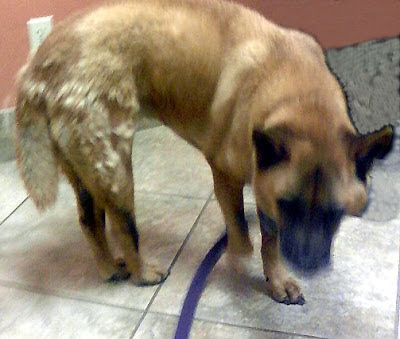 Sorry about the crummy Tuffy pictures. I didn't have my camera with me at the vet, and the phone's camera isn't really good enough for indoor shots. Also, I cloned John out of one of the shots out of respect for his privacy.

The oncologist is leaving tomorrow morning for a week's vacation, and her staff is also taking the time off. But she worked Tuffy in tonight on a 6 PM late appointment. She and the assistant we saw were both a little alarmed with the swollen neck, not so much with the gouges in her ear, which she may have done with her own claws. The ears are already healing.

The vet collected a sample from Tuffy's neck - a viscous fluid - and looked at it under a microscope. She said looked like dead epidermal cells if I understood/remember correctly. That doesn't really tell her whether it's an infection or a tumor or some of each, and of course the next is close enough to the tongue (where the cancer was) to be a concern. So she's sending the sample off to a lab, and set Tuffy home with two weeks' worth of antibiotics to go along with the prednisone and the Pepcid. She'll call us when she gets back. 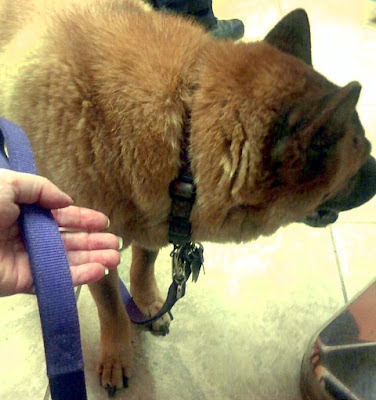 Meanwhile, there isn't much we can do but keep an eye on her. If she gets alarmingly worse, we can take her in on an emergency basis, but of course there won't be an oncologist available in case that's the problem. But Tuffy seems fine other than the ear and the swelling - the same weight as last time, reasonably active and interested and hungry.

We're also going to give her a bath and a good brushing, I think. She's suddenly got fairly severe dandruff on her rump. Poor Tuftuf!

Poor Tuffy! She looks unhappy. I hope the swelling is nothing more than some minor infection, and the antibiotics help her. I know you are very worried about her, especially with the oncologist away for the week. Her behavior sounds good, so I feel better. I hope she gets to feeling better soon. bea