Scenes from a Monsoon, 2008 Edition

Here are selected pictures from the 2008 monsoon in metro Tucson, Arizona that didn't fit into last night's entry, or other entries since the rain began circa July 3rd. I don't necessarily have a lot to say about each shot, but I'll at least identify them for you. 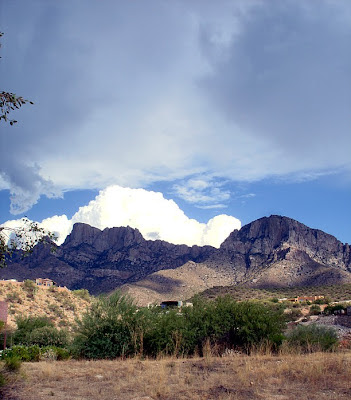 Clouds over Pusch Ridge as the rain began, July 3, 2008. Our drive home was delayed while John struggled to install new wiper blades on his Olds Alero or whatever it is. 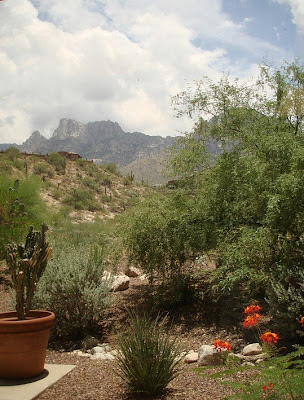 The view out the office lunchroom window at lunchtime, July 11, 2008. In case you're wondering, most of the office, including my cubicle, has no windows at all to distract people. Passing La Reserve on Oracle Road, July 11th, 7:47 AM. La Reserve is a swanky housing development in Oro Valley outside Tucson. Sorry about the reflection off the car window. 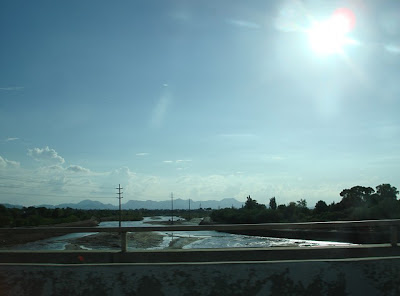 Tucson's rivers - the Santa Cruz, the Rillito, Canada Del Oro Wash and the Pantano Wash, plus lots of smaller arroyos - are mostly dry, most of the time. On Wednesday the 9th, the Rillito River near River Road was a broad trail of reddish brown dirt. On Thursday afternoon, a little creek ran through it. By Friday afternoon, the crossing at Craycroft south of Sunrise looked like this. If we get enough rainy days in a row, the islands of dirt on the middle will temporarily disappear. In 2006, the Rillito flooded its banks in a few places. 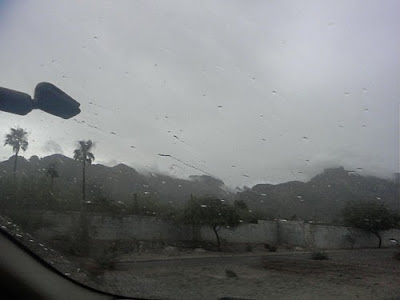 The camera phone really doesn't handle monsoon pictures well, but I like this ghostly photo of the Catalinas through clouds and rain on July 1oth.