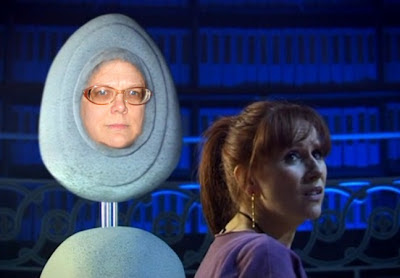 Julie - I am definitely not in a jail cell in Russia. And visual evidence notwithstanding, I am not currently stored on The Library's hard drive, nor living in a different timeline from the one of my birth (aside from branching, presumably). And I am definitely not a butterfly dreaming that I am a woman.

Unfortunately, I have no equally interesting statements to make about what and who I actually am. I'm just Karen, and I suppose that's enough.

I finished editing Chapter Five of Heirs tonight. 40% through the book, I'm only down two pages overall. But a lot of stuff is worded much better than it was before, and tonight I moved a scene from Chapter Five to Chapter Four, which solved at least two narrative glitches.

And I just finished my personal marathon of watching "The Donna Noble Story," fourteen episodes of Doctor Who plus a couple of scenes from one more. Tomorrow I hope to start watching the series from its 1963 beginning, in order, as much as is possible given that some episodes of some stories were scrapped by the BBC in the 1970s and not all have been recovered or reconstructed. Should be interesting, watching 10+ actors play the same character over a 40-year period. With any luck, that will keep me busy until the next Doctor Who special this Christmas.

And now, I'm going to try to go to sleep. Wish me luck!

Email ThisBlogThis!Share to TwitterShare to FacebookShare to Pinterest
Labels: Doctor Who, Reality, Sleep