I got much more sleep last night than the night before, and I'm keen to repeat last night's triumph, although I'm already half an hour too late. So I won't linger lovingly over tonight's entry. You know how it goes: some nights you get a three hour extravaganza from me, a nice long rant-cum-essay illustrated with pretty and/or clever photos, which may or may not inspire a comment or two; and some nights I post whatever photos are handy, string together a few paragraphs and call it bedtime. Guess which kind you're getting tonight! 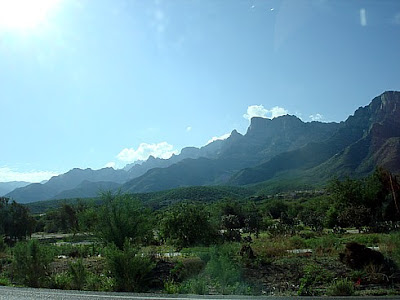 But I did get a few semi-cool photos today, and several less-cool ones. First up: a subtle layering of folded mountains in the morning sun. I shot this through a closed window, which resulted in a few distracting reflections. I darkened and cloned them out as best I could. Can you tell where they were? (I can see it on my laptop, not so much on the computer at work, which I checked on my lunch break.) 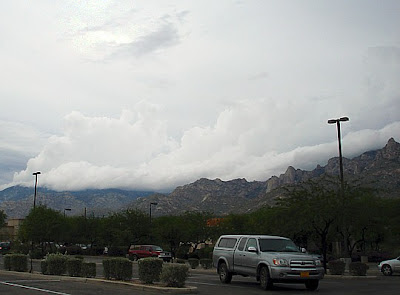 At the end of the workday, the same mountains were blanketed by monsoon clouds. It's not just the sky that changes; the look of the mountains changes with the variation in light, even discounting the parts that are hidden behind water vapor. 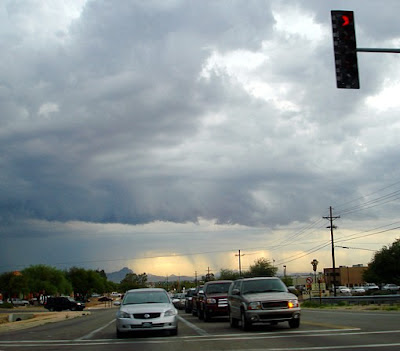 It wasn't time for sunset on the ride home, but the future site thereof had its own special lighting. 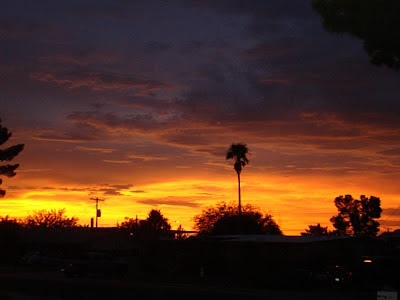 An hour or so later, I happened to walk past the front door and saw the orange of the late stages of tonight's sunset. Of course I grabbed the camera. This shot is resized and sharpened lightly. Period. 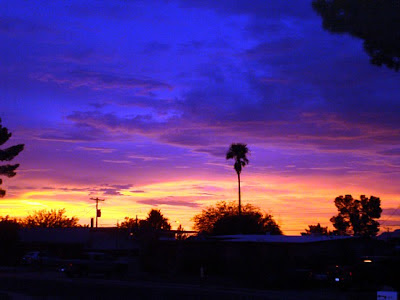 Just for fun, I also gave it the "autoenhance" treatment. Funny what PhotoStudio will choose as the "corrected" colors. 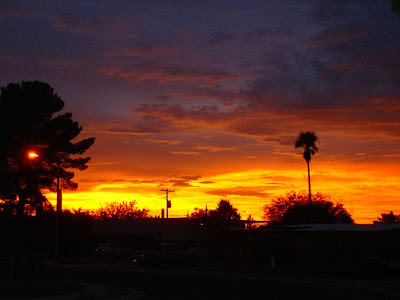 And this shot I only saturated about 22%. It's not all that far off what my eyes saw. Well, on the laptop, anyway. It looks a bit extreme on a desktop computer.

Tonight I mostly read Doctor Who Magazine. No apologies from me: I enjoyed it. I also worked on Chapter Eight of Heirs for a bit, and chatted with Sarah about Space Mountain (which she wouldn't miss) and Tower of Terror (which I may or may not go on again, to challenge myself and support Sarah if she tries it). Tomorrow night, I plan to start packing, so there's no last minute panic trying to post the Round Robin entry while searching for my Disney pins and Disneyland hat, and that shirt that quotes Walt Disney as saying, "It's kind of fun to do the impossible."

If I can just accomplish that last bit of advice, I'll call it a life well-lived - even if some blog entries are better than others.