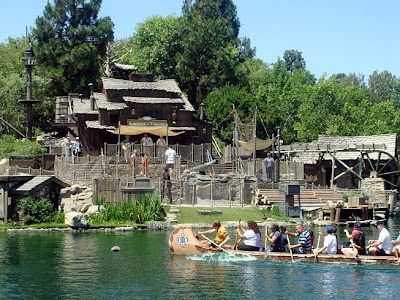 My only edited "camera" photo from Saturday night

My blog entry for last night was never going to be long, because, well, when you'd been on the go for 21 hours on 3 1/2 hours of sleep and just promised two close friends that you'll be up and ready to go seven hours from now, it's not a good idea to spend the next three hours blogging. There was one photo I edited for you out of the 200+ I took on Saturday, not counting the 70 I took using the phone after the camera battery went low. I couldn't transfer those to my computer because I neglected to bring the memory card adapter. 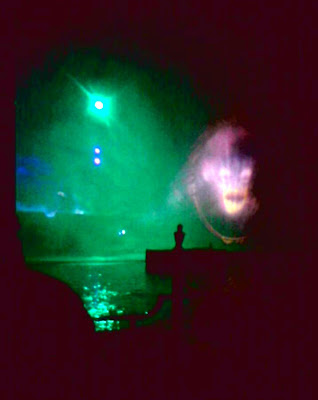 The most interesting of the phone's Fantasmic shots

As it turned out, I could blog last night at all. The hotel's wireless network was offline part of the time, and when it did turn up asking for a login and password I've neglected to arrange for when checking in at nearly 1 AM, Norton was convinced it was some kind of malware site. I've jumped over worse hurdles to blog from the road, but last night, it simply wasn't worth it.

So, what was I planning to say about my Saturday at Disneyland with Sara and Sarah?

I was going to call it "transcendent."

Really, I was. I was extremely happy to be one of my very favorite places, with two close friends who had the same interests in what to see and do next. I was happy that we got along as well in person as online. I was happy that a random stranger gave us three Splash Mountain FastPasses, unasked, at exactly the right moment. I was happy that we got in nearly all of our must-sees the first day, even the Finding Nemo update of the Submarine Voyage. I was happy with the great 80s cover band Stellar, which had replaced the Radio Disney crap at Tomorrowland by the time we were in line for Nemo, and played for us as we waited. I was happy that Sarah's parents were interesting and personable and cool, and that they got us a great spot from which to watch the 10:30 PM show of Fantasmic! I was so happy at seeing Fantasmic, properly, for quite possibly the first time ever, that I spent much of it in tears. (What a softie!)

So what did my transcendent day transcend? That's easy to answer: fatigue and pain. I really should have replaced those worn out shoes long before walking around in them for 21 hours on Saturday, through airports and hotels and Disneyland and the streets of Anaheim. By the time I went to bed I was thoroughly sore from the knees down, and feeling every minute of my 51+ years. I was even more sore today.

So, how was your Saturday?

Very much like yours, oddly enough! We did probably overdo it a bit on Saturday, but it was fun!