Round Robin: Those Who Are Gone - Sort Of

When I posted the topic for this week's Round Robin Challenge: Gone, I wasn't thinking of the prehistoric culture known as the Hohokam. I was thinking more along the lines of 1950s architecture and signage for Tucson businesses that aren't there any more. Something like this:


(Click once on any photo to see a bigger version.) 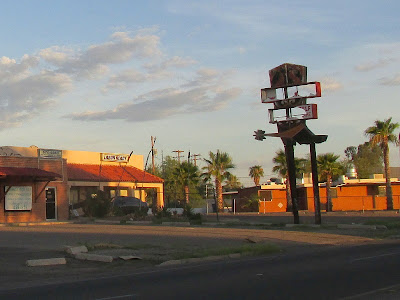 But last weekend, in my continuing quest to find fun things to do with my Dad, I decided to drive him to the Casa Grande Ruins National Monument, about an hour northwest of Tucson, not quite on the way to Phoenix. I hadn't been there since 1986, when John and I first came to Arizona. (Well, actually, John lived in Arizona as a kid. But I'd never been here before.) One of the many memorable places I saw in the very memorable year was the adobe remains of a large abandoned Hohokam settlement, named in Spanish for the "Big House" - Casa Grande - that still stands above the half-buried walls of the rest of the ancient city. 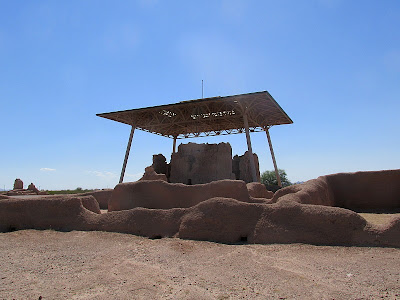 These are truly the remnants of something important that is gone - long gone.

The people who built Casa Grande are a bit of a mystery. We call them the Hohokam, which more or less means "all used up" in the O'odham language. Nowadays the preferred term for the Hohokam and other ancient peoples of the area, the Anasazi and the Mogollon, is ancient Sonoran Desert people. We don't know what the Hohokam called themselves. Their civilization lasted over 1400 years, with irrigation of the desert, crafts and trading - but without the wheel or the written word. They are thought to be the ancestors of the Tohono O'odham nation of Southern Arizona and several other tribes - and evidence of their own ancestors goes back thousands of years before Christ. Rather romantically, they used to be known as 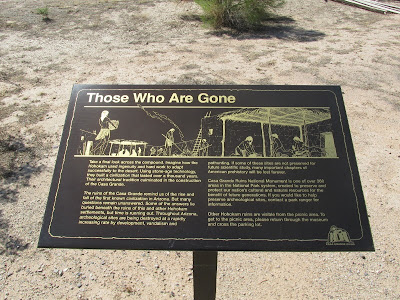 "Those Who Are Gone." But obviously, with their descendants living around Tucson, the Gila River of Central Arizona and elsewhere, they aren't truly "gone." They've just moved! And wouldn't you, in a persistent drought so bad that even your clever irrigation couldn't sustain the crops anymore? 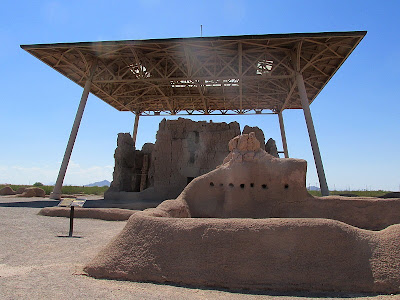 Now, hundreds of years of abandonment in the desert tend to be fatal to the integrity of adobe walls. You've seen my pictures of the Ft. Lowell ruins, and they're less than 150 years old! 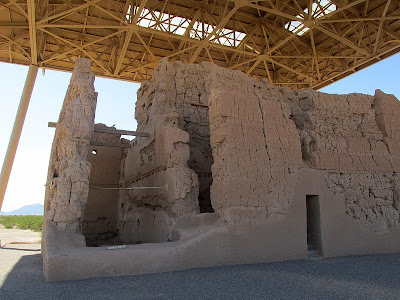 Add to that the tourists who stopped by for a few hundred years after Padre Eusebio Kino discovered the Casa Grande ruins in 1694, and, as often as not, carved their names in its walls. 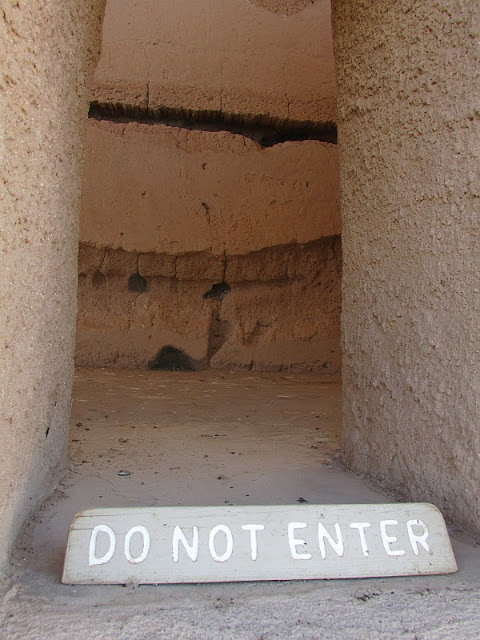 Clearly, something needed to be done, and something was done. In 1890, the U.S. Government began to shore up and repair the ancient Big House, and  and "in 1892, President Benjamin Harrison set aside one square mile of Arizona Territory surrounding the Casa Grande Ruins as the first prehistoric and cultural reserve established in the United States," according to the National Monument's web site. 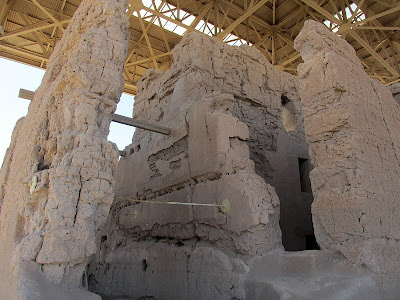 In 1932, that modern-looking steel roof was constructed over the ancient house, ruining the aesthetic but helping to preserve what was underneath it. According to Wikipedia, there's a pair of owls living in the roof now. 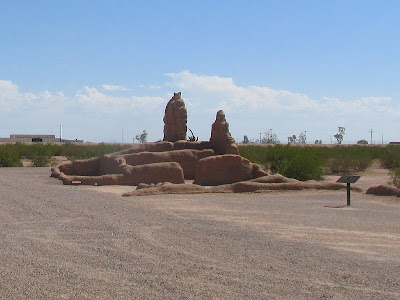 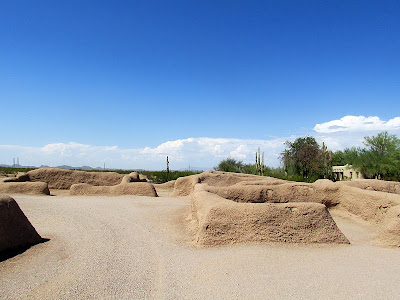 The ruins extend far beyond the Big House itself, though. In a wide area around it are foundations of other buildings - entire compounds, including ball courts! Some of these are still visible. Others have corn planted over them. They're not gone - just buried.

Now let's see what else is gone!

And it's not too late to show us what's gone from where YOU are!

Round Robin: Listen to This Picture

For this week's Round Robin Photo Challenge: Listen to This!, I asked to see pictures of persons, places or things that have a memorable and distinctive sound. I didn't manage to get anything spectacular along these lines, but let's see what I did come up with! 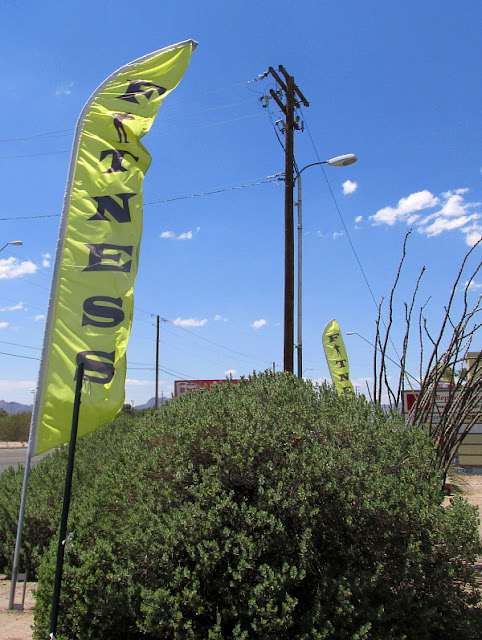 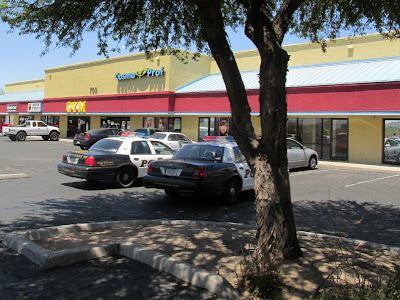 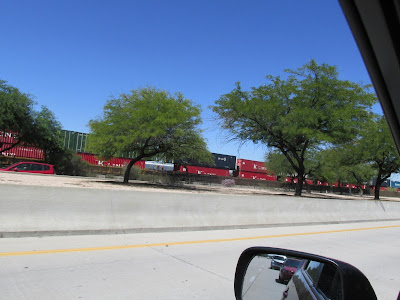 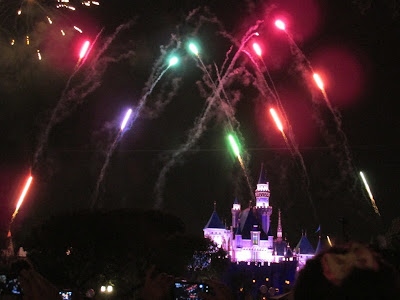 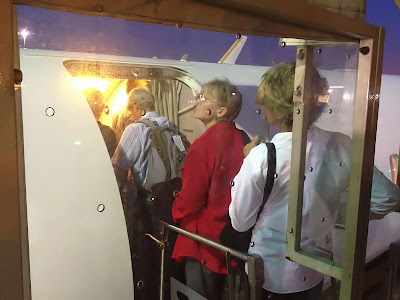 Not a big list of participants this week - unless you care to join us!