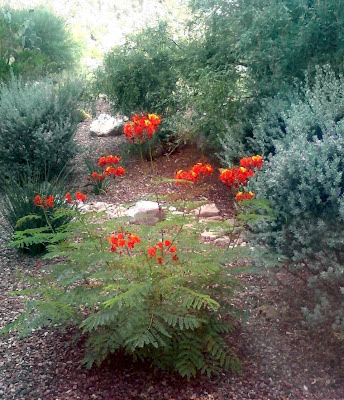 As you probably know if you read this blog with any frequency, I'm not a big fan of flowers. Flowers completely fail to give me any kind of emotional stimulus, except perhaps a vague guilt that I should be admiring them and making a fuss about how pretty they are, when in fact I haven't the slightest interest in doing so. I'm not quite sure why this is. I tend to theorize that because I'm allergic to any flower you can smell, I have developed an antipathy toward all flowers as a defense mechanism. But I'm not allergic to all flowers, and there are other pretty things that leave me cold in exactly the same way.

Butterflies are the main example I'm thinking of here. Cats too, but that's a separate issue. Tonight I'm talking about butterflies.

My friends Carly and Steven both take really extraordinary photos of butterflies on a regular basis. (Steven does an amazing job with a whole variety of tiny critters, while Carly is more of a butterfly specialist in that aspect of her photography.) I appreciate the artistry of their photos, the composition, the colors, the amazing, sharp detail seen in these digital images of tiny creatures. Carly has written about the fragility and delicacy of butterflies, the damage they sustain so easily, and the amazing migratory flights some of them make during their brief lives. I want to care about these pretty gadabouts, but somehow I just don't.

I was thinking about this as I finished eating lunch at work today. A yellow butterfly was flitting in and out of sight on the other side of the picture window in the lunchroom, and I wondered whether I could get a decent picture of it. The camera was at my cubicle, but my phone was right there with me. So I snapped four shots with the Rumor, after which the butterfly flew away. I then went and got my real camera, but the butterfly did not return.

It's not that I cared about the butterfly. I just wondered whether it was possible to get a decent shot of one through that picture window.

The answer is, not with the camera phone. Not as such, anyway. Here is the unedited version of the best of the four photos, the only one in which it is even possible to tell the yellow butterfly from the yellow blooms: 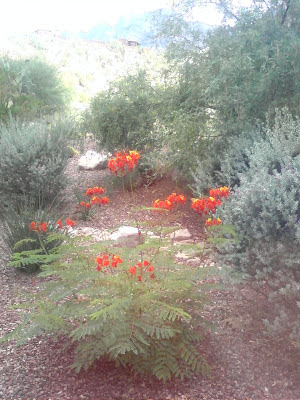 From a technical viewpoint or a butterfly fan's viewpoint, it's a terrible photo. But I like the impressionist look that comes from the muted colors and low resolution.

If I autoenhance and crop, you can just about see the butterfly: 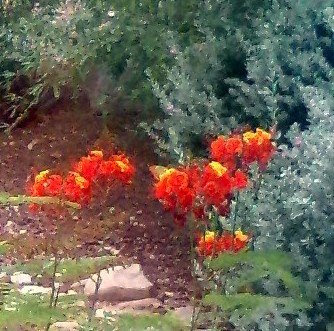 Impressionist butterfly. Do you see it?
It's right in the middle there, yellow with orange at the tip, almost perfectly camouflaged among these particular flowers. And although it's still a terrible butterfly photo, I kind of like it as a landscape, even though it has flowers in it. Go figure.

When I got into the car after work, I told John about my failure to appreciate butterflies.

"That's because no butterfly has ever done anything nice for you."

"It's because they're not mammals," was John's next guess. That was closer to the truth. I'm really not fond of insects in general, but I used to pore lovingly over picture books featuring mammals.

"Right. There are birds I have liked."

"I've liked fish, too." I used to have a few favorite tropical fish, the ones that had some semblance of a personality.

"Fish I have liked, by Karen Funk Blocher," John said. Or words to that effect.

Yeah, well. They're not as good as mammals, are they?