You know I'm a sucker for Halloween. Every year I decorate the little alcove in front of our house, come up with a costume (sometimes new, sometimes a rerun), put together treat bags full of candy and toys, and sit out there for three hours or longer, waiting for kids (and sometimes adults) to come along. Some years we've had as many as a hundred or so.

We had old comics this year, in addition to the candy and toys, cast-offs from John's collection of cheap reading copies of relatively worthless titles. I had a graveyard theme going this year, and I was a Ghost Bride. My not-terribly-successful makeup was the end result of buying Halloween makeup from three different stores. I bought a $9 shirt today to go with the skirt that's now too big for me. I was up until 3:30 AM last night, bagging candy and putting up the decor inside and outside the alcove.

And 14 people collected their comics and toys and candy, while the Assembly of God church across the street blared out raffle numbers at its competing "Fall Festival." 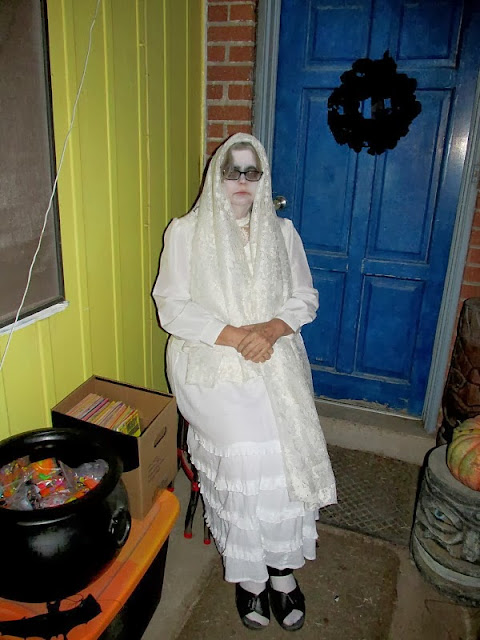 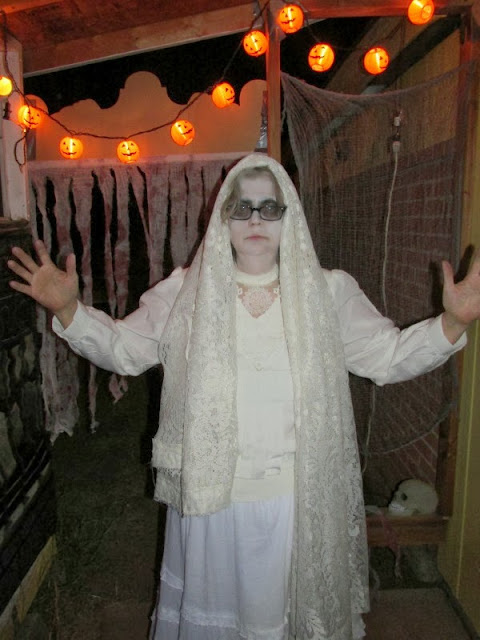 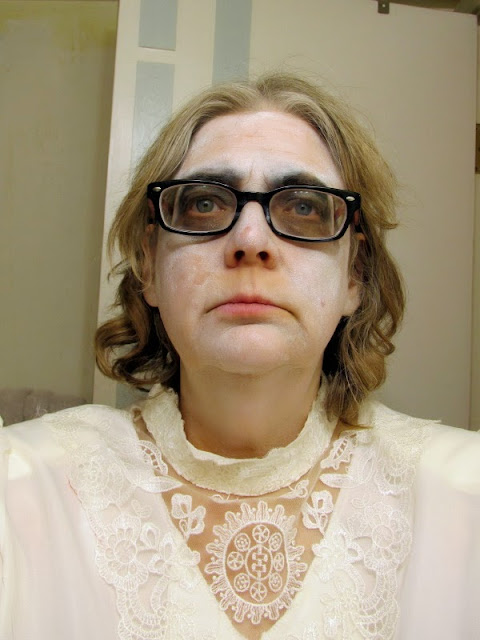 End of the night. The makeup was much the worse for wear,
especially after eating dinner perched on a stool outside.

For Round Robin Challenge: Spooky Effects, I asked for photos that show "something scary, odd or ethereal," using any sort of special effects - special staging, lighting, photo editing or anything else to achieve the spooky. I figured that we'd be less than two weeks out from Halloween by now, and we'd have both the interest and photographic opportunities for this!

Two weeks ago, I took my Dad to Old Tucson Studios, in Avra Valley on the other side of Gates Pass from the city of Tucson itself. Built in 1938 for the movie Arizona starring William Holden and Jean Arthur, it's sort of a combination of shooting location and theme park. Stars from John Wayne to Steve Martin have films movies there. The High Chaparral was principally filmed at Old Tucson, along with lots of other tv episode and even bank commercials. I've visited Old Tucson at least half a dozen times since we got here in 1986, but not often in recent years since an arson fire gutted a large chunk of it. But they've managed to rebuild and keep the place going, and I'm very glad of that!

For the past 23 years, Old Tucson has had a second life after dark at this time of year. Nightfall is promoted as "one real haunted town!" I've never yet made it down there for Nightfall, but even in the daytime there were traces of the spooky effects to come: 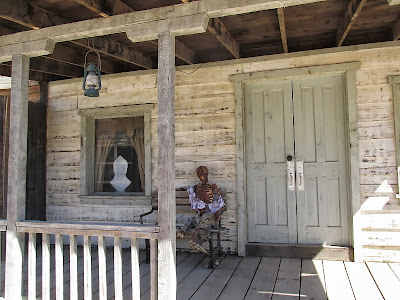 The best in the window is one of those "eyes that follow you" FX, like the busts at the Haunted Mansion at Disneyland. The skeleton is, well, a skeleton. But having witnessed a shootout at the end of Old Tucson's daytime programming, I couldn't help making a connection between the seated skeleton and the loser of the gunfight, gallantly helped onto a chair. A little photo editing, and presto! 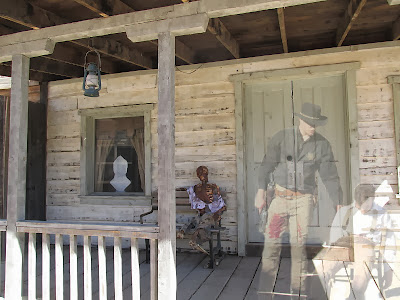 Speaking of Disneyland, though, I actually have more spooky material to work with from my Disneyland trip back in May than from the October Old Tucson visit. After all, the Haunted Mansion is one of my very favorite attractions! 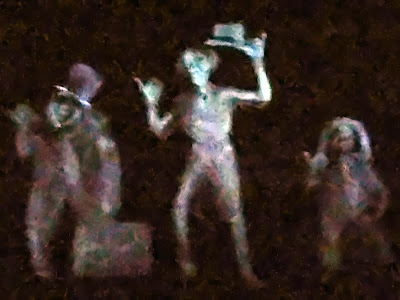 The famous "Hitchhiking Ghosts" are very hard to photograph, but I managed to boost the image a bit for an interesting effect!

At Old Tucson there was a stage show in the Grand Saloon, with a middle-aged chanteuse wrangling three singing and dancing ingenues. There's the chanteuse, but who is that behind her? 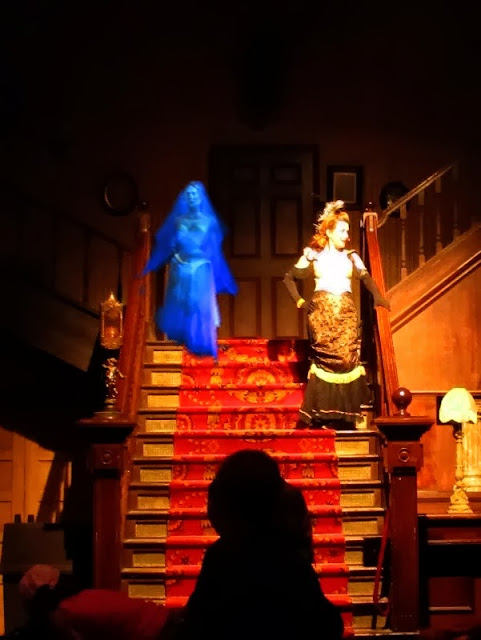 Why, it's the Bride from the Haunted Mansion! 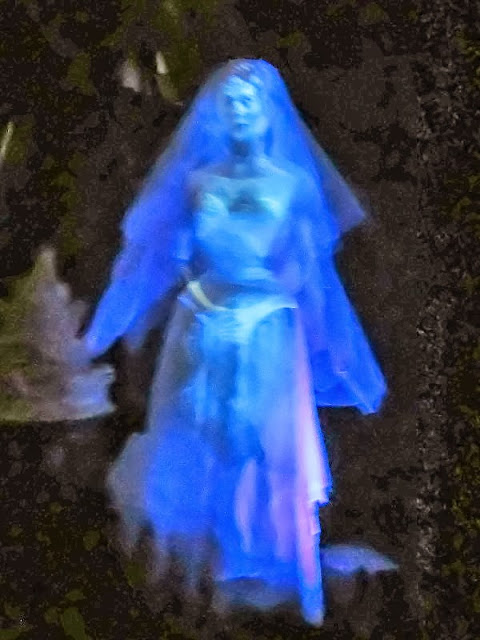 Aww, what the heck. One more. Below is the old courthouse in Tombstone, Arizona, the site of more than one hanging. If any place ought to be haunted, this seems like a good candidate. Or maybe the camera was picking up flares from the sun overhead. Yeah, that's it. 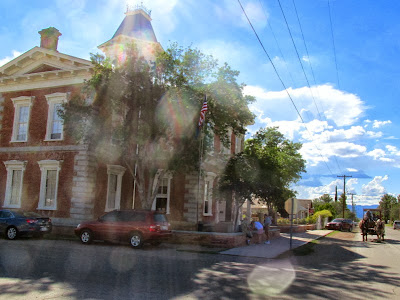 Or maybe there are ghosts there after all! 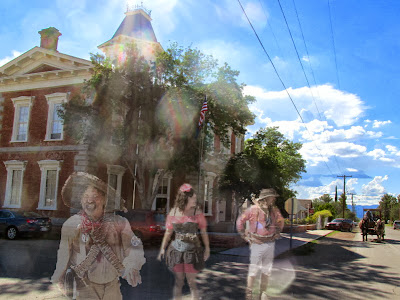 Round Robin Challenge: The Pumpkin Hunter

For the Round Robin Photo Challenge: Fun Foods, I was thinking about showing you the fun I've had recently taking my dad to restaurants that serve something a bit out of the ordinary. I may still do that - but first, I want to return to the subject of my annual obsession. For me, the months around October are all about the pumpkin. It's my absolute Achilles' heel this time of year. I'm working to lose weight, but then I see it: the sign at the register or the sign on the table: 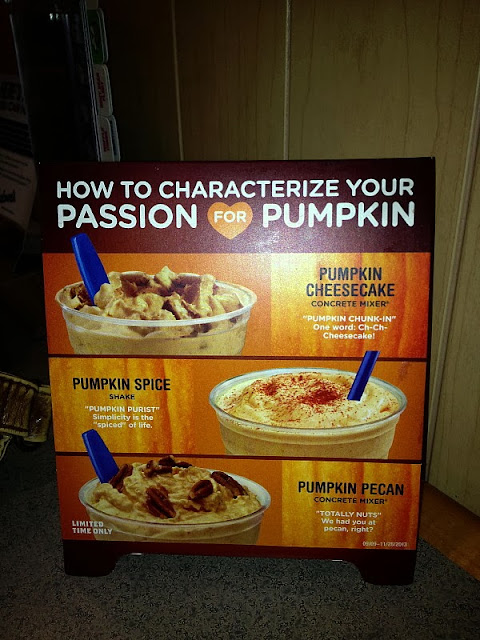 Maybe the sign is for pumpkin cookies, pumpkin ice cream, or pumpkin smoothies. It hardly matters. It could be Pumpkin Anything, almost. I almost certainly want it. This is why it's only almost: 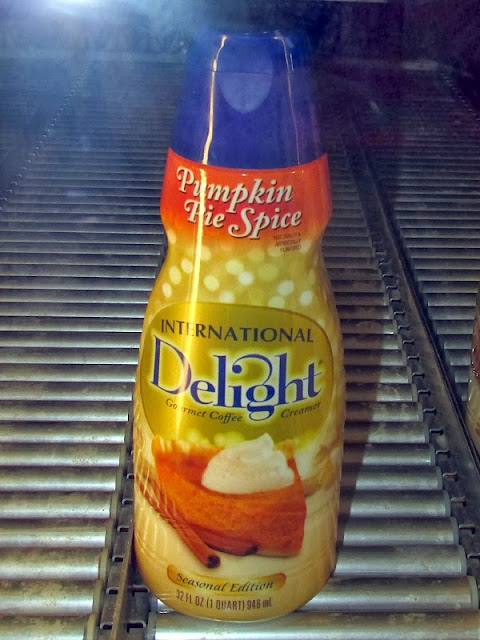 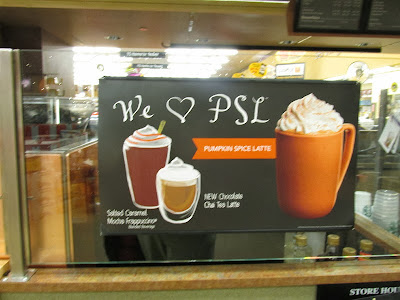 Fortunately for me, I hate coffee, even if it's a pumpkin-infused latte or frappuccino. (But did you know that Starbuck's will do a hot pumpkin drink without the coffee? It's called a pumpkin steamer. They'll also mix the pumpkin with hot chocolate!)

And I have no interest in ever trying beer... 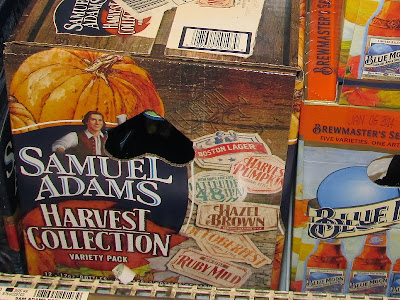 ...even if it's a seasonal Harvest Pumpkin beer. 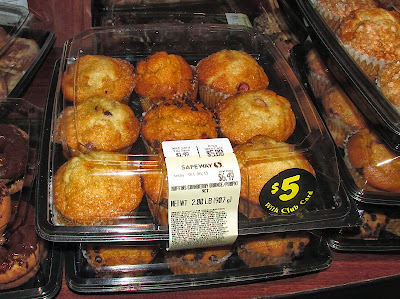 pumpkin tarts, and I'm sure I'm forgetting several other delicious variations.  I go looking for the stuff, stopping in at Starbuck's, which I seldom visit otherwise, and prowling the aisles at Safeway or Alberson's or Trader Joe's. I think half the fun is in the hunt for new Pumpkin Anythings to try.

But you know, I'm trying to re-lose some weight here after being derailed by a knee injury last December. I shouldn't be having pumpkin anything. The maker of a particular brand of pie totally has my number: 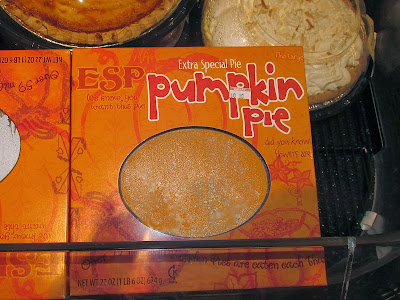 It says right on the box: "We know you want this pie." Yes. Yes, I do. But last night I settled for this instead: 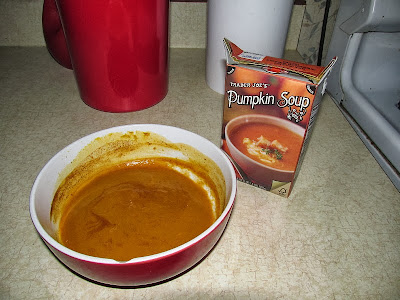 I want so much to like this. It should be like butternut squash or something, right? But I even added cinnamon, and I still failed to finish a small portion. And tonight I gave the tea another chance: 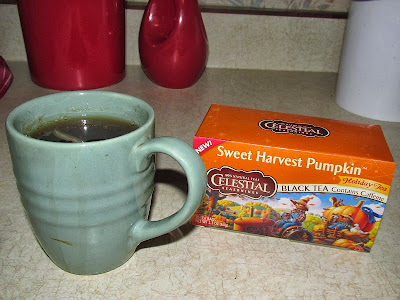 You know what? It just doesn't cut it. Pumpkin I don't have to feel guilty about is seldom pumpkin worth ingesting. Darn it!  I'd much rather have another taste of this: 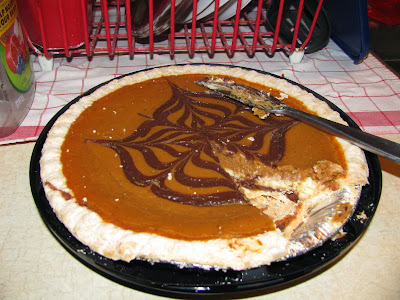 Now let's check out the other Robins' fun foods!