Weekend Assignment #78: You are preparing to evacuate your house due to an upcoming threat. You have already packed up all your essential items, people and pets. You have room for three non-essential items. What are they?

Remember, you already have your essentials: food, medicines, water, clothes, and all the people (including the furry ones) who live with you. "Non-essentials" are things you don't need but would like to have, and can include momentos, books, jewelry, objects of sentimental value, and so on and so forth.

Extra Credit: Have you ever been evacuated?

This question is similar to "What would you take to a desert island?" and "The house is on fire. What do you grab?" I've thought of both questions repeatedly over the years. Tonight, as I consider Scalzi's version of the problem, currently a real concern for people in Texas and Louisiana, I find my answers have changed somewhat. Nowadays, the key for me is not, "How much do you love it?" but "How replaceable is it?" 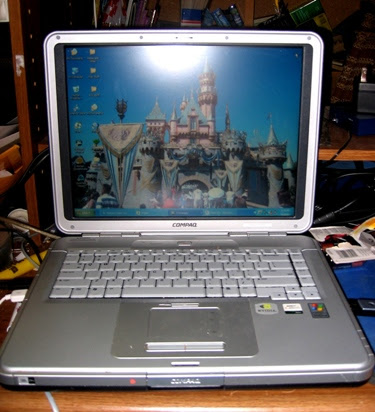 1. My laptop. Yes, I know, Scalzi said it first, but as he admitted, it barely counts as a nonessential. Most of my digital photos are on here, plus my novels, serials, poetry, old homework, certain blog entries, and master files for all the web pages I maintain. There's more than enough music on there to fill an iPod, and a handful of digital videos I shot, and lots of old notes and correspondence and saved email. It would be a wrench to lose my old papers - early handwritten and typed pages about Mâvarin, childhood drawings, and stories I never finished - but losing them would not be a disaster. Losing the laptop, with no backup anywhere, would be absolutely crushing.


2. A Box of Books. Scalzi fudged by counting a whole box as one thing, and so will I. It's really the only way to go. John and I have thousands of books, but the very rarest, most valuable ones would probably just about fit in one box. They include the following: 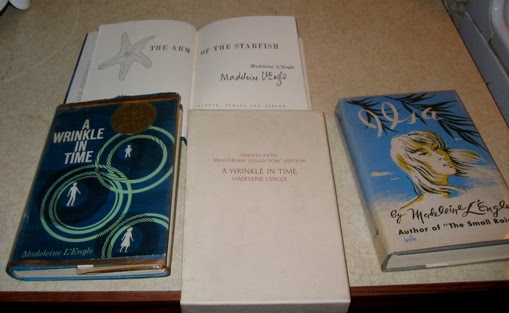 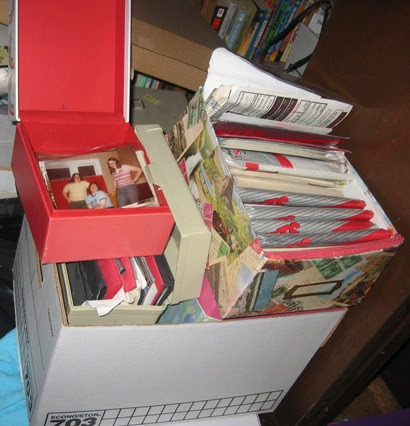 3. A box of photos. Since starting this blog, I've really come to appreciate my collection of old photos. Some of them are from my childhood and college years, some from early days of our marriage, and a lot are of Tucson, Disneyland and Walt Disney World. A handful belonged to my mom, and in some cases go back sixty years or more. It distresses me to see how many have melted or otherwise become damaged over the years, particularly my Polaroids.

I've scanned a number of photos into the laptop, but a lot of this stuff is irreplaceable. This point was brought home to me last week at the gym, as I walked on the treadmill and watched CNN with the sound off. In the upper left part of the screen, they were showing names, ages and photos of children missing since Katrina. More than a few of them were featured with just a name, a city and a generic silhouette of a boy or a girl. I thought, what parent doesn't have any photos of their kid? Then I realized that the family photos of many of these people were destroyed in the flood.

I actually have more photos than will fit in my not-so-theoretical banker's box. The leftovers, though, are in notebooks on a high shelf. If there's ever a flood on Calle *Mumble* in Tucson, I take my chances on those surviving.

What's not on this list? Replaceable and bulky stuff. Photocopied scripts can be copied again, and can't be carried away easily. Commercial CDs and DVDs can be bought or rented. Most books I care about are still in print in some form. Too bad about the vintage Barbies, but they can also be replaced. I have original artwork of the Eighth Doctor that's irreplaceable, but it's too big to carry easily. I'd probably take a chance on it surviving on the den wall.

Extra Credit: The closest I came to being evacuated was early one weekend morning in March, 1978. I think it was my birthday, and a Sunday. I was living in a rooming house that had literally been condemned in a legal dispute between a judge, my ex-boyfriend, and the new landlord, a bit of a jerk who hadn't actually closed on the property yet.

About 7:30 AM, Jenny and another puppy I had temporarily, Wafer, started barking, which woke me up. When I tried to get them to stop, my neighbor across the hall heard me, and shouted, "Karen, get out! There's a fire!" This was well before the invention of the laptop, and I didn't grab any books or photos, either. I grabbed just enough clothing to manage in public, and not freeze in March weather - much. The ensemble consisted of a jacket over a nightgown. I think I had on flip-flops, and had just cut my foot on broken glass. I didn't even manage to find my glasses! I just got the puppies and got out! A fireman later retrieved my glasses for me.

Fortunately, the fire was in a second floor apartment. Aside from a smokey smell, it never reached my little studio apartment at all.


Written by mavarin .
This entry has 5 comments:

Yes...save the Thurbers! Oh my a first edition Thurber. I used to have some first editions, not of Thurber, but some other authors and I lost them a few years ago. I was so sad to not be able to just pick them up and get lost in those magical pages, hand signed by the authors who wrote them. There is something really special in that. Sigh. Yes! Save the Thurbers!

I am in awe of your books. It looks like some of them may be first editions-- no wonder you want to save them. I also find how so many of us that are writers posted the same list.

The possibility of having to flee a night fire (and 20 extra pounds since high school) is why I never sleep nude.
Comment from monponsett - 9/23/05 4:40 AM 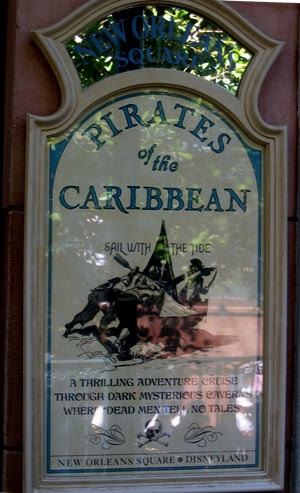 Arr! I be given to understand that Monday be Talk Like a Pirate Day! Time to pay tribute to the scurvy bilge rats who've been ravaging the same town for nearly 40 years! Aye, I be jabberin' again about

Pirates of the Caribbean!

I'll not talk yer ear off tonight, matey. 'Tis past 2 AM already. So it's a few words per picture afore I be settin' sail fer Slumberland!

Below: I mustn't let this swab near Barbie! He be too much fer landlubber Ken to handle! 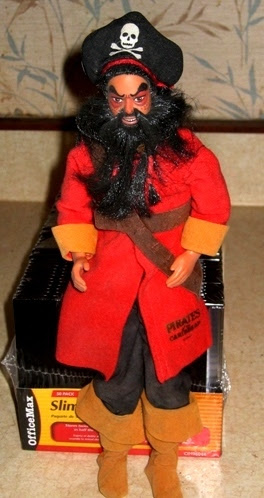 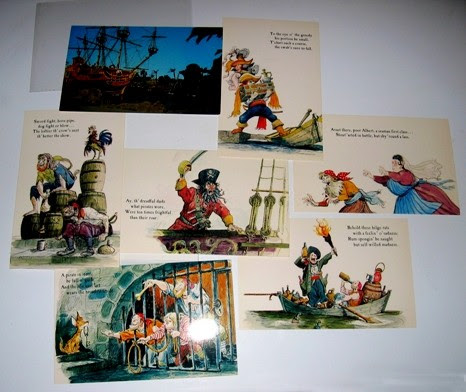 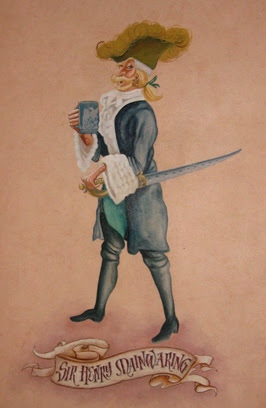 Above: this Marc Davis historical portrait graces a wall, and keeps an eye on unsuspecting tourists.

Below: this dead pirate tells no tales as he guards the cursed treasure! 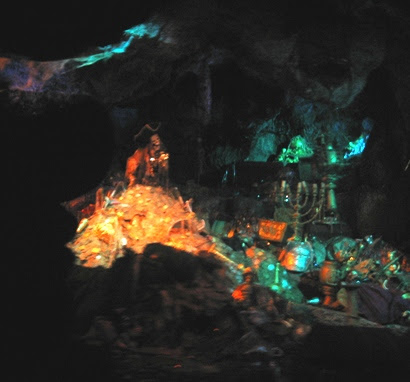 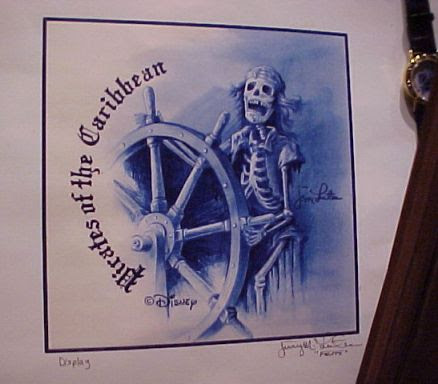 Yo Ho! Hoist yer colors for the gallants who introduced this scurvy lot to the world: 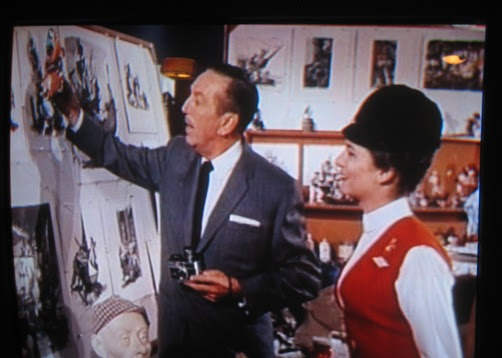 and Captain of the lot, who died just before the pirates set sail:
Walt Disney

Just Disney.com: Pirates of the Caribbean

P.S. And I've not forgotten Jack Sparrow, who came along much later: 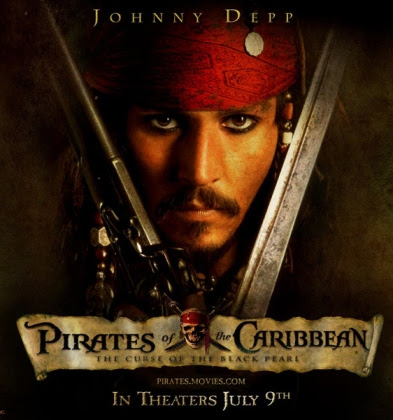 Written by mavarin.
This entry has 5 comments:

I was hoping today when I found out what the assignment was that you would do something with the Pirates of the Caribbean! Ahh so very cool, you got to go and see the Pirates at Disneyland not all that long ago. Very cool as usual!