Round Robin: A Peek into the eBay Graveyard

This week for the Round Robin Photo Challenges, Kim of Nekked Lizard Adventures asks us to photograph "An Item You'd Like To Sell On EBAY, But You're Too Embarrassed."

Actually in my case, it's not a question of embarrassment. I've sold everything from cookie jars to a JFK candy dish on eBay, from Fisher-Price dolls to Panavision-branded license plate holders. I'm not embarrassed by any of it. No, what stopped me selling on eBay, cold-turkey, about a decade ago, was the frustration and annoyance of all the work involved. I hated tracking what had been paid for by whom, packing stuff up and taking it to Cherrybell Station to be mailed, and my vague attempt at bookkeeping, which included keeping a box of emails and receipts in case I ever needed to track it all properly. More and more, I pondered whether relisting things like the JFK candy dish or the 1950s ashtrays was worth the effort, and whether, aside from the Snoopy Astronaut, the Niagara Falls lamp, the Panavision license plate holders and that pair of tiles with Eqyptian figures on them, any of this stuff made enough money to offset the downside of it all. Financially, this included the packing materials, the eBay fees, and the weekly purchases at yard sales and estate sales and rummage sales and thrift shops. Less tangible costs included the mental anguish of learning that the U.S. Postal Service broke the Woodstock cookie jar, the sleep I lost going out to yard sales at 8 AM or earlier, and most of all, the exponentially-increasing clutter of unsold, possibly unsalable eBay stock. A decade later, we still have a lot of it. Let's take a photographic peek in the overcrowded eBay room, here at the Museum of the Weird: 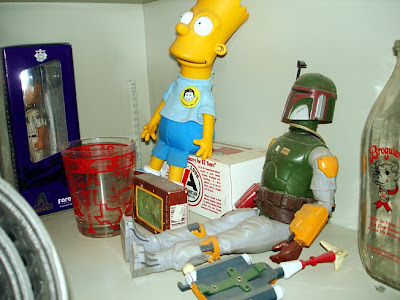 Here's a striking example of the nature of the problem. In theory, someone should care about a Boba Fett toy from circa 1980, an early-ish Bart doll, molded green Star Wars soap, or a 50-year-old glass milk bottle, formerly delivered by a milkman from some regional dairy. But do they, though? Does anyone really want any of this stuff, enough to bid it up and send in their money to a stranger in Tucson? 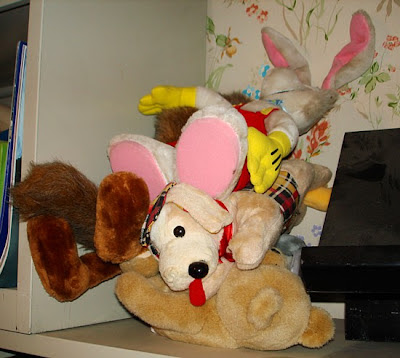 I like this jumble of old toys. I think the Roger Rabbit talks, and that the brown feet belong to Wile E Coyote. The bear is a Pooh, if I remember correctly, but not an especially interesting one. Or maybe it's just a bear. I didn't get close enough to check, but we have had a Pooh for sale at one time or another.

My favorite toy here is the oldest one: a dog with a tartan tam on its head and a pipe in its mouth. I couldn't resist buying it at an estate sale, despite (or maybe because of) the fact that the dog has no nose. (How does it smell?) 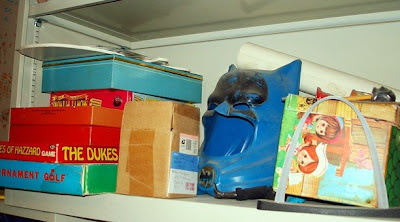 The Gateway Arch was a souvenir I bought in 1986; John thought it was no longer something we needed to own, but it never made it out the door. Behind it is a Little Kiddles case. I think John found the hard plastic Batman cowl at the Tanque Verde Swap Meet, circa 1986. The tournament golf game was locally-produced, many years ago. And surely there are still fans of The Dukes of Hazzard. I don't think I've ever met any, but I know they exist. 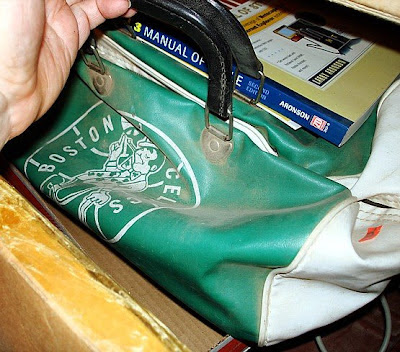 Anybody want an old Boston Celtics gym bag? We also have a golf bag somewhere from a Frank Sinatra golf tournament. Or did we sell that? 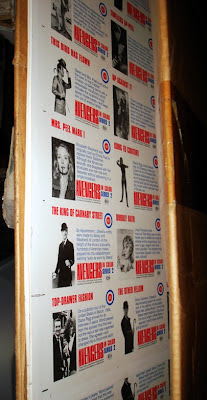 And of course we also have some old Cornerstone stock, including uncut sheets of The Avengers trading cards. They might be our archive copies - or maybe not.

Gotta rush this, and break my personal rule not to post before midnight MST. My flight to Disneyland leaves in 8 hours, and I have to pack, sleep, and get to the airport between now and then. I'll catch up with everyone on Sunday night or Monday night. Meanwhile, check out the other Robins' entries:

Teena - Posted!
It's all about me!
http://purple4mee.blogspot.com


Next time you hear from me, I'll be at the Castle Inn outside Disneyland!

Email ThisBlogThis!Share to TwitterShare to FacebookShare to Pinterest
Labels: eBay, Round Robin Photo

Wow...you've got some good stuff. I didn't know some of it still existed. How fun was this!

Quite a collection! You know, here we have a store called I Sold It! that will sell your stuff on eBay for you. It sounds like it might be worth it to you to avoid all the hassle, if you have something like that near you.

And I'm with you. I'm a shameless packrat.

I like the Wyle E Coyote and the Avengers trading cards, both are blasts from my past.

I've never done anything on eBay but lose money. Now I can't even understand their system! Amazon, on the other hand, is a breeze. Made profits on the first two sales, which came immediately.

Enjoy your trip to fantasyland!

Ebay's system is getting more arcane by the minute. You have a very nice stash there, though. I had never seen your Avenger's cards -- I wish I had when I was younger and collecting. Most of my Avengers ephemera is living with my college roommate. I'm going to tell her about your post. Don't be surprised if she makes an offer.

I draw the line (of emmbarrassment) at the Little Kiddles case. That is collectible! The rest of it is one pretty impressive collection of junk!

You have the coolest stuff. The Dukes of Hazzard is a fun one. Dodge muscle car fans love that show. Oh yeah!

Oh...fun fun fun! I could definitely find a TON of things for this challenge. Too bad I didn't play. : (

Karen, you have lots of stuff to trade on E-bay! LOTS! :)