This past weekend was our 34th Anniversary. Like last year, we celebrated the day with a trip to Disneyland. We would go every year if we could, but it's not always easy to get away, financially or in terms of obligations at home. Leaving my dad unvisited for three days was going to be a problem, but friends from church stepped in to help, and we managed to get away for three days, Saturday morning to Monday night. The highlights and lowlights are as follows:

Best Technology Improvement: Using my iPhone this year was less of a problem than last year, due to a battery pack I brought with me to keep the battery from running down halfway through the day. I still ran low, but the phone never quite died on me this year. With it I was able to run several Disneyland-related apps, including something called MouseWait, which had crowd-sourced attraction waiting times, restaurant reviews and more. It's all a huge upgrade from my old Samsung flip phones of yesteryear, which used to be continually "Looking for Service" at Disneyland until the battery drained. 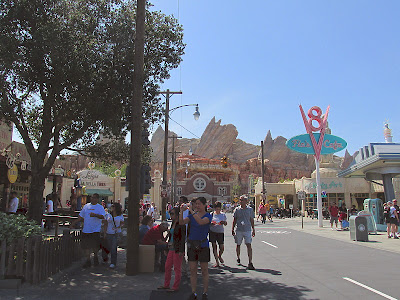 Best New Attraction: Cars Land at Disney's California Adventure, both the overall themed area and the specific attraction at the end of the street, Radiator Springs Racers. It was upsetting last year to be at California Adventure just two weeks before Cars Land opened, and only be able to glimpse it afar by peeking over a high wall. But it was worth the wait, and the return visit. The little California/Arizona border town (judging by the geology and plant life) of Radiator Springs is lovingly rendered in full scale, from Flo's V8 Diner to Luigi's Tires, and all the other familiar businesses from the first Cars film. Inside they are mostly shops, but the Cars Land merchandise is classy and inventive. The Luigi's Flying Tires attraction was a disappointment to me, the tires being too big for a single rider to control more than a tiny bit, and Mater's Junkyard Jamboree was fun but not amazing. The best part was Mator's square dance caller-style accompaniment for each set of riders, different each time as we await our turn. 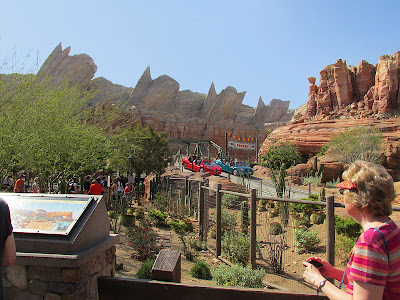 But Radiator Springs Racers! Oh, my! There's a reason the line at 9:15 AM just to get a Fastpass for this hot new attraction was two or three blocks long! We opted to skip the Fastpass and stand by immediately. The wait was already an hour and a half, but it was worth it. The pre-ride line wound through beautiful scenery with a fun, clever backstory about the founding of Radiator Springs. Eventually we arrived at the loading area, in a cavern at the edge of the red rock mountains. We soon found ourselves in a full-sized, four-door race car, racing through the mountains in competition with another carful of riders. We lost, but who cares? It was awesome! We would have gotten a Fastpass afterward for a second go, but by then all the Fastpasses were gone for the day.

Biggest Disappointment: The Blue Bayou Restaurant is normally my favorite place to eat at Disneyland, but every year it seems less worthwhile. I love the romance of the fake dockside-at-night ambiance, with the restaurant's dining area located across the lagoon from the peaceful opening scene of Pirates of the Caribbean. Service is good and the menu is upscale - perhaps too upscale. For $112 including tip, the two of us had rack of lamb with a somewhat paltry amount of medium rare meat - and we'd both ordered medium well. At that price, ambiance and a miserly quantity of mediocre food just isn't good enough.

Best Food Find: Still hungry several hours after the Blue Bayou, I asked a cast member for the location of a food cart selling Disneyland's "famous" turkey legs. I was directed to a cottage-style food stand near the Matterhorn, I think it was called Edelweiss Snacks. They had not just smoked turkey legs but also barbecued port shanks for the same price, $8.95. I opted for the pork, and I didn't regret it! It was very tasty, not too greasy or sweet and only a little bit sticky. And there was more meat there than in my $40 rack of lamb entree earlier! 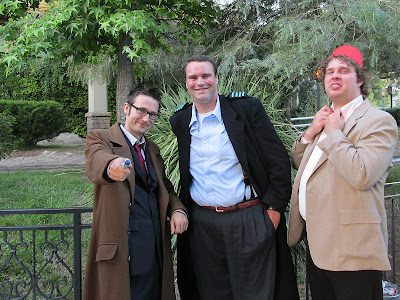 Best Unexpected Encounter: The day after the terrific Doctor Who season finale, which we were lucky enough to watch in HD at our hotel room, I spotted these Doctor Who cosplayers, appropriately turning up in Tomorrowland. Later I caught up with them and snapped this photo. The costuming is better than the physical resemblance, particularly in the case of the Eleventh Doctor (right). The others are portraying (left to right) the Tenth Doctor and Captain Jack Harkness. They told me there was also a Clara Oswald around somewhere, but I didn't see her. 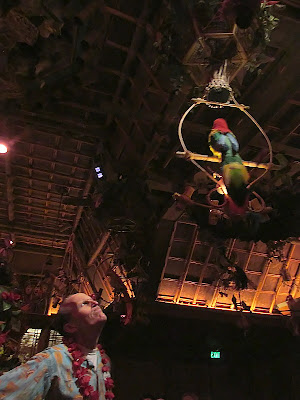 Best Cast Member Performance: The pre-show and post-show of the venerable Enchanted Tiki Room was shiny and new because of this man, who called himself Tiki Maynard. He did new gags, voices and accents, and was generally highly amusing. I tried to congratulate him afterward, but the cast member I spoke to, who looked exactly like him, wore a name tag that said George, and claimed not to be Tiki Maynard at all.

Biggest Waste of Time: Innoventions, which seldom has anything better than remotely interesting, had an exhibit of Tony Stark's Iron Man suits, from relatively primitive beginnings to the latest and greatest upgrade as seen in Iron Man 3. We got in a line to go have a look at the suits, only to fine ourselves stuck in a queue for a game in which the visitor virtually dons a suit and watches his or her animated self move around in it. Neither of us had the slightest interest in doing this! Eventually we pushed our way out of there (politely, of course) and made our way around to where we could see the physical costumes and props from the films.

Worst Mistake: I have to award a tie here. One mistake was not allowing a fourth day, to give us more time for travel and rest. John can't take the go-go-go of three long days at the park on inadequate sleep, and even I was pretty exhausted by the time the plane home took off. The other was John's mistake of not checking his shoes for signs of wear before relying on them for three days of almost continual walking around and standing in line. His shoes turned out to be badly worn out inside, and he ended up with a two inch blister. I got a box of the biggest bandages the hotel gift shop offered, and taped him up for the final afternoon.

Round Robin: Before and After: A Change for the Worse

This is my second entry for this week's Round Robin Challenge: Before And After. The "Before" image in the other one is a bit disturbing, but this entry is safe to look at, I promise!

Once upon a time, there was a venerable old shopping center at Broadway and Wilmot in Tucson called The Mercado. It featured pink adobe buildings with tile roofs. Once years ago I wrote about one of the shops there, called Choc-alot, which had an astounding variety of gourmet chocolates in different shapes and recipes. Years before that, the United Whovians of Tucson honored Doctor Who actor John Levene at a restaurant there called The Good Earth. That restaurant is long gone, but just a month ago I had lunch at a different restaurant there called El Charro.

But one weekend recently there were suddenly dozens of flags and banners flying outside the old pink buildings. Some of them were Tea Party-inspired, some were about cars and even tattoos. Odd. A few days after that, this happened: 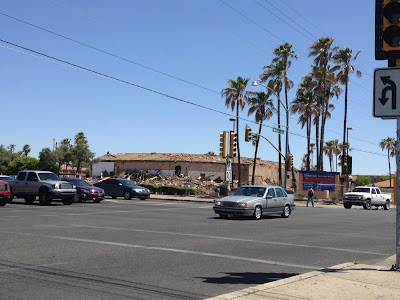 First a bunch of tiles were knocked off the roof of El Charro. Was it malicious, or were they renovating the building? Either way, the restaurant had been closed. But that was just the beginning. 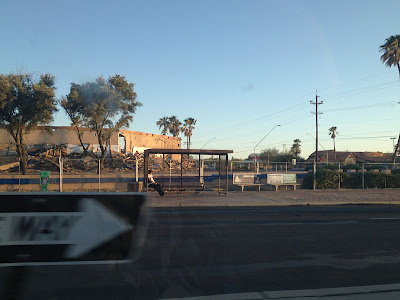 Soon the building was just a shell. 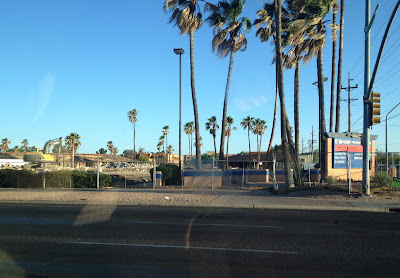 Then it was a pile of rubble. And the building behind it was starting to go the same way. 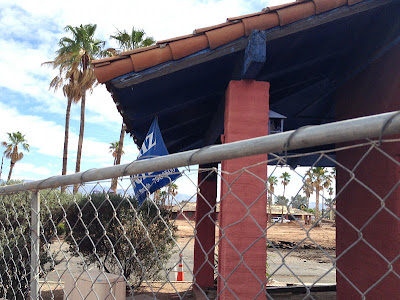 For a while the building that once housed Choc-alot survived. 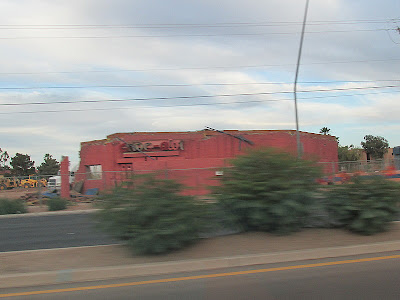 So what's the point of all this destruction, of these neat old buildings holding decades of memories? 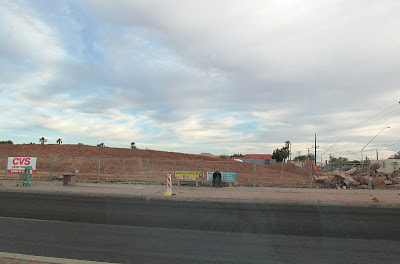 It's going to be the site of a CVS Pharmacy, in a town that always had several CVS pharmacies, some Osco locations and a Walgreen's at practically every major intersection. What else? Phooey.

That's it for this one. Check out my other entry if you can handle blood and guts type stuff. And definitely please also go see the other Robins' entries:
Linking List
as of Saturday, May 18th, 12 AM MST
Jama - Posted!
Sweet Memories
http://mummyjam.blogspot.com
Karen - Posted! (two entries)
Outpost Mâvarin
http://outmavarin.blogspot.com
http://www.facebook.com/mavarin
@mavarin
Carly - Posted!
Ellipsis
http://ellipsissuddenlycarly.blogspot.com

Email ThisBlogThis!Share to TwitterShare to FacebookShare to Pinterest
Labels: Before and After, Round Robin Photo, Tucson

Round Robin: Before and After: A Change for the Better

I have two entries for this week's Round Robin Challenge: Before And After. The "Before" image in this one is a bit disturbing, so I'm going to put a jump break so you can skip the pictures if you dislike gory body parts. The other entry is safe, I promise!

Email ThisBlogThis!Share to TwitterShare to FacebookShare to Pinterest
Labels: Accident, Before and After, Personal, Round Robin Photo

Round Robin Challenge: A Garden of Gardens 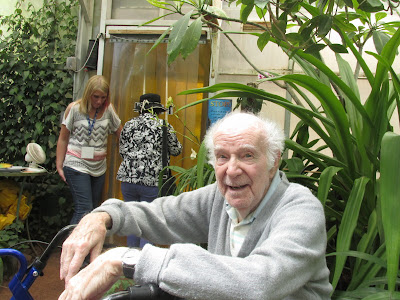 I just happen to be ready for this week's Round Robin Challenge: Gardens. Two weeks ago I took my dad to see the Tucson Botanical Gardens, just one of the weekly "adventures" I take him on each Saturday to get him out of the Memory Care unit and out into the world for a few hours. I offered him the choice of a drive or a garden, and he chose the garden, which surprised me. 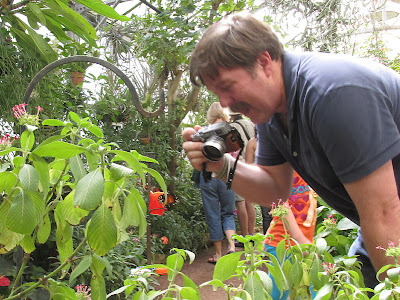 One place I had not seen there before was a butterfly exhibit, which was basically inside a greenhouse. I tried and failed to get a decent picture of any of the many colorful butterflies and moths that were zooming around. This guy, I think, was more successful. 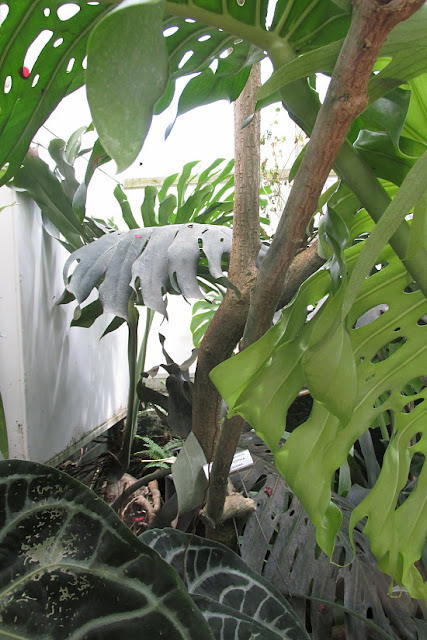 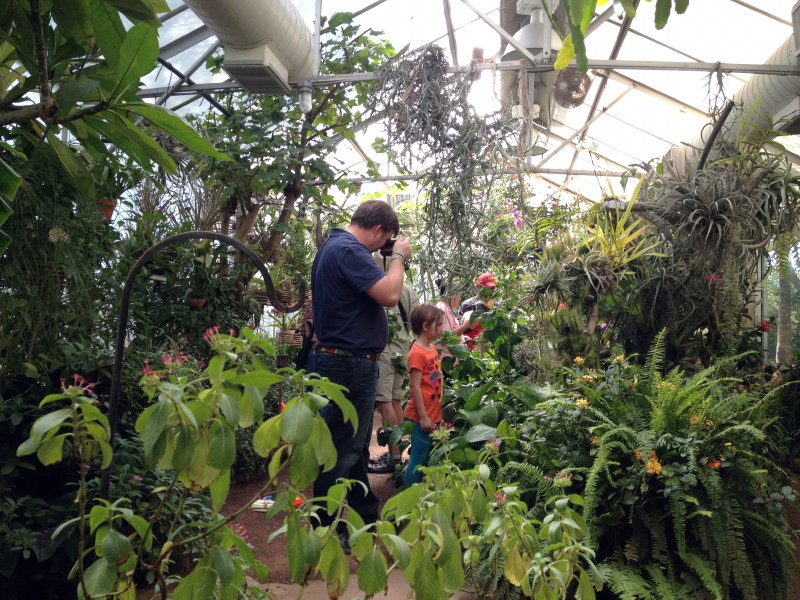 I previously photographed Tucson Botanical Gardens back in June 2010. You can find my Picasa / Google+ album here. I knew I wouldn't get as far with Dad along, but I figured he might get something out of even a little bit of this massive place, a collection of 16 themed gardens, parts of which date back to the 1930s. 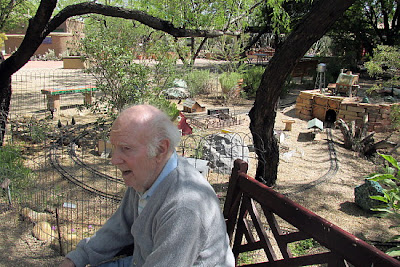 Once we left the butterfly exhibit, though, Dad's interest and stamina waned quickly. He wasn't even interested in the garden railroad. Pretty soon he wanted to know how to "get the hell out of here." 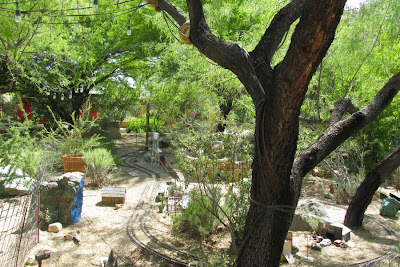 Now let's see what other gardens people found to photograph!

I am sick at the moment, and injured (see my Facebook page), and I have to work tomorrow evening to make up for not getting to the office today. But I'll make the rounds of the robins as soon as I can.