RR and MPS Scheduling Note - and a Brief Rant

Not too surprisingly or unforgivably - I hope! - I'm not going to attempt to post the Monday Photo Shoot results tonight, post the new MPS topic or make the rounds of the Round Robin entries. I've been sitting at this computer for two hours with my feet throbbing, transferring and editing photos, watching a new Doctor Who clip and writing the belated entry for last night. Now I'm going to briefly recount the story of my difficult day, take four ibuprofen and a long bath, and go to bed. I'll post the Monday Photo Shoot stuff on Monday (evening). What a concept! 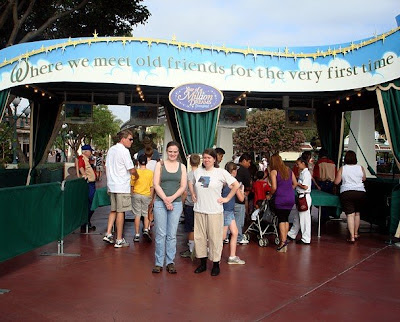 Sara (left) and Sarah under an astoundingly apt sign
Aside from my extreme lameness, the day started well. My alarm didn't go off, but Sara and Sarah woke me half an hour later. 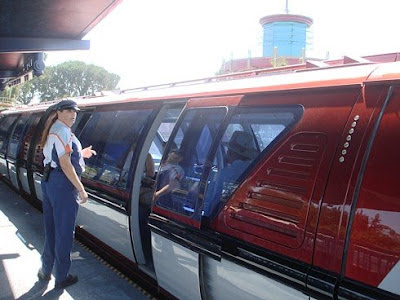 The new Mark VII Monorail
We got right in at Rainforest Cafe, I got the last copy of a limited edition Disneyland pin set at the Downtown Disney pin shop, and the shiny new red Mark VII monorail was loading as we climbed up to the platform. We got on Indiana Jones Adventure, enjoyed Disneyland: The First Fifty Years, and I learned some stuff I didn't know from the cast member at the museumy-thing there. We went over to California Adventure for Soarin Over California and Turtle Talk With Crush, and then it was time for me to go.

My pickup from Primetime Shuttles - remember that name - was scheduled for 3:45 PM at Disneyland. That's Disneyland itself, selected from the drop-down on their online reservations page. For the ride from LAX, they had kept me waiting half an hour with no explanation, but still arrived a little early at the hotel. For the return trip, they had left me a voicemail changing the time to 4:10 PM, but I didn't know this. At 3:35 I went out to the lot where all the trams and shuttles and cabs pick up and drop off, and asked where Primetime picked up. People either didn't know or gave me wrong information. About 3:50 PM I lugged my luggage back to Disney Customer Relations and asked for help. The cast member called Primetime, repeatedly, finally got someone to pick up, gave them my name and situation, and was told to have me go across the street to the IHOP and be picked up there. "You still have time," she said. "They changed the departure to 4:10 for traffic reasons."

So I thanked her and hobbled back across the parking lot and across the street to the IHOP. It was probably a few minutes after 4 PM by then. I'm reasonably sure it wasn't ten after. There was no sign of a Primetime van. I waited for 45 minutes, staring at every red van on Harbor Blvd, searching for my confo and trying to call to find out where the hell they were. I even managed to flag down a Primetime van in the middle lane, who rolled down his window, admitted he was headed for LAX and flat out refused to pick me up. When I finally got through to reservations (their everything-else option rang about 50 times, and my phone thinks pressing 2 means "mute"), they were rude, called me a no-show, and offered to pick me up at 7:30 PM to take me to the airport for my 7 PM flight. 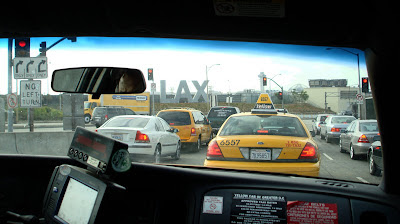 Finally reaching LAX after my 2 1/2 hour ordeal
So I took a cab. He was fast, friendly and very expensive.

Listen, I seldom rant against a whole company. I don't think I've even told you my Jack in the Box story. But don't take Primetime.

Then I was in a horrible long, slow line to check in at Delta. Fortunately, one of their agents was on the ball enough to eventually ask who was waiting to check in for the Tucson flight, which by then was leaving in 45 minutes or less. I checked in, was told to lug my one checked bag over to an x-ray station 200 feet away, and then went through security myself elsewhere. I was so exhausted and flustered by then that I left my boarding pass in one of the bins being x-rayed.

But I made the flight. The seat was narrow and uncomfortable, but I got home. And the dogs were glad to see me. Tuffy's starting to have trouble breathing, though. I really think we're coming down to the end with her.

Tomorrow night, we move on to happier things - I hope!

Sorry to hear the annoyances kept piling up for you on Sunday. But I'm very glad to know you got home safely, and thank you for the amazing weekend!

I recommend Super Shuttle in the future. They were great, even though I didn't have the correct reservations. And they were early.