Round Robin: Inside Out

For the Round Robin Challenge: Inside Out, Outside In, I asked to see stuff outside that you would normally find inside, or stuff seen inside that you would expect to see outside. My first post tonight (scroll down) was of outside stuff seen inside recently, namely critters. For this post, I'd like to show you the consequences of leaving inside stuff outside. 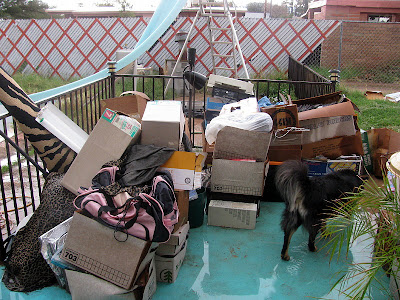 It was late September, 2011. John thought the monsoon was over. Tucson's rainy season officially runs from June 15th to September 30th, but is by no means that predictable. But John was anxious to start organizing stuff in the house, and to do that he needed the space. So he took a chance, and took many boxes of stuff in storage - books, magazines, papers, collectible figures, part of John's vintage and not-so-vintage Star Trek collection, our college films, old electronics, etc. - and put them outside temporarily. You can guess what happened next. 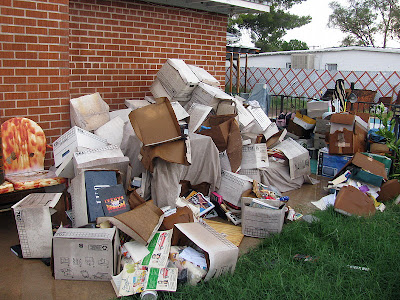 It was a major, major storm, with lots of rain and flash flooding. Water on the concrete slab in back was about two inches deep in no time. John was at work, so it was up to me to salvage what I could. 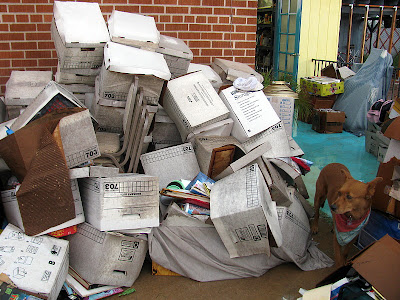 I spent a lot of time that afternoon moving boxes near the wall to help protect them from the elements, and stacking them to keep at least some of them from sitting in the water on the ground. Unfortunately, wet cardboard doesn't stack well. 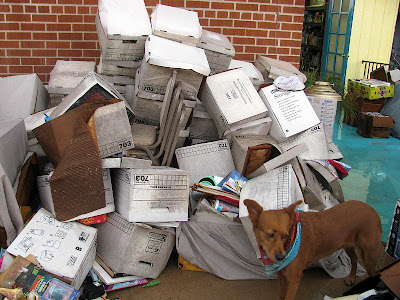 I also managed to bring in a number of things, but nothing was completely undamaged. I spent several days sorting through the rest, saving what I could. And yes, it rained at least once more as I worked. What a disaster! Seeing so many irreplaceable bits of our past either damaged or ruined was truly heartbreaking. But on the plus side, it did motivate us to sort through our junk and get rid of many boxes of less important items.

That's it for me for this week! Let's check out the other Robins' entries:


And don't forget: everyone is welcome to join in on the Round Robin meme. Click here for details!

Email ThisBlogThis!Share to TwitterShare to FacebookShare to Pinterest
Labels: Inside Out, Monsoon, Museum of the Weird, Photos, Round Robin Photo

Round Robin: Outside In

For the Round Robin Challenge: Inside Out, Outside In, I asked to see stuff outside that you would normally find inside, or stuff seen inside that you would expect to see outside. I have examples of both for you. This first post is of outside stuff seen inside. Namely, critters! From time to time, representatives of many species of Arizona wildlife find their way into the house, from black widows to geckos. For example: 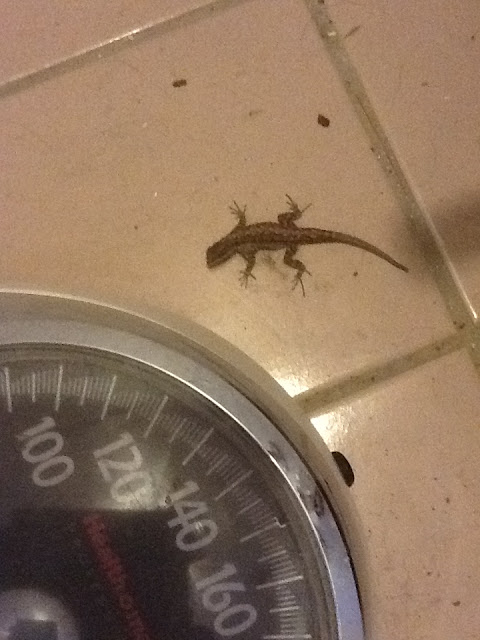 This lizard turned up next to our bathroom scale on July 18th. I photographed him before catching him to release outside. We get lizards in the house fairly often. 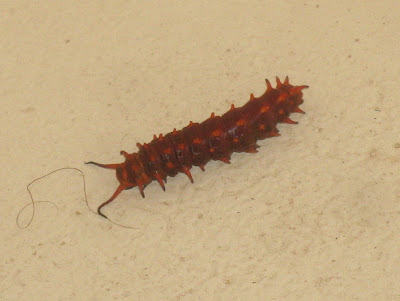 This was in my tub on August 2nd. I thought for a moment that it was a centipede, but soon realized it was a caterpillar. I Googled "Arizona red caterpillar" and soon discovered it was a pipevine swallowtail butterfly - or would be someday. 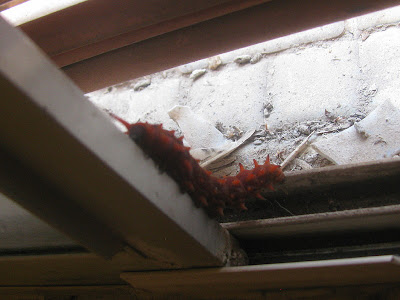 But I couldn't let it stay in my bathtub! So I caught it and put ot on the bathroom windowsill, expecting it to crawl away. But no: it liked the edge of my window, and decided to stay. 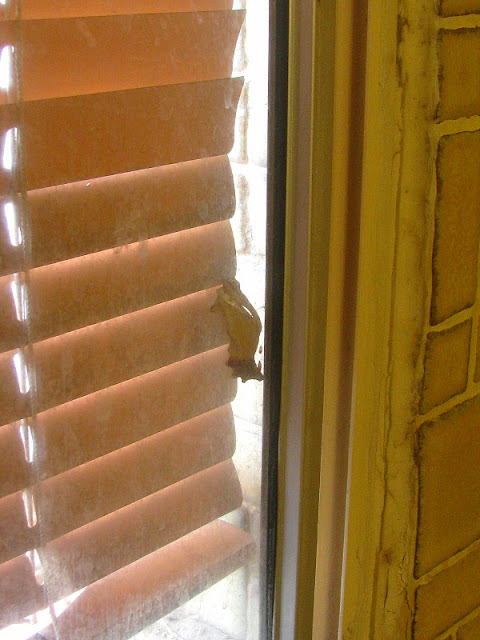 The caterpillar changed color over the next few days, until it was fairly obviously a pupa or cocoon. On August 13th, I noticed a slit at the top. The butterfly had emerged! But where was it? 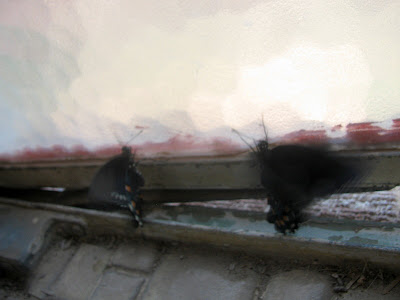 I gently lifted the Venetian blinds. Behind them, two pipevine swallowtails struggled to get a grip on the window, or escape outside, or both. 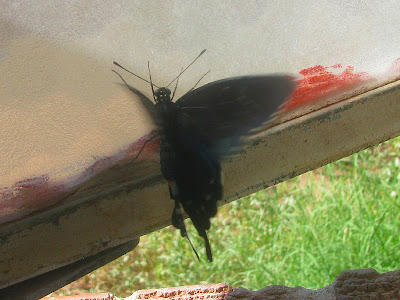 One of them quickly escaped. The other struggled a moment longer. 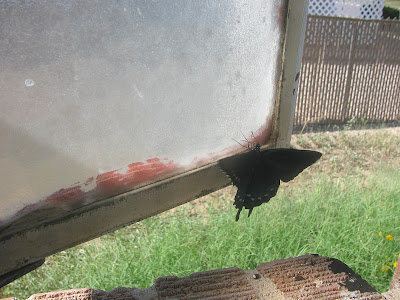 Finally it got hold of the edge of the window. Then it was gone. Oddly, I found a lizard on the ledge a few minutes later. It darted away when I pointed my camera at it. 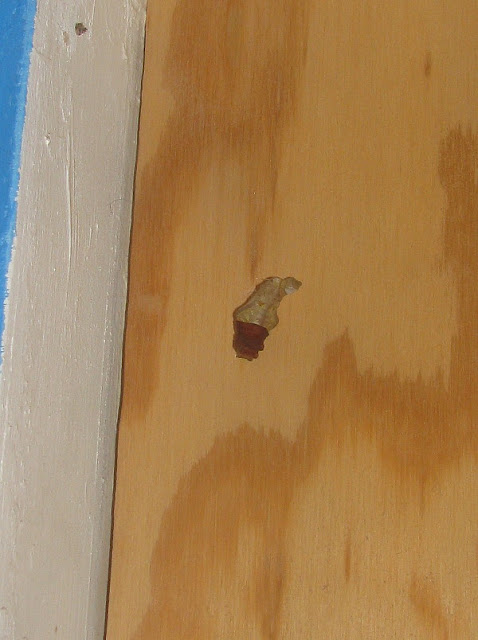 Then last week, John told me there was a new pupa in the bedroom, over the air conditioner. I'm watching for further developments.

I'll have a second post in the few minutes. Meanwhile, check out the other Robins' entries:

Email ThisBlogThis!Share to TwitterShare to FacebookShare to Pinterest
Labels: Arizona, Butterflies, critters, Inside Out, Museum of the Weird, Round Robin Photo

Round Robin: It's (Not) A Dry Heat

For this week's Round Robin Photo Challenge: Hot! Hot! Hot!, I asked to see pictures that somehow convey the impression of heat. Short of showing a thermometer or a fire, this is a little tricky, and I'm not sure I've quite managed it. But here are some shots taken in Tucson in July and August, during the summer monsoon when we have both heat and humidity. This morning it was in the 80s, with humidity in the 40s; this afternoon it hit 108 with only 14% humidity. Hot enough for you? 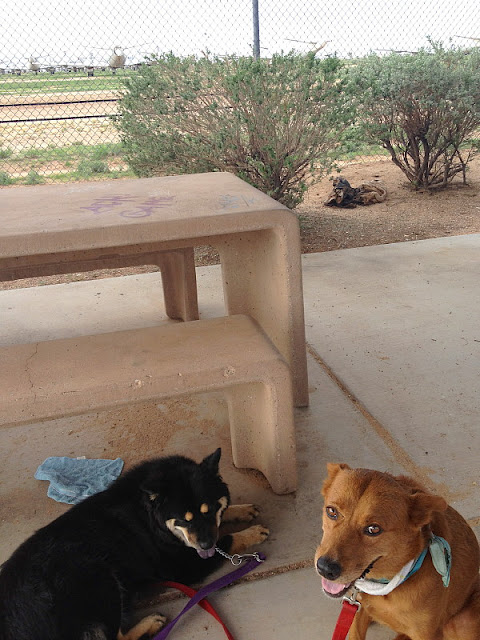 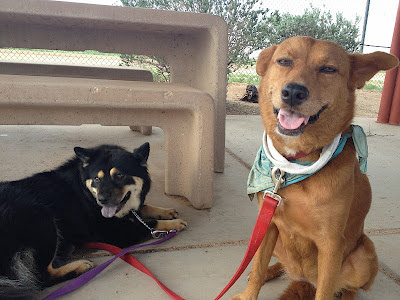 The dogs catch some shade at the ramada (a sheltered area, with a roof but no walls) by the Boneyard (airplane graveyard). This must be when I lost that washcloth! 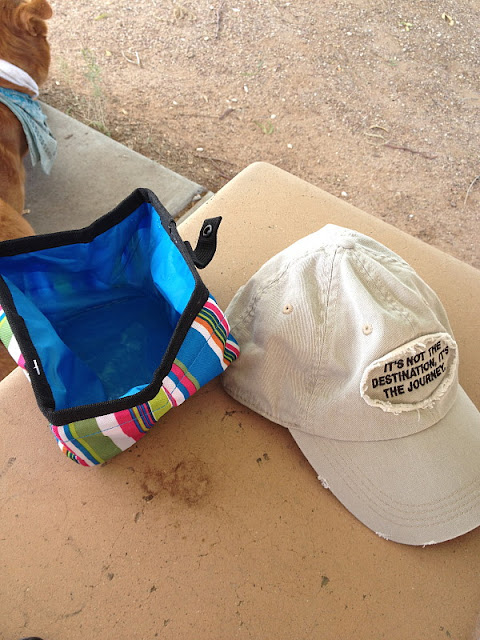 Protection against the heat: my hat and the dogs' foldable water dish. 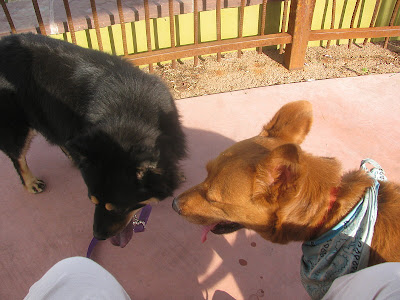 Not much shade at the moment at Michael Perry Park. 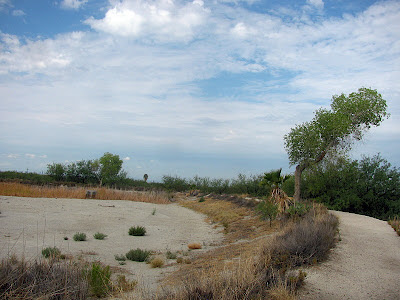 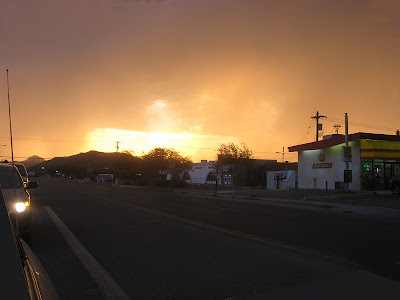 The dreadful orange sky of a stormy sunset reminds us of the heat of the sun itself.

Now let's see what other Robins found that was really hot!