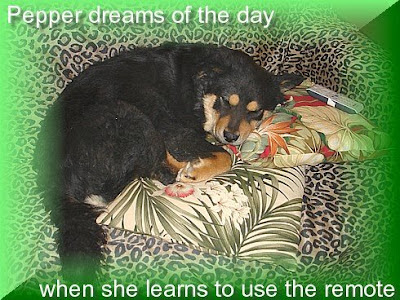 I came down with a wicked neck ache earlier this evening while watching Terry Jones' Medieval Lives on DVD, so I carefully arranged my pillows and went to bed for several hours. And dreamed...

In one dream, I visited a friend (who doesn't actually live in Tucson; she hasn't for years and years) only to encounter the later stages of a training exercise. A team of flack-jacketed police was examining brown bag lunches from Baggin's, to determine which one was fictionally laced with some kind of poison. The key to the puzzle seemed to have something to do with looking for traces of salt versus pepper. What this was supposed to prove remains unclear to me, but there was salt in my purse, and I had left an empty Baggin's bag behind in my friend's attic the day before.

Meanwhile at home, a choir of priests sang amusingly as a different set of police conducted a different training exercise, which seemed to involve playing practical jokes and planting evidence at my next door neighbor's house. At one point I was warned off trying to put my shoe on, because there was a revolver hidden in it.

Yes, it's all nonsense, maybe not even interesting or amusing nonsense. The only trigger I can think of for it, aside from people at work not offering to bring me anything from Baggin's or Quisno's, and I'm too shy to ask, is that on the way home from work an NPR report about CIA torture included someone defensively claiming that one of the techniques under fire was simply the playing of "Good Cop, Bad Cop." Go figure.

Is this the sort of thing I miss out on when I don't get adequate sleep? And if so, why does the human brain require the dreaming of incomprehensible dreams? I mean, why is a dream about police doing silly things vital to my health? I'm not arguing against it; I recognize that fighting against sleep is self-destructive. But why does it function as it does?

No, no. This is the dream. You're still in the prison cell in Russia!