Series and Serials, and the Doctor's Daughter

Well, I'm not actually that sorry. That's a recurring Doctor Who quote, and it seems appropriate, because my head is full of Doctor Who and not much else at the moment, so I have to let you down with another brief, odds-and-ends posting. (Having said that, however, I promptly veered into a rant instead.)

I said weeks ago that I was going to start reviewing the current series of Doctor Who in this blog, but I never got started, in the fear that I'd annoy some of you. Then I was going to revive my LiveJournal, because a lot of Doctor Who fan activity takes place on LJ; but I didn't do that, either. The truth is, it's all too easy to write about Doctor Who on the Doctor Who Forum, where nearly everyone has a fairly comprehensive knowledge of the subject, and the rest have at least an interest in same. So it looks like the only times I'm going to stray into Doctor Who territory here at the Outpostare when my mania on the subject gets the better of me, and/or something about the show inspires me to write about something I hope will be of more general interest. 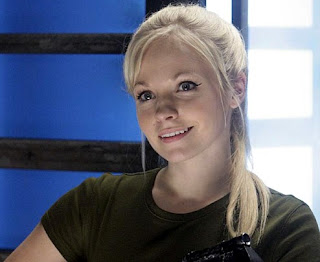 And so it is tonight, sort of. Saturday's episode of Doctor Who, which will air here in a couple of weeks, is called "The Doctor's Daughter," a provocative title if there ever was one. See, way back in 1963 when the show started, the Doctor (who looked like a grandfather back then) had a granddaughter named Susan. And yet in all these years since, there's barely been a mention of the generation in between them. A couple years ago the Doctor admitted that "I was a dad once," but there was no follow-up. So stating that the Doctor has a daughter, specifically, and then actually building an episode around her, is a huge change in the mythology and backstory of the series.

Except that it's not. I'm not going to give it away here, but Jenny's origin comes out in the first two minutes of the episode. She's not Susan's mom. And she's not a clone, either, for all that fans keep calling her that, because it's easier than explaining it properly.

Anyway, the reason I mention all this, aside from the fact that I have not much else to say at the moment, is that I'm wondering how people feel these days about the dynamics of storytelling on long-running tv series. Back in the days of Captain Kirk and The Fugitive and so on, nothing ever happened that was referenced the following week. Kirk could fall in love, only to see her die, and the next week you would see no change in his character. This was all so that they could be rerun out of order and it wouldn't matter, and also because in pre-VCR days you couldn't go back and watch the earlier episode on your own. American primetime of the 1960s and 1970s was all series, not serials. The Simpsons, that quintessential mocker of popular culture, has had a lot of fun with the convention over the years, with characters remarking on the fact that Mr. Burns always forgets who Homer is in between episodes, and Krusty doesn't seem to realize how much impact Bart has had on his life.

Somewhere along the line, though, it all started to change. Quantum Leap (1989-1993) didn't exactly build from one episode to the next, but early on Sam had a voiceover that often referenced past episodes, and bits of backstory, such as Sam having a brother who died in Vietnam, were retained and developed in later stories. Buffy the Vampire Slayer (1997-2003) always had a season arc, with a "Big Bad" pushing Buffy through an ongoing, season-long story. Nowadays, shows like Medium and House take it for granted that there is an ongoing serial involved, not just the problem of the week.

Meanwhile, there's Doctor Who, which comes from a very different television tradition. I don't know whether it was the normal way of doing things all those years ago, but Doctor Who in the 1960s through 1980s was a series of serials. A single story would be told over the course of three to seven episodes, occasionally even more. Characters would enter the show, stick around for a year or two, and then leave to get killed or get married or get a planet back on its feet. But other than that, not too much used to carry over from one story to the next.

In modern Doctor Who, there's a season arc, but it's almost subliminal, and you don't quite know what it is until the end of the season's series. But it's there, ticking away in the background, and meanwhile the shows fit together in a certain order. It's not as obvious as, say, House, where each week depends on what happened last week. Still, we know where we are in the story, who is in the TARDIS at the moment, and what mysteries we have yet to solve.

My question to you this morning, as I head off to bed, is whether you regard all this week to week continuity as a step forward in tv storytelling, or a problem, or something that works only if it's not taken too far. See, I have no intention of ever watching Lost, for example. Aside from the fact that neither the premise nor the characters appealed to me when I overheard the show being watched by John in the next room, I don't want to put in the effort of learning the backstory. I imagine people feel that way about Doctor Who also, and Buffy, and any number of other continuity-heavy shows. And yet I absolutely love the unfolding of backstory in shows that I care about. 'Tis a puzzlement.

How about you? Do you prefer shows where nothing much changes for the characters from week to week, or do you want to see how each story affects the characters over time?

Email ThisBlogThis!Share to TwitterShare to FacebookShare to Pinterest
Labels: Doctor Who, Television

I like the idea of characters changing over time because that's what people do. I was always most bothered by the "bubble" episodes in Star Trek in particular where the writers went to great trouble to put everything back to where it was. When done occasionally, I don't mind, but some shows do it to the point where I feel cheated.

I like to see some change in the characters over time. Even Lost has had that to an extent. If the characters never changed, or the story never moved forward, It would be a daytime soap opera. Nothing happens on those.

I really prefer the more modern approach to TV-series storytelling, and even some of the more progressive comedies use elements of it now too. An overall story arc, or several shorter-term ones over a season, provides a context, and I like seeing growth and development in the characters. I'd want that in a book or a movie, so why not on TV too?

I love Lost, but if I hadn't been watching since the beginning I doubt I'd start. I think the show runners know where they're going, and it eventually rewards patient and attentive viewing, but it's hard enough to keep track of even if you have been watching the whole time!

But then again, nine seasons of "no hugging, no learning" worked for Seinfeld.

Ah story arc. Tis a double edged sword, IMO. I love seeing my fav characters get into and out of situations that last more than just 40 minutes. Then again, they take my fav characters, get them into a HEAP of trouble, and then cancel the series. AAAARRRRRGH! Man I hate to be left hanging. [mumbles to self...why did he let everyone think he was dead? What's going to happen with Delinda's baby? What about the wedding?!]

Oh...and can we talk about "Donna" please? Most of the time I find myself totally annoyed with her character. Then she does something that moves me. Even so, she just seems too...I don't know...stupid? No. She lacks something. I just don't get why the Doctor took her with him.

I like the characters to grow and change in the storyline, but since I don't watch every episode -- I'm not a TV viewer -- sometimes I get soooo confused. Like tonight I watched Moonlight -- it looks very interesting but it kept referring to things that went before. I think I'll stick with books.