New Monday Shoot #21: show us something that can be considered "special." It can be a special occasion such as a birthday or anniversary, a special outfit you only wear to parties or job interviews, a special soap you can only get at that store across town, or a special meal you make for your kids when they're sick (or bring home a great report card). Celebrate the specialness with a photo or two! And yes, you can dip into your archives for this one, and show us something special that happened weeks, months or years ago.

Today is my 29th wedding anniversary, but I have no photos to show you yet in relation to that. It doesn't matter, because yesterday, Sunday, May 18th, was the birthday of a friend of mine: 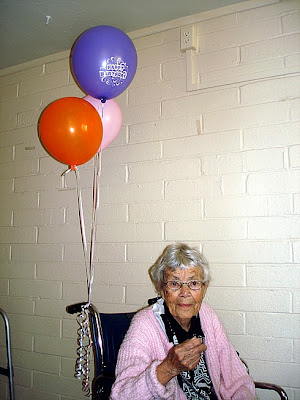 It's Eva! My oldest friend (literally, but not in terms of years known) just turned 103 years old. My friend Kevin and I spent two hours visiting her today. Her room was filled with flowers and balloons and other tokens of affection, but none of her relatives were there yet. Most of them live in California or Seattle, and probably aren't coming down this year. Even some of the Tucson relatives, she told us, are in Mexico (perhaps she meant New Mexico) at a soccer tournament instead. 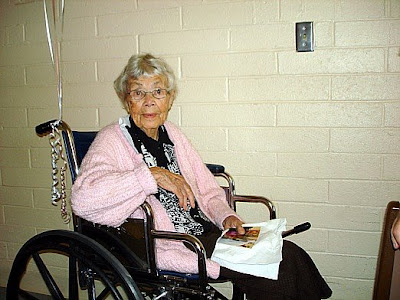 At 103, Eva can still walk, as long as it's not too far, and still carry on an intelligent conversation. In fact, she is ornery enough to fight for her own rights and the rights of others if she thinks people are being neglected or mistreated. Her vision is not so good, but she can still read large print, and she enjoys watching baseball and basketball on tv. She reports that the nurses where she is living now like the effect she has on her fellow residents, cheering them up and calming them down with her lively chatter. Hooray for Eva! I wish I were related to her; I'd love to have her genes. But I'll settle for my Dad's - he's as active at 85 as most folks are at 65, and that's nothing to sneeze at!

Your turn! Show us that special something, that special person, that special time, that special anything. As always, you have until Sunday night, when I'll post a special roundup of your entries. Be sure to leave a link back here in your journal or blog entry, and a link to your entry in the comments thread below. Thanks, and have fun, celebrating your own special example of specialness!

Happy Anniversary to you and John... and Happy Birthday to Eva!

Happy anniversary! Here's some confetti for you!
http://www.barrettmanor.com/julie/archive.aspx?ID=2133

Oh it's Eva again, I think she's wonderfula and I admire her so much :-)
I will do my very best to make it back for this shoot.

Shoot, I forgot to add, Happy Anniversary and Happy Birthday to Eva!

Happy belated birthday to Eva, I hope I can grow up to be like her, she is an amazing person. I am glad she had you and Kevin to visit with on her birthday.
Happy Happy Anniversary to you and John, I wish you many more happy years together.
Barbara (Beckerb6@aol.com)

Happy 29th anniversary Karen and hubby! mine is just next Monday, so I cannot wait for that special day photograph, let's see what I have in my archives. My niece just celebrated her birthday last week, maybe I can use one of the photos...