The End of the Monday Photo Shoot? (Chores) 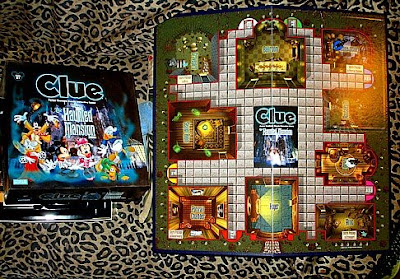 Last week, in an attempt to make the Monday Photo Shoot topic a fun and easy one, I asked for pictures of any kind of game. Although several people enjoyed seeing my board games based on bad sf tv of the 1970s, only Martha actually took a picture of her own for the MPS, of a Spongebob edition of The Game of Life. I'm grateful that Martha took the time, because she has other demands on her life at the moment.

As you might imagine, it bums me out that this particular Monday Photo Shoot bombed so completely, but it's not a huge surprise. Since I took it over from John Scalzi at the beginning of 2008, it hasn't had nearly the level of participation that the Weekend Assignment and the Round Robin Photo Challenges get. And actually, even Scalzi himself wasn't getting great participation on the Monday Photo Shoot by late 2007. The reason why seems fairly obvious. When Scalzi started it in 2005, there weren't a lot of photoblogging memes making the rounds. Now there are, and the Monday Photo Shoot, based as it is on a three year tradition and one C-list blogger's weekly ideas, can't compete with better established shoots.

At this point, I figure I have four choices:

1. I can give up on it, and find something else to do on Sunday nights.

2. I can embark on a publicity campaign, reminding people about the Monday Photo Shoot and begging for entries.

3. I can do it anyway, and if there are no entries, then I make do without them.

4. I can ask you folks whether you think it's time to drop the meme, and ask you to post an entry if you want it to continue.

I'm not going to do #2. At least, I don't think I am. It forces me to confront a major phobia of mine about contacting people uninvited, and asking them to do things for me. Really, I'd rather not. #1 is probably where I'm headed, although I might dabble with #3, and post photos on my own even if it's not a meme any more. But I'm going to try #4 first.

So. One last try:

New Monday Photo Shoot #20: You're busy. I'm busy. Everyone's busy. (Well, almost everyone.) Show us a photo the represents one of the demands upon your time. 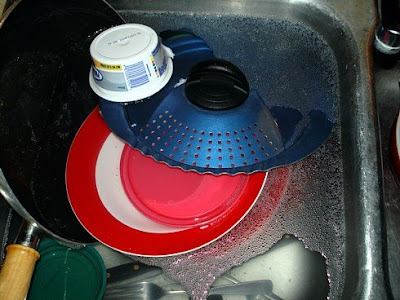 Yes, like everyone else, I have dishes to do. But first I'm going to have fun with the photo of them, using ArcSoft PhotoStudio: 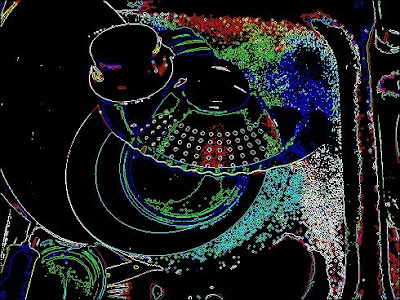 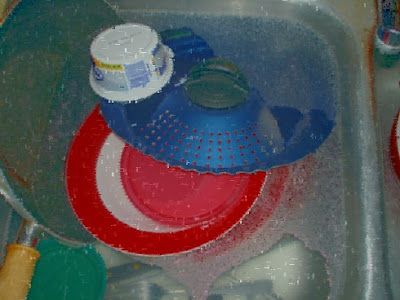 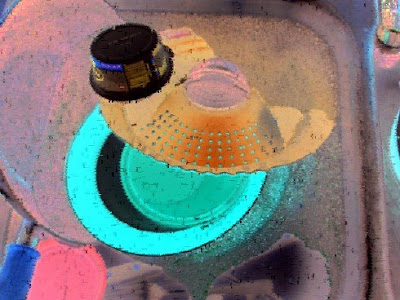 Wet brush and negative
Your turn! Post a picture of something you need to get done, along with a link back here. Then post a link to your entry in the comments below. Please be sure to say in the comments whether you honestly think it's time for me to give up on the MPS. Then on Sunday night/Monday morning a week from now, I'll post the results, and my decision on whether to continue the meme. Fair enough? Meanwhile, have a great week!

hey Karen.. a thought about the photo part of aol journals.. many people have been doing this a number of years and using many photo's.. I don't know about others but my space for photo's at aol file manager is darn near filled! I don't know what i will do soon when i can no longer upload photo's.. the "aol pictures (my album)" has space but no photo comes onto the blog larger than 250 pixels wide instead of nearly 400. there seems to be no way to have a larger than 250 pixel photo on your journal once file manager is filled!

As you know, I have always encouraged you to stick with it. There will be slow weeks, especially as we get closer to summer, but if you decide that you don't want to continue with the MPS please send it my way. I will take it in a give it a home. By the way, I did some photos of games, but Elvis and Alan and a long weekend got in my way. Skippo and Quiddler are my games of choice.

Maybe we could experiment with me kind of co-hosting your shoot on AOL? I know lots of AOL people just don't go outside the AOL journals for some reason. I could just copy and paste your entry and let J-Lander's know they have the option of leaving their link on your journal or on mine. You could pull the links off my comments Sunday night and then I could copy and paste the linking list to post too. It's just a thought. Maybe we could try it as an experiment and just see what happens -- only thing is, I probably couldn't get started until the first Monday in June. Let me know your thoughts on it and of course I'll try to be back for this week's shoot if at all possible! :-)

Sorry for not participating in last week challenge, Karen. Somehow it just slipped my mind!'anyway this week's challenge is done!


I didn't realize that this challenge has been going on for so long, since I just stumble on this a few months ago and have been enjoying it so much.Hope you will still keep this alive.

These things tend to ebb and flow. Hang in there.

Have you thought about starting a Monday Photo Shoot group on Flickr and/or Zooomr? People who host their pictures on Flickr can send them to the group pool. It's a pretty easy way to get a little PR going.

I shot something yesterday, but didn't get around to processing and posting until today.

My mom and I played "Are You Smarter Than a Fifth Grader" (we aren't) and I even thought to take a picture but had left my camera in my car. I do enjoy the photo shoots - even if I don't do manage to post or take pictures, having a photographic goal makes me look around for new things to shoot during the week.

I have a license plate blog, but this is the only other photo blogging I do, so I'd love to keep it up...

Weekly photo memes are tough for me. I get hung up shooting stuff and then a scramble to come up with a photo to fit theme. I'm getting more and more settled so I could be able to focus on Mondays once again.

Purely for nostalgia sake, I'd hate to see it die. But even with the extra incentive of my new camera, I've been finding my time to read blogs getting less and less. I don't see the photo shoot posts on time. I'm too tired to find something to shoot. yadda yadda fill in more excuses. I'll try to be better, just because I don't want the option to participate to go away.

The only time I missed, everyone misses. Drat. I have an excuse, my lens is getting fixed or I really would have participated honest. Please give it another try. I'm getting my lens back on Friday!

I did the MPS this week. It can be found here...

Talk about last minute!! Hope I made it in time...

I am definitely late. mea culpa. But it's here:
Kiva
The Eclectic Granny
http://eclecticgranny.blogspot.com