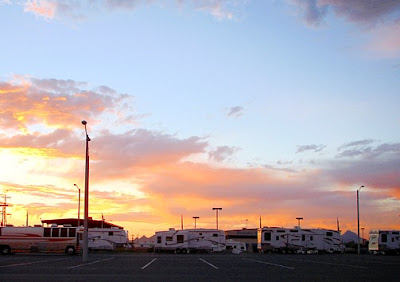 Motorhomes at sunset, November 2007
I may as well mention, now that it doesn't really matter, that the company that's laying me off this Friday sells motorhomes and travel trailers. That's a problem, given current economic conditions. How many people are looking for a vehicle that costs anywhere from $80,000 to over $1,000,000 and gets 8 to 14 miles per gallon of diesel, now that diesel is over $4.00 a gallon and rising? As with First Magnus, I find myself cast adrift due to the unfortunate circumstance of working in the wrong industry at the wrong time. All I can do in the present case is move on, and wish my soon-to-be-former company and colleagues well. (If you're in the market for a motorhome yourself, don't let me discourage you!)

I'm having mixed feelings about this Friday and beyond. Economically, of course, it will be best if I somehow manage to get hired by someone before the week is out, and report to my new job on Monday. Getting hired right away would also feed my ego, frankly. Last summer I was out of work only eight days after the collapse of First Magnus, and had no gap at all between my temp job at Anonymous Regional Retailer and what was meant to be a long-term job at Famous Vehicle Dealer. I ended up feeling pretty good about myself from a professional standpoint; arrogant, even.

But the economy was in better shape then, and I'm running out of time to get a job with no gap at all. And that's where the mixed feelings come in. Money and ego aside, I'd love to have a little time off about now. It would be great to sleep in, luxuriate in bed, and try to set myself to doing other long-neglected activities, such as sorting through boxes, holding yard sales, and getting serious again about the fiction writing. I figure two weeks would be enough to switch gears and start doing these things. Maybe once I got started, I would even continue, to a lesser degree, once the new job materializes.

Still, it would be a hardship to be out of work that long, so I'm plugging away at getting something going. My recruiter is chatting me up to a couple of companies, I applied for a job last night online, and today I left a message with someone who expressed an interest last fall, right after I started my current job. I may yet manage to click with someone sooner rather than later.

But if not, I look forward to sleeping in for a few days.

So in a way, I suppose, I identify with Russell T Davies, who is about to step down as the executive producer and showrunner of Doctor Who. He's been in charge of the show since well before it came back on tv in 2005. He's written 26 episodes of the show, plus an episode each of the two spinoffs, Torchwood and The Sarah Jane Adventures (the latter with Gareth Roberts), and designed the overall story arc, themes and individual story premises of nearly everyone else's Doctor Who episodes.

I really admire his vision and productivity; maybe someday I will be a tenth as productive with the novels. But what I mean is, after five years or so of working flat out, he's finally going to take a bit of a break, producing just four Doctor Who specials in 2009 before handing the show off to the new showrunner, the brilliant Steven Moffat. In praising Moffat when the handover was announced today, Davies added, "Best of all, I get to be a viewer again, watching on a Saturday night!" I can understand the idea of his finally getting a chance to take a little time away from the stress of this grand endeavor he's been working on all this time, and enjoy other parts of life that inevitably fall by the wayside when you're really busy for a really lomg time.

Still, I'll be surprised if he isn't back writing and producing something new, before 2009 is out. Perhaps he'll move to Manchester, where erstwhile Doctor Who producer Phil Collinson is setting up shop as the new BBC drama head for the region.

And whether I'm out of work for a day, a week or longer, I intend to enjoy my downtime - and then latch on, I hope, to a new job that I truly enjoy. Unlike RTD and Doctor Who, I haven't exactly had my dream job this time around. In fact, with the temperature in my office climbing into the eighties today and more hot weather ahead, I'm getting out just in time.

Email ThisBlogThis!Share to TwitterShare to FacebookShare to Pinterest
Labels: Doctor Who, Jobs, Personal

Good luck in your job search, Karen. Hopefully something better will comes soon.