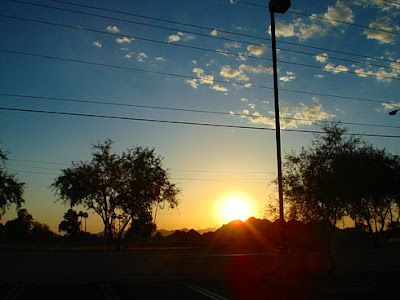 Sun good, tree meh
As is so often the case on the night after I post my Round Robin entry, this is a followup to that - except that this one is also a followup on my previous posting, the Weekend Assignment. I think I've used the subject line before, and I may even have seen Carly quoting it today (it's from Buffy the Vampire Slayer). But it's too perfect not to use it tonight as well.

Here is the context of the original quote. Buffy and her friends have just defeated the evil mayor of Sunnyvale after he changed into a giant demon snake. They've also seen their odious principal eaten by said snake, lost some of their fellow classmates to a vampire attack, lost Buffy's vampire boyfriend to an attack of angst, and, oh, yeah, blown up their high school on the very day they graduated from it. After the graduation, battle and mass destruction, Buffy says,

Buffy: "I haven't processed everything yet. My brain isn't really functioning on the higher levels. It's pretty much: fire bad; tree pretty."

As her Watcher, Giles, muses on what happened, he quickly gets a bit too esoteric for Buffy in her current state of mind:

Giles: "There is a certain dramatic irony that's attached to all this. A synchronicity that borders on…on predestination, one might say."
Buffy (firmly): "Fire bad; tree pretty."

I'm not sure I've ever gotten to a "fire bad, tree pretty" state of mind, and the fact that Buffy can explain what she means by it is proof that she's not quite there, either. But I'm eternally fascinated by concepts like this, the idea of a human being reacting on an instinctive level, with little or no rational thought. Exploring what such a mode of thought might be like is a big part of my characterization of feral tengremen in the Mâvarin books.

Although I doubt I'll ever manage to "Turn off your mind, relax and float downstream," as John Lennon described meditation (or possibly drugs, or both) in Tomorrow Never Knows, I've certainly reached a level of sleepiness or exhaustion that resulted in other interesting effects. Last night I was up on my usual Friday all-nighter, knowing that I could then go to bed and sleep well into the afternoon. (Or so I thought.*) By the time I got my Round Robin entry posted, it was later than I'd planned, and I'm afraid my sleepiness at that point was evident in the quality of the entry. The photos were okay, but the text was a bit sketchy, and full of the sorts of typos a spellchecker will never find; wrong words, mostly. It's fixed now, and fleshed out a bit. If you looked at the entry early in the day on Saturday I hope you'll glance over it again. 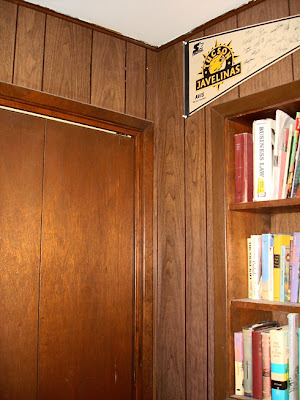 The closet doesn't quite match the paneling
Meanwhile, the postings and comments of others over the last day or so have me considering further the subjects of my last two entries. It occurs to me that although our house is mostly brick on the outside, there is plenty of wood inside, especially in my office. I like the faux walnut paneling on the west side of my office, and the real (albeit hollow) wood of the closet doors in here. 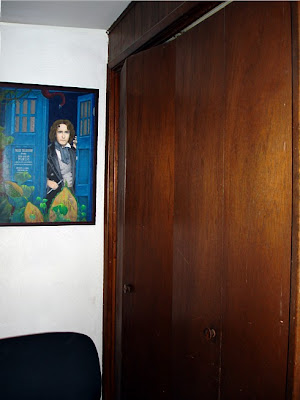 Doctor Who appears in several places in the MotW.
They're not great as functioning closet doors, though. Since they fold outward, there isn't much room to work with them. 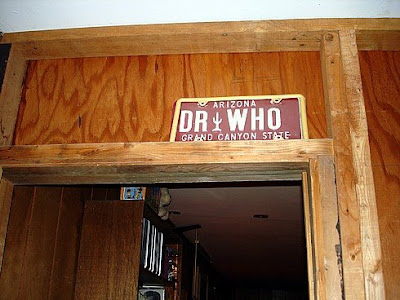 And if you look on the other side of this room, you'll see that it was never finished. The north side of it is all studs and plywood, with no plaster or paneling or anything like that. But hey, it's wood! Here is a partial answer to a question of Bea's, about whether the Museum of the Weird is all cleaned up and renovated and pretty now. Well, no. It's a mess, and very little renovation or repair has actually been completed. I simply decline to show you the place at its worst, so much so that I routinely clean up carpet and stains digitally in my photos when I should probably be trying to do that in the real world instead. 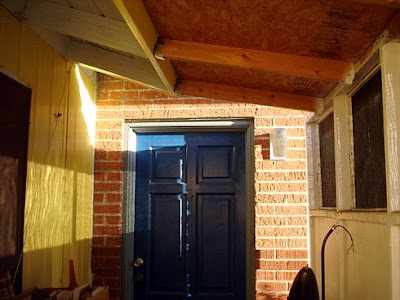 Here's an example. If I were to show you the vertically-oriented shot that goes with the one above, you would see an old lamp, leftover wood, and boxes full of junk I'm supposed to sort through. This shot is also an answer to Kiva's idea that you can find the Museum of the Weird by watching for a TARDIS-colored door. It won't work; the yellow alcove-thing John built years ago keeps the door hidden away. 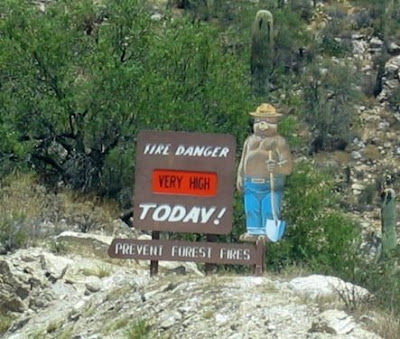 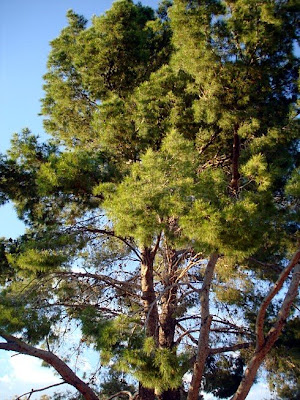 Tree pretty.
Interestingly, some of the Round Robin posts by others had implications for my thoughts on the subject of Fire, this week's Weekend Assignment topic. Gattina posted a shot of a burned out forest, and people said in comments that it was a shame the forest had burnt. But I was reading a few nights ago about the function of fire in keeping an ecosystem healthy. Here in Tucson, the Santa Catalina Mountains have one fire policy, which the Rincons have another, in part because Mount Lemmon is inhabited and has roads in it, while the Rincons aren't and don't. Both ranges are subject to wildfires, but the ones on Mount Lemmon are more frequent and more devastating. They do controlled burns on the Rincons, which burn away the kinds of grasses and such that help to fuel the wildfires. And the USFS or whatever can choose when the burn takes place, so the conditions are right for it to burn, bt not too much. But they don't dare to do that sort of thing on most of Mount Lemmon, because they can't take a chance on starting a fire that will spread to people's homes and businesses. Result: the Aspen Fire of 2003, a wildfire that took out 300 homes anyway. And artificially keeping fire away robs the land of the germination of certain kinds of seeds, and the process of succession, in which the land goes through a series of stages in the growth and varieties of plants as it progresses from grasses and shrubs to mature forest. In some ways and at certain times, fires can be a good thing. It will be interesting to see whether anyone tackles the Weekend Assignment in that light.

*I'd forgotten about the Democratic Party, which wakes me up nearly every week with phone calls asking for money. I was rather rude to the Obama fundraiser this morning.

Email ThisBlogThis!Share to TwitterShare to FacebookShare to Pinterest
Labels: Fire, Museum of the Weird, Plants, Round Robin Photo, Weekend Assignment

that is some selection of wood!!!
Ü
Marie