The End is Only the Beginning

Napping on a Friday Night

I just got up from a five and a half hour "nap," from 9 PM to a little past 2:30 AM. What makes that a nap? Simple. I hadn't blogged yet. The day doesn't officially end until I write a blog entry, even if that happens at 5:30 on a Saturday morning. The nap means I'm a bit better rested when I write it, and I can still go to bed until 3 PM if I need it, allergies permitting. (Cue the allergies, right on time!)

There was a scientist on the radio show Science Friday this week (imagine that!) who talked about a secondary biological clock that resets depending on when you eat. The main one is keyed to periods of daylight and darkness, but the second one seems designed to make sure you're awake well before the time you last got food after a fast, in case that helps ensure that the animal gets to eat. Maybe that's why the dogs are bugging John for breakfast as I type this - they're used to getting fed between 4 AM and 5 AM, from when he was going to the gym before work.

Obviously this has potential implications for my own wonky sleep schedule. I'll have to experiment. This period of joblessness seems like a great opportunity to try to reset my own internal clock, and put an end to the sleep deprivation before I incur long-term damage from it.

The End of a Rather Short "Era"

In the trunk of my car right now are a Doctor Who poster, a calendar of 1950s travel posters, two half-empty boxes of tea, a bone china sea lion, a five inch long plush cat (achoo!), a small stack of paperwork related to temping and veterinary bills, sugar free gum, my plastic Zorro and darn little else from my eight months working for Famous Vehicle Dealer. On my last day, a number of people said they were sorry I was going, wished me luck, and asked me to stay in touch. One person helped me get my stuff out to the car in just one trip. Another caught the fact that I'd missed taking down the poster and the calendar and helped me take care of the oversight. Considering I lost some stuff forever packing up from First Magnus, I'm grateful. I'm grateful to all of them.

John intends to work some serious paid overtime for now to supplement our income. There's apparently enough work to be done to justify this, but I hate to see him do that. He likes the job, but it gets boring for him, and it's a long commute.

Meanwhile, I figure I've got three jobs to do, all of them unpaid for the moment, but all with potential money at the end of them: 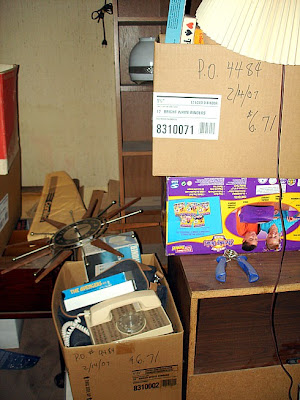 Meanwhile, on Another Planet...

There's a guy here in Tucson named Peter Smith, of the University of Arizona's Lunar and Planetary Laboratory. I never heard of him until this week, but he's in charge of the Phoenix Mars Lander, which is attempting to land on the polar ice cap region of Mars this weekend to test for "habitable" water capable of sustaining life. He was all over NPR and Tucson Weekly today, explaining the mission, and why the period of the spacecraft's final descent and landing is called "seven minutes of terror." Seriously. Google that phrase, and it's all about the lander. 'Cause the thing is, it's not so easy to land on Mars. by Virginia Hughes and Alejandra Garcia of NPR count 39 missions to Mars, more than half of which have failed, including one that Smith was involved with in 1999 (not his fault; he worked on the camera for it).

Apparently the landing bit is the hardest part. Recent successful missions did kind of a bouncy landing thing, but the Phoenix Mars Lander, so-called because it was salvaged and rebuilt from a craft intended for a bureaucratically scrubbed past mission, is doing the parachute and thrusters thing. Nobody's managed to make that work since the 1976 Viking missions.

If Smith and his lander to buck those odds, there may be exciting discoveries ahead about whether Mars could support life. Meanwhile there are a number of Mars-centric events going on in Tucson this weekend. I may bestir myself to check out one of them. Either way, I wish Peter Smith and his team all success.