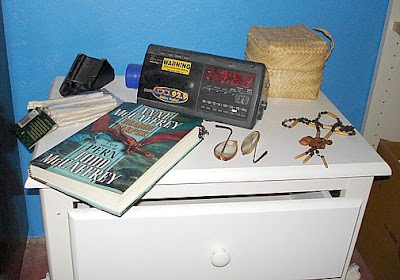 Just a short post tonight, at the end of a long day of sleeping and reading, grocery shopping and a brief trip to the mall. Why the mall? The Lenscrafters there has my optometry records. The reason that's important can be seen in the photo above. Friday night, a few hours after I presumably joined the ranks of the uninsured, the bridge of my three-year-old glasses spontaneously broke in half. Honestly. All I did was take my glasses off. There was no resistance involved, and darn little gravity. The glasses have been falling off my face for months, though, so I knew they weren't exactly in great shape.

My 2005 prescription was written with a one-year expiration date, so I have an appointment for a new exam on Monday. I have very bad myopia, so I'm at high risk for a detached retina and stuff like that, although I'm sure I'm fine in that respect. Meanwhile I'm wearing the only old glasses I could find. I figure they're a minimum of six years old, possibly a decade. 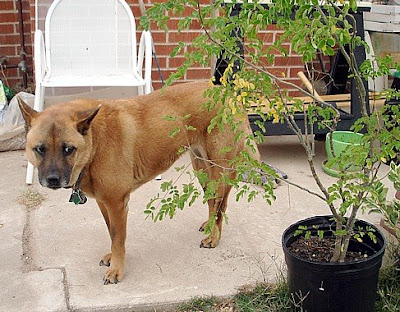 What's the other disaster? We don't know for sure what's going on, but the past week Tuffy has seemed awfully frail - head down, moving slowly, no enthusiasm and very little hanging out with us. John and I both think we're coming down to the end with her. She has a scheduled appointment for mid-June, and we're trying to decide whether to make it sooner. Poor Tuff. John touched her snoot the other day and she yelped and ran away. And yet she still eats cheese and dog biscuits, so her appetite is actually pretty good.

There has been so much bad news on so many of my regular blog reads lately. And I haven't been fit company for anyone myself...which makes me a terrible commenter. All I can say is, I'm thinking about you and hoping positive things.

Poor Tuffy! If her head is down and she's moving slowly, yes, someting is wrong. My Misty was acting that way on Thursday. I took her to the vet and had to drop her off, which was pretty hard to do after losing Max back in March. I dropped him off, and less than an hour later, he was gone. But I had to drop her off so I could get to school on time. I left instructions that xrays could be taken and blood drawn (I was worried about her liver). Xrays showed vertebrae spurs. She's on anti-inflammatory now, steroidal. She seems okay now. At 13, I'm not expecting too many years out of her. I just want her to be comfortable. I know you want the same for Tuffy. My vet said that as long as her quality of life is good, I should try to keep her alive. But that if she wasn't happy with us due to being in pain, it would be time to put her down. I'm ready to make that decision. So I keep my eye on her. I hope Tuffy is not in pain. bea