Am I Wrong? (Plus Dog Pictures)

I've been a bit depressed all afternoon and evening over something that happened earlier today. I've done my best to treat my depression with a light snack and copious amounts of Doctor Who; I guess I feel a little better. Let me tell you about it.

Since September 2007, I've been making what would have multiplied out to $XY,0000 a year, had I managed to stay there a year. This was, I think, $1,000 more than I was making at First Magnus. I never bothered to divide that out and see how much an hour it was, and when a recruiter asked me a month ago whether I'd accept $1Y.00 an hour on a temporary basis, I kind of felt pressured to say yes. I later did the math and discovered that that was too little money. I called the guy back and told him how much I'm making now. I meant to imply that I want the equivalent of $XY,0000 a year if at all possible, but the lower $1Y.00 an hour stayed in my record at that particular recruiter's company.

Today my main recruiter called to set up a job interview for me tomorrow morning, at a local non-profit agency. I was pleased and relieved and excited until she said that they wanted to pay me a dollar less than the $1Y.00 an hour, but that she'd convinced them to try to come up with the extra dollar an hour to get me. I was a little shocked, but I agreed to the interview. Then I did the math. That's still almost $2.00 an hour less than I've been making. She told them I wanted to work my way toward eventually making the amount I've been making. They thought it over, and canceled the interview, saying that I wouldn't "be happy" there. My recruiter called me back and gave me the bad news. She sounded disappointed in me.

When I got home tonight, I read the recruiter's email, written before the interview was canceled. It said, in part,

To be honest with you, the job market is really tight right now and this is a good in with a good company. The only other jobs I'm placing right row are [several things that aren't even possibilities]. As you can see - it's slim pickings so I would definitely try and nail this position!!

John, of course, is on the opposite side of the fence on this. He thinks it would be foolish of me to take a major cut in pay, especially this early in the process. He knows we've got my student loan, the mortgage, the credit card debt (much of it from Tuffy's cancer treatments), and rising expenses for gas and food. It would be tough on our budget to work for $1Y.00 an hour. So why do I feel so guilty and depressed and desperate? Plus there's this: if I'm out of work for a month, that's the difference in pay right there.

(I expect at this point you can probably work out the actual dollar values algebraically, if you care. Please don't bother.)

So I put it to you: am I wrong to hold out for at least the same salary as before, with the possible exception of a temp job while I wait for a better one? Would a temp job at $1Y.00 an hour get in the way of my making more later?

Enough of that. Let's look at pictures of dogs, in advance of Steven's Feline & Furball Friday. 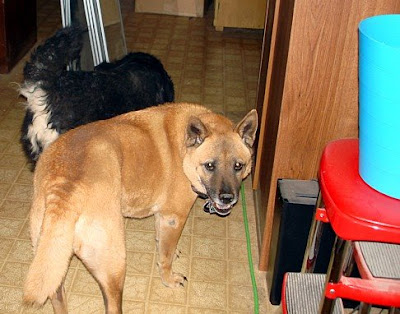 Y'know, somehow I think they're starting to take advantage of us. I could have sworn that when it was just Tuffy, the treat was only due when we came home from work. 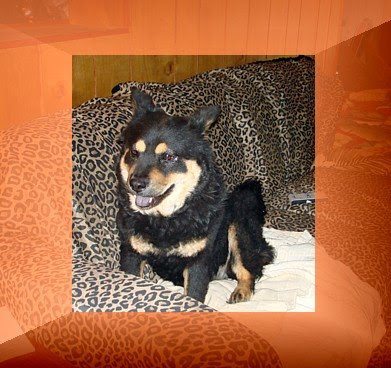 Yep, Pepper is a demanding little dog! But so cute! Someday she may even deign to lick me. 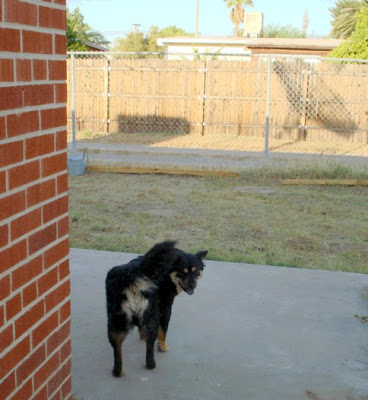 She does seem to be glad to see me, though. In fact, she hangs out with me a lot. And she's finally warming up to John, after a somewhat shaky start. 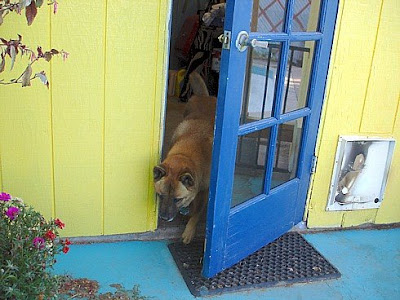 Wherever one dog goes, the other dog has to go too, to make sure of not missing out. This is especially true of trips to the back yard, or in from the back yard.

Treats: Something dogs and cats definitely have in common. Abby and Midnight know that treat time is whenever Paul gets home from work, and they'll wait at the patio door, watching for him to come home. I put out a bit of kitty milk in the morning, and get "told" if I forget.

Recruiters are not doing this for your benefit. They get paid for any job that they recruit you for. It is in their benefit to tell you that you need to accept the job they sent you for. Don't feel guilty if you turn down one of their jobs because you would be uncomfortable (for whatever reason) taking it. Usually when you take a job you don't like, you'll soon be on the market again.

Treats:
My dog tries to train me in giving her more treats. Sometimes I catch myself giving her treat just because she asks. These dogs are expert human manipulators.

I really wanted to give you advice but I didn't have a clue what advice to give you; also I was scard to give you totally wrongheaded advice. But now that I see Kiva's answer, I know 100% that's she's dead on.

I chuckled about the treats you give your dogs... when Max was with us, he always expected a treat when he came in from outside. He'd wait for it, wagging his tail. He'd also expect one when I gave one to Misty if she came in from outdoors, even though he had not been out. I usually gave both of them a treat when one of them walked in the door, just so I wouldn't leave anyone out. Sometimes he would act like he wanted out. I'd let him out, then seconds later, he'd scratch the door, come in, wagging his tail. He was trying to trick me into giving him another treat! Smart dog! Now, it's just Misty, and she doesn't expect a treat like Max. If she doesn't get one, she just walks away like it's no big deal. I give her half a treat. So treats are lasting a lot longer than they did when Max roamed our home. But I do miss him...