Dogs on the Grass, Look Out

The title of tonight's entry is from Thurber's commentary on Gertrude Stein's famous line, "Pigeons on the grass, alas." (I just found a fabulous mashup of the Thurber piece with Space Ghost, which aside from being funny gives you much of the text of the Thurber original.) Apparently Charlie Brown once sided with Thurber, remarking, "Beagles in the grass alas." 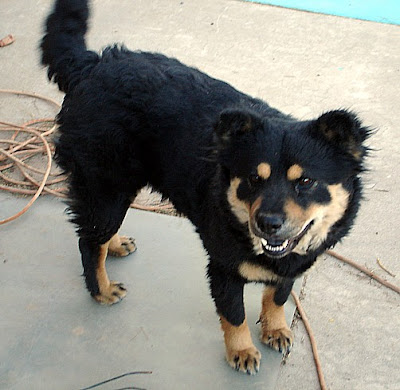 Pepper says hi.
I decree that after two text-intensive entries in a row, I'm entitled to a photo essay. I further declare that this is a one-day-early entry for Steven's Feline and Furball Friday, since my Friday morning entries are always the Weekend Assignment ones. 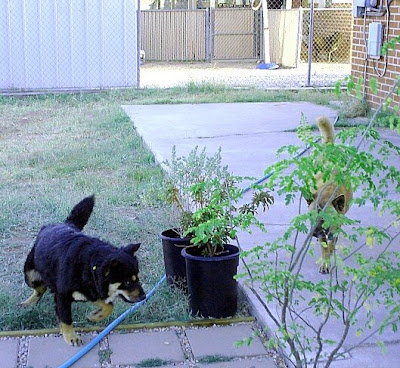 Object of curiosity, or just a buffer zone between dogs?
Besides, the dogs were being cute out in the yard this evening. Both were showing a certain amount of interest in the plants John's been bringing in as part of his Landscaping and Beautification Project (LaBP). 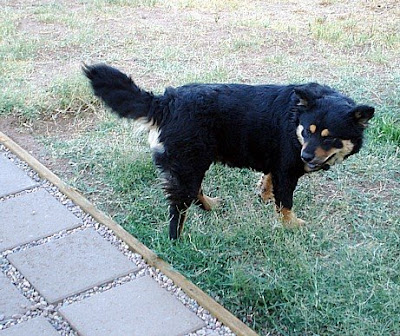 Where is the tastiest grass to be found?
Actually, Pepper is mostly interested in a) eating grass, and b) lying in the dirt. Tonight she ate a little bit of the grass between the slabs of John's new path to the back gate. John urged to to eat the rest of it, too. 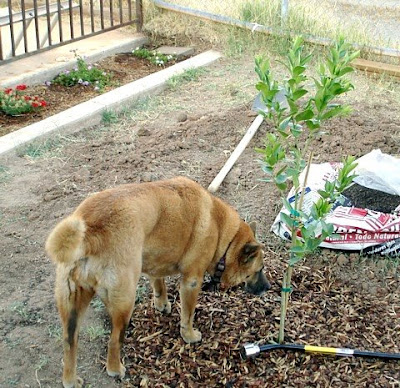 Possible site for the next buried dog biscuit
Meanwhile, Tuffy checked out the new tangerine tree, which John put in the ground a few days ago. 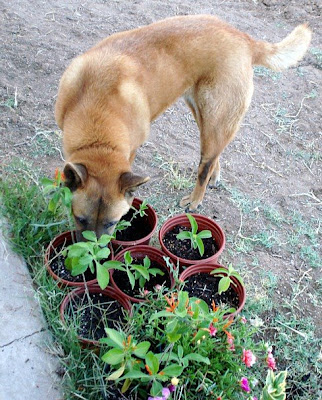 Sniff! Sniff! Sniff!
Then she investigated some of the stuff that has yet to be transplanted, including runners John took from the firecracker bush out front.

I'm behind on reading everyone's Weekend Assignment entries, but I'll get to them early Thursday evening. I promise!