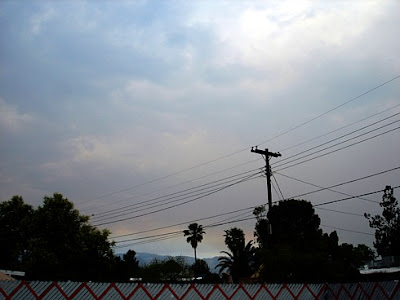 Clouds and smoke and dust fill the sky, May 15, 2008
A couple of minutes before I arrived home from work this evening, I became aware of the smell and tang of smoke in my nose and throat and lungs. There didn't seem to be anything wrong with the car, and looking around as I drove east on Golf Links, I couldn't see any fire. Nevertheless, there was obviously a fire going on somewhere. The sky was brownish gray, a combination of clouds, dust storm and smoke. 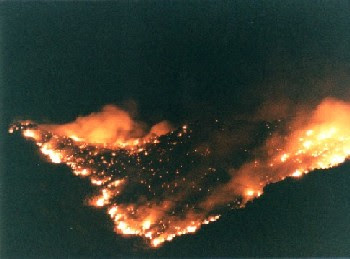 Fire on Mount Lemmon, circa 1986. Photo by JBlocher.
Usually when smoke hangs in the air over the city of Tucson, it's coming from a wildfire on Mount Lemmon. Occasionally it's from one of the other mountain ranges that ring the city, either the Rincons to the east or the Santa Ritas to the south, as seen below. But by daylight, looking through the nearly opaque sky, I couldn't find a fire. 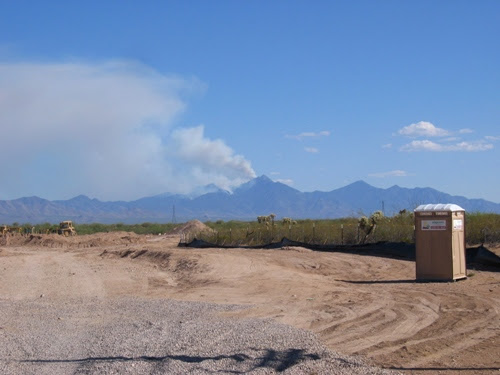 The "Florida" fire, Santa Rita mountains, 2005
Tonight on the news, though, they mentioned that the smoke was from a controlled burn, blown into the city by a strong wind. They stopped seeding the fire after a while, but hope to burn some more tomorrow, to stave off the devastation of wildfires and clear the way for the brush and plant life that provide habitat to some of the animal species that inhabit, well, whichever mountain they're burning. All of which makes for a longer-than-usual introduction to this week's Weekend Assignment:

Weekend Assignment #216: Tell us a story or anecdote that involves fire in some way. It can be a forest fire, a house fire, a campfire, logs in the fireplace, or even a lit match, a tale of comfort or destruction. Whatever comes to mind, if it's interesting and fire plays a role, we want to read about it!

Extra Credit: Is the area where you live subject to dangerous wildfires?

It was March 10th, 1979. Well, maybe. It was almost certainly 1979, it was definitely a Sunday, it was probably March, and I think it was on or near my birthday. I was engaged to John by then, and planning to visit him in Columbus, Ohio over spring break, which was imminent. I was still a student at Syracuse University, living in a rooming house on Westcott Street that had recently been condemned in a legal dispute between a judge, my ex-boyfriend, and the new landlord, a bit of a jerk who hadn't closed on the property yet.

About 7:30 AM, my young dog Jenny (AKA Princess Guinevere of Westcott Street) and a black Labrador puppy I had temporarily adopted, Wafer (short for Wayfarer), started barking, which woke me up. When I tried to get them to stop, my neighbor across the hall shouted, "Karen, get out! There's a fire!" I grabbed just enough clothing to manage in public, and not freeze in March weather - much. The ensemble consisted of a jacket over a nightgown. I think I had on flip-flops, and had just cut my foot on broken glass. I didn't even manage to find my glasses! I just got the puppies and got out. A fireman later retrieved my glasses for me.

It was odd to be standing, half-dressed, with my dad, my dogs and my neighbors outside that white wooden house in the child of a March morning in Syracuse, wondering whether I would lose my Beatles records and Harlan Ellison books to smoke and water damage. Fortunately, the fire was in a second floor apartment. Aside from a smoky smell, it never reached my little studio apartment at all. Lucky me!

Oh, and on the extra credit, yes, metro Tucson's mountain ranges have been through quite a few wildfires since we got here in 1986. And I can't help but wonder whether a windy day in May, when it hasn't rained here in weeks and weeks and the fire danger is at least "High" if not "Extreme," is the best timing for a controlled burn.

Your turn! Tell us about some fire or other. Write it up in your journal or blog, along with a link back here, and then leave a link to your entry in the comments below. As usual, I'll do a roundup of your entries a week from now. Go to it - but please, no dangerous experiments for the sake of the entry!

Good thing your dogs woke you up!

My tales of fire are up.

Here's my brief brush with fire.

I'm so glad you were okay - and the dogs - and the Beatles records and the Harlan Ellison! Thank goodness!

My entry is finished and ready to be read at...

My partially-recycled account of last October's Southern California wildfires is here. One thing that I didn't mention in it is that I've always been a bit scared of fire.

Today, I completed both my last assignment of the semester and the weekend assignment. What a day of accomplishments! :)

I am all fired up!