This is a picture of Jenny Dog in the back of our Dodge van in 1986, as we drove around looking for a place where it wasn't winter. That was part of a huge change in my life, the move from Columbus, Ohio to Tucson, Arizona. The hour being late and the explanation tedious, I will spare you the details of how I happened to think of this week's topic:

Weekend Assignment #214: Sooner or later, pretty much everyone makes one or more major changes in their lives, sometimes several at once. We leave home, go off to college, get married, get divorced, change jobs, change careers, have kids, move to another house or another state, etc., etc. These things can be very stressful, but we do them in the hope of being better off in some way. Tell us of one change you voluntarily made in your life at some point, that worked out really well.

Extra Credit: Tell us of a little tiny change that also went well! 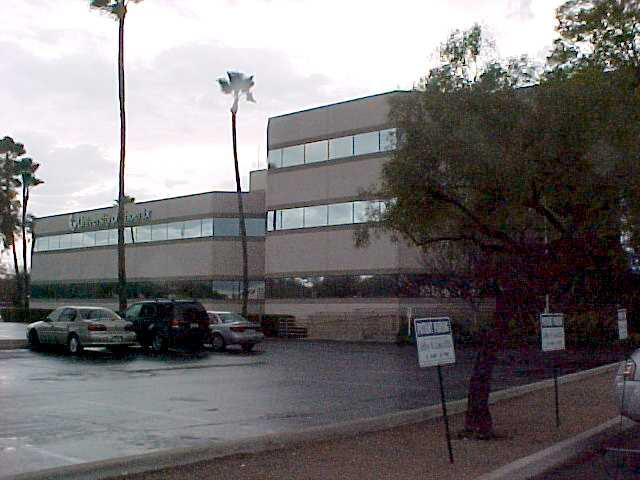 University of Phoenix Tucson campus, 2005, in the rain
There are lots of things I've done over the years that I'm really happy about now, others not so much. #1, I suppose, has to be finding John, but that was more a matter of luck and mutual feeling than actual choice. Moving to Arizona in 1986 was another biggie. But I think for the purposes of this assignment, I'll single out my decision in 2002 to go back to college, and turn my 30-year-old unfinished B.A. in English and Film into a B.S. in Business/Accounting. My mom lived just long enough to see me take my first class at the University of Phoenix; she died the day that class ended. My dad, a former college dean, attended my graduation a little over two years later. Along the way I got over my hangup about writing college papers, learned PowerPoint, discovered a strong interest in the law, gained confidence, assuaged my sense of guilt and failure, learned a lot about accounting, and became a heck of a lot more employable. I'm very grateful now that I did it.

And the extra credit? Well, I'm really happy with the metallic blue spaghetti pot I bought years ago. It's pretty, and oval shaped rather than round, and has a screw-on lid that works as a colander. I love to use it for steaming vegetables.

Your turn! Tell us of some change you made in your life that you're glad of now. Write it up in your blog or journal, with a link back here, and leave a link to your entry in the comments thread below. I'll be back in a week to direct everyone to this evidence of your courage and wisdom!

My Weekend Assignment can be found here...

Mine is done. you can find it here. Happy weekend everyone.

Great topic, and a concept I believe in - here's mine.

here's another tale of academic woe

My big change and the extra-credit little change are up at my blog.