LIFO and the Resume Game

"Be what you is and not what you is not! Folks that is what they is, is the happiest lot!"
--Mr. Wizard the Lizard, mentor to Tooter Turtle, circa 1960. 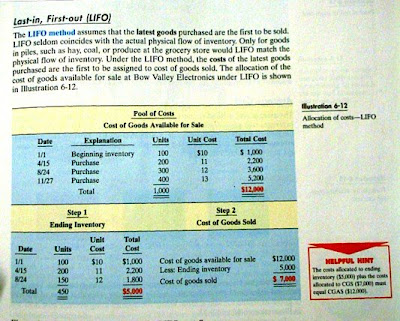 There's a concept in accounting called LIFO, which stands for Last In, First Out. It's the most popular method for determining COGS - Cost Of Goods Sold. The idea is this. Say you're a leading manufacturer and wholesaler of that most exemplary of products, the widget. In January it costs your company a dollar to make a widget, but in June, because of oil prices and such, it costs you $1.25. In December it costs $1.50, and at the end of the year you've sold 1,000 of them and have 1,000 left. So how much did the thousand you sold cost you, and how much is your remaining inventory worth? Under LIFO, the thousand you sold were the last ones you'd made at the time of each sale, so the ones you have left are more likely to have a cost of $1.00 than a cost of $1.50. Result: your inventory has a lower value on the books, and your COGS is higher than if you'd used the FIFO (First In, First Out) method.

But it occurs to me, as Julie said in a comment, that I'm on the receiving end of LIFO at this moment. I'm one of the September widgets, and since there weren't any made in December, I'm out the door before the $1.00 widgets that have been on the shelves longer. And laying people off by seniority, by LIFO, does make a certain amount of sense. The $1.00 widgets are the ones that have been around long enough to be part of the history of the company, part of the institutional memory. That shy accountant in the unheated office may do a fine job, but the people who have been working in their cubicles for years are more valuable to the company, because they know far more about how everything works, or doesn't.

So this widget spent the evening checking over her resume and updating her listing on five different job sites. Would you believe the monster.com had no Tucson listings at all for me? Good thing CareerBuilder has lots of them.

Just for fun, let's see what won't be on my resume:

Summary
Experienced widget with B.S./B. seeks to hang around with you for the next 20 years, but only if you're reasonably nice and pay pretty well.

If some prospective employer ever reads this entry, I hope he or she has a sense of humor!

I'm glad YOU have a sense of humor about it.

Also sending you a link of interest. Watch your inbox.

*snort* accounting humor...I love it. Hope you find something soon.

*snort* accounting humor...I love it. Hope you find something soon.

I have been lucky to have spent most of my accounting career in the nonprofit sector, where inventory accounting is not a major consideration - I have not had to think about LIFO in years.

Can I borrow some of your resume info for the next job-description writeup I have to do?

Monster never worked for me, I just got referred to a site called realmatch which is somekind of new technology. http://www.realmatch.com

LOL. My 2 cents: why not temp (now called "outsourcing")? I found it a good place to review the companies I might want to work for. If I didn't like the company, I could try somewhere else until I found a fit. I work for myself now, but I got some of my best clients through temping.