Good News (but not Wonderful News) 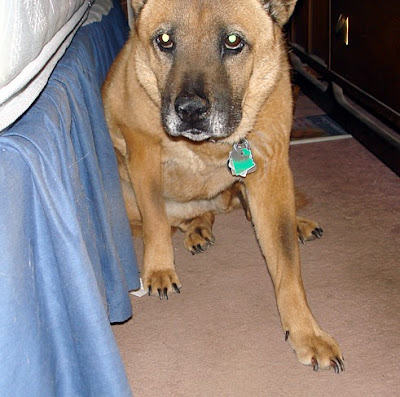 Tuffy, trying to hide between the bed and John's dresser.
The oncologist thinks that Tuffy has slipped a disc in her neck, which would explain her not wanting to raise or move her head. While she would not rule out metastasized cancer, she said she would expect Tuffy's breath to smell bad if the cancer were back. It doesn't, so there is hope on that front.

Unfortunately, the normal steps to take at this point would be an examination under anesthesia and some X-rays, which would quickly run into the hundreds of dollars. We explained about my current joblessness, so she suggested the same thing I was thinking about anyway: putting her on prednesone to see if it helps. I gave her one leftover 5 mg pill last night, and today she was noticeably better. Her new prescription is for 20 mg, and she has a return appointment a week from tomorrow. So we have our dog back for now. She's lost four pounds since March, and the pills should help with that as well, by stimulating her appetite.

John did attend the appointment at my request; I think we should be in on any major decisions together, with both of us there to ask the questions. He went back to work before I left.

When I came out of the exam room, paid and made another appointment, there were other people there, crying and getting ready to pay their bill. I didn't dare look around to see if they still have a pet with them, but I don't think they did. That added to the whole "dodged bullet" vibe of the afternoon.

I'd probably been home for 45 minutes when I found and checked my cell phone, which I mislaid shortly before leaveing for the vet's office. There was voicemail from a different recruiter! I called her back, and we discussed how I became an accountant, my work history, and my educational and career plans. I am meeting with her tomorrow afternoon. Before that I need to take some accounting tests online. I've done this before and done well, but I may stick my nose in a book or into a UoP online quiz just to make sure I'm fresh on stuff I haven't dealt with since school, such as, for example, LIFO!

Glad to hear the encouraging news.

And I'll keep my fingers crossed for your meeting tomorrow!

Here's to Tuffy improving! May she continue . . .

It was good to encouraging news.
Good luck with the new recruiter.
Barbara

Good luck on the job prospect! Glad to hear the better news about Tuffy.

I'm just catching up with everyone's blog after a very busy week. I'm so glad Tuffy is getting better and that you have a new recruiter!

Keep hoping for the best with Tuffy. I'm going through the same thoughts with my Misty... doctor says in time she will know more, but if she has liver cancer, we can't afford surgery... so the best my 13 year old dog can hope for is to not be in pain. I will do what I can to make her life comfortable, pain free... but as soon as her quality of life begins to deteriorate to an unacceptable level (by human standards looking at canine needs), we will have to make the final decision. I dread it. bea