Despite recent NPR stories about film critics losing their livelihoods due to all the user-generated content on Ain’t It Cool News, Rotten Tomatoes, Flixter, etc., I read something called "Our Snarky Summer Movie Preview" today in Tucson Weekly. Yes, they used the word "snarky" so that I don't have to (except that I just did). It was odd, too, because the prose style was extremely familiar, so much so that I suspect the guy reads Whatever. The whole piece read like a bionic recreation of John Scalzi, with the sarcasm turned up to 11 and the ability to appreciate anything or anybody turned down to about 2. All of which inspires this week’s Weekend Assignment:

Weekend Assignment #215: Review a film. Any film. Got something interesting to say about Edwin S. Porter's The Great Train Robbery (1903)? I'd love to read it. Metropolis (1927)? Why not? A Night in Casablanca (1946)? Fine. The Seventh Seal (1957)? Er, okay! Ferris Bueller's Day Off (1986)? You'll get away with it. Speed Racer (2008)? Go for it. From Hollywood to Ballywood to Hong Kong, from Kubrick to Kurasawa, it's all on the W.A. marquee. But there's one catch: the film should not be on your personal list of favorites; nor should it be a film you despise.

Extra Credit: Is there a film due out this summer that you plan to go see? If so, what is it?

As always, I'll start things off. And to make things interesting for myself, I'm going to watch something that happens to be on tv tonight.

The first film that turned up on cable when John relinquished the tv, other than the 1970s version of King Kong (I passed on that one), was A Knight's Tale (2001). starring Heath Ledger. I've always been mildly curious about this film, and it was starting instantly, so I went with it. 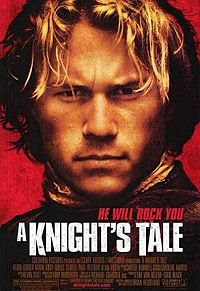 My first impression, though, was not particularly good. A squire, William, replaces his master the knight (Sir Ector) in a jousting tournament. Gee, where have I seen that one before? Oh, yeah. Goofy did it, in A Knight For a Day (1946), sitting in for Sir Loinsteak. For that matter, it's not far off The Prince and the Pauper. But okay, it's not a cliche; it's a trope. Modern Americans pretty much expect their royalty to be lowborn.

Hey, is that Alan Tudyk? Turns out that it is. Always good to see one of Joss Whedon's troupe. He plays Wat, one of William's friends. I keep hearing the name as Wart. It's not, but that would be appropriate. In The Sword in the Stone, young Arthur, nicknamed Wart, is raised by Sir Ector.

Onward to the tournament, where I am jarred and a bit shocked by the crowd chanting and beating out Queen's We Will Rock You. It's cute, though, and no worse an anachronism than the tanks and picture postcards in Jesus Christ Superstar. For that matter, Danny Kaye's The Court Jester isn't exactly true to the era depicted, nor is Bing Crosby's A Connecticut Yankee in King Arthur's Court. (In the latter case, however, that's a big part of the story!)

Putting up with the occasional rock song in the present film turns out to be no big deal, because Heath Ledger's character soon grows on me. We learn that William's father, a thatcher, got Sir Ector to take the boy on, in a bid to give him a better life. The boy was determined to "change my stars" and become a knight somehow. With Sir Ector's sudden death in between tournament rounds, Will gets his chance, even if he has to impersonate Ector to do it. After winning his first joust, he talks his friends into helping him train for other tournaments, under the assumed name Sir Ulrich von Lichtenstein of Gelderland. He soon gains two more people in his entourage: Geoffrey Chaucer, first encountered naked on the road due to gambling losses, and Kate the Farrier, who invents a stronger, lighter style of plate armor a couple centuries early. Geoff Chaucer forges genealogy patents for William and becomes his herald, introducing Sir Ulrich as one might introduce a professional wrestler, and publicly embellishing his employer's fictional exploits.

Of course William / Sir Ulrich starts winning his tournaments. Of course he falls in love with a spirited highborn lady who cares more for his poetical side than his skill with a lance. (They fall in love while dancing to David Bowie.) Of course he also picks up a rival, Count Adhemar of Anjou, a nasty fellow who likes wear black and humiliate his enemies. Think of a cross between Prince Humperdink and most of Basil Rathbone's villainous roles, and you've got the general idea. And he also gains a friend in high places, Edward, the Black Prince of Wales. The prince wants to joust in disguise, but only William is willing to oblige him. Of course it's a draw.

After winning plenty of tournaments in France, William and friends finally go home to England. For William, it's been over a decade since he was there. In the Cheapside district of London he tracks down his father, who is blind but still alive. The evil count learns William's secret, however, and William is arrested for impersonating nobility. I'm not going to give away the ending, but you can probably fill in the remaining blanks of this paint by number plot without too much trouble.

Despite the presence of the fictionalized future author of The Canterbury Tales, the story is not actually based on "The Knight's Tale," which is perhaps just as well. That would be too depressing. Aside from the odd music choices, this film is never going to win awards for originality, but it's fun and likable, well worth watching once, assuming you've nothing better to do. The late Heath Ledger, whom I'd never seen in anything, was cute and engaging, but I much preferred Paul Bettany as Geoff Chaucer. Overall, I give the film three broken lances out of five.

Your turn! Review some film that you don't watch all the time but don't actually hate. Write it up in your blog or journal, along with a link back here, and leave a link to your entry in the comments below. Our virtual film festival is a week from now, so don't put it off too long!

If you get the opportunity, you should see "10 Things I Hate About You". I think that is my favorite of all Heath's movies that I've seen.

I absolutely love A Knight's Tale. Own it on DVD. Watch it over and over again. One of my favourite all-time movies. Yeah, it's silly. Yeah, it's unoriginal. Never-the-less...

Looks like I am well prepared for this one. I direct you to the following blog post.

In which I review various sci-fi flicks. They're mostly old movies that I didn't get a chance to watch

I have to admit that this movie is one of my guilty little secrets. For some reason it is just one of those movies that I just love to watch. LOL!

I've been lax on the Weekend Assignments because there's been a lot of stuff to do....

But here it is. Enjoy, I hope!

OK, I'm actually turning in last weekend's overdue assignment with this post. But I plan to catch up to everyone else tomorrow.

Mine is up.I found I'm not a great reviewer, more of a recapper, commenter type.

All right, I'm all caught up on weekend assignments now. My review is up

I'm trying to make up for my Monday lapse. It's up!

After a whole bunch of exposition, I finally got around to reviewing Enlightenment Guaranteed.