Harry Potter and a Thousand Faces 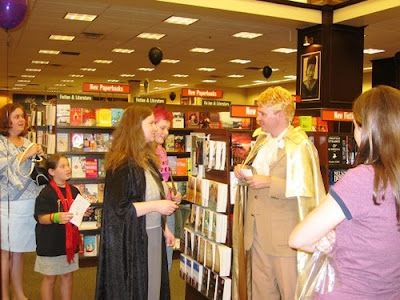 A Harry Potter book release party at Barnes & Noble
Sooner or later I really need to read The Hero With a Thousand Faces and other books by Joseph Campbell, which tell about recurring themes and characters traits that turn up over and over in myth and story. Actually reading up on this subject would make writing an entry like this much easier. As it is, I'll have to rely on what I learned in high school, what I've picked up since then from various writers online and off, and my own thoughts and common sense. What the heck; that should be good enough!

Based on my reading of an entry in Pat's blog, Here, There and Everywhere, there is a certain amount of backlash at the moment against J.K. Rowling, who has been in court recently trying to prevent someone from publishing an unauthorized concordance to the Harry Potter books. At issue is the question of whether the principle of fair use applies to such a project, or whether an alphabetical list of her characters and concepts, fleshed out with original descriptions based on her work, constitutes copyright violation. The legal dispute is not as easily resolved as you might think. Rulings in fair use cases vary quite a bit, based on four different considerations:
In this case, #1 certainly argues in Rowling's favor. As long as it was a nonprofit fan thing, it didn't bother her too much, but making money off her characters and situations is something else again. #2 is generally a pro-Rowling situation, because fiction is afforded a greater degree of copyright protection than non-fiction, because of the public's right to know the facts (e.g. news, government reports, etc.). However, the derivative work here would be non-fiction, and you can't copyright the facts themselves. Anyone can state that Rowling has written seven books about a young wizard named Harry who repeatedly battles the evil wizard Voldemort. The non-fiction work is transformative; that is, it is doing something else with the material, not just repeating the story, and that's a good thing from a legal standpoint. And you can't copyright names and titles, although you can trademark them. (I'm certain there are plenty of trademarks on elements of Rowling's work. Trademarks cease to be valid unless you defend them against infringement, but that's a completely separate legal area from copyright.)

On #3, things get a little tricky. How much of Rowling's work would be chopped up and rearranged in a concordance? Is it a substantial portion? Presumably it would include every character, every place name, every spell name. Is that too much for fair use? And how much of the plot would be in there? Plus there's the fact that there are only just so many ways to state a simple fact. If a decently-long entry about Ron Weasley describes him as having red hair, being the younger brother of Fred, George, et al., having an alleged rat named Scabbers, wanting to be prefect, etc., chances are excellent that the text will pick up phrases used by Rowling over the course of the series.

I'm not sure how #4 works here, because a concordance will not harm the sales of the Harry Potter series, and might even give them a tiny boost. On the other hand, Rowling wants to put out her own concordance. Since she hasn't written that yet, I'm not sure it can be protected by copyright in advance. This principle may have to rely on her rights with respect to the books already out. Still, the court may decide otherwise. I am, after all, not a lawyer.

So, anyway, that's the legal situation in a nutshell, to the best of my understanding. The cultural and public relations situation is something else again. Fans feel that as rich as she is, she should just let some fan take this project commercial, and not be greedy about it. That's not how it works, and that's probably not how it should work; but there's a certain amount of wiggle room. Many authors are highly tolerant of fan writing based on their work, as long as no money changes hands. That's the part here that is likely to be seen by Rowling as a violation of the author-fan relationship, and she feels obliged to push back. But it makes people angry, and so they look for evidence that Rowling is a hypocrite, that her books are a ripoff of someone else's work to begin with, so she has no right to complain if people rip her off in turn.

And this is where we get to the part I alluded to at the beginning of this essay/rant. I can't begin to take seriously the idea that Rowling started with The Worst Witch or some other story and then changed some details, and neither should you. The truth is, every piece of fiction ever written, and especially every piece of successful fiction, has elements in common with lots of other fiction.

Let's start with the name, in case someone found another Harry Potter somewhere. I expect that somewhere prior to 1990-something there was a character named Harry Potter in someone else's book, maybe even someone else's fantasy book. After all, "Harry" and "Potter" are both common English names. I myself worked for a family of Potters for twelve years in the real world (such as it is). However, you're not going to find another fictional Harry Potter who started attending a school of wizardry at age 11 after semi-accidentally surviving a magical attack in his infancy, whose best friends are a poor redheaded boy from a large family and a brainy daughter of dentists, etc., etc. Similarly, Rowling's lawyers have already successfully defended her in a lawsuit from some other author who previously coined the word muggle, but whose actual book had little in common with Rowling's books.

As for Harry's basic character traits, 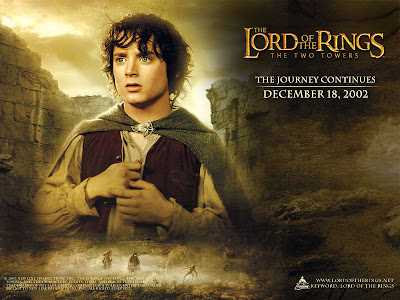 you are going to find lots of alienated, downtrodden characters who attend a magical school and ultimately save the day, because the outsider hero is an important trope in fiction generally, and the school of magic, while not quite a cliché, is fairly common. I had one in the Mâvarin books before the first HP book hit the shelves, but one book has nothing to do with the other. Harry Potter is as much Dr. Richard Kimble, Frodo Baggins, Menolly (or Jaxom), Oliver Twist, Rani Fost, Charles Wallace Murry, Buffy Summers, etc. as he is the girl in The Worst Witch - which is to say, they all arise from the same archetype(s), but are by no means copies of each other.

Take Frodo, for example. Like Harry he is an alienated, somewhat tortured character with a heavy burden to save the world from a an insanely powerful, inhuman evil magician, and must do so after his old, wise and mischievous wizard mentor is killed. Oh, and there's a ring involved. But Harry's journey is not Frodo's journey, his friends (mentors aside) are not Frodo's friends, and although there is sacrifice and triumph for each, they have different ultimate fates.

Harry's story is a very long, very detailed Bildungsroman - in other words, a coming of age story. Literature has zillions of those. Several of the Harry Potter novels involve mysteries or riddles to be solved, another common trope. Goblet of Fire is a series of labors or tests the hero must accomplish, something that can be traced back as far as Hercules at least, and is commonly found in fairy tales. The last book is largely concerned with the Hero's Journey, essentially a quest, and ends with perhaps the most mythic theme of all. All these are elements one finds in a substantial portion of literature, especially fantasy, which relies heavily on this sort of thing. Tapping into these familiar themes gives a story a resonance that it wouldn't have otherwise. But when you look deeper, you find that Rowling has used all that stuff to build something complex and detailed and original. Harry doesn't go down a road with an assortment of friends to find a magic ring. He does lots of different things, for fairly complex reasons, aided and impeded by a number of well-rounded characters.

Elements of the HP books that legitimately come from elsewhere include many of the mythical creatures (e.g. dragons and unicorns and centaurs) and some of the magic principles, but there's nothing wrong with that. Anyone can have a centaur, even a wise and learned centaur. But even there, Rowling has put her own stamp on things. A Piers Anthony centaur is not a J.K. Rowling centaur, and a Rowling unicorn bears little resemblance to a Peter S. Beagle one.

So go ahead and look for other stories about young wizards in training, about teenagers coming of age, about the tortured, much-despised outsider who must save the world from the unimaginably powerful villain. You'll find lots of them, and if they're decently written you will probably enjoy them. But do not imagine for a moment that Harry Potter is based on LeGuin's Sparrowhawk or Yolen's Henry of Wizard's Hall. He isn't.

And really, after all these years of massive fame and financial success, don't you think the author Rowling cribbed from would have brought a successful lawsuit by now, if such a person existed, and had a legitimate case?

I've heard some people complain about the Harry Dresden books because the main character is a wizard named Harry. ::Headdesk::

While I'm not a lawyer, I can speak on this subject from experience. The people putting the concordance together should get the blessing of the copyright holder, or have a darned good attorney available to defend their reasoning. A fan project is one thing, but once a profit stands to be made things change.

Besides, is there a large publisher who would touch that concordance without having their legal ducks in a row?

It all leaves me shaking my head.