There's a tradition in Tucson that on the first 100 degree day of the year, the ice breaks on the Santa Cruz River (some say the Rillito). I suppose that is a happy circumstance for the legendary sand trout that live in the mostly-dry riverbeds around here; but for those of us to live on land, it is more a matter of perverse pride. This is where we smile grimly, and resign ourselves to the long hot summer ahead. It's our penance for all the gloating we do in the winter, when our friends and relatives Back East are shoveling snow, and we may or may not need a sweater.

When John and I got to town in 1986, KVOA Channel 4 had an Ice Break Contest, presided over by legendary weatherman Michael Goodrich. Whoever guessed the date and time of the first official 100 degree reading would win a prize. (A trip out of Tucson would be an appropriate prize for the time of year, but I don't think they did that.) Nowadays the meteorologist over there is the almost equally legendary Jimmy Stewart - and before you ask, no, he doesn't live in Bedford Falls or have a pooka friend named Harvey. My Googling tonight doesn't lead me to believe the tv station has the contest anymore, but I could easily be wrong.

Anyway, way back in 1986 or 1987 I either entered the contest or considered doing so. The date I chose was May 19th, our wedding anniversary. Why not? It was an historically plausible date, a little early but not by all that much. According to the NWS Tucson site, the earliest 100 degree day since 1894 was April 19th, 1989, the latest first 100 degree day was June 22, 1905 (clearly before global warming took hold!), and the average date is May 26, a week from now. 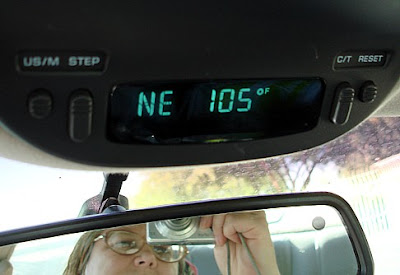 Well, this year, we don't have another week to wait. The ice break really did come on May 19th. It actually got up to 103 at the airport, 101 at Davis-Monthan, and 105 in my car, assuming you believe my car's digital thermometer. Ah! Here comes summer. Jimmy Stewart says that the fewest 100 degree days on record for Tucson was 21 in 1967. This year, at least one Tucson blogger is predicting 100 of them. I don't know what the recent statistics are on that, but it sounds plausible to me.

The house was...rather warm when I got home, and my laptop wasn't happy. In fact, it was claiming to be rather catastrophically unhappy: 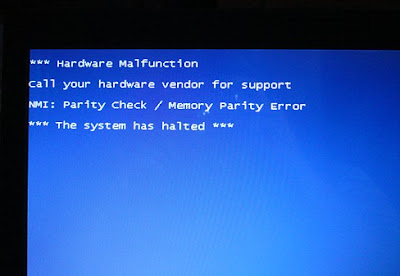 Oh, you hate to see that!
I turned it off and rebooted. It seems to be fine now, but I may have to start shutting down in the daytime.

It being our anniversary, we went out to dinner at Mama Louisa's, and had a fairly modest meal in keeping with my pending unemployment. To commemorate the occasion, I snuck a picture of a tiny portion of the mural that covers the restaurant's walls. John deemed that "pathetic," but it seemed the most interesting way to document a meal out with a man who doesn't want his picture posted in my blog. I'll save the mural shot for the MPS roundup next week.

It's 90 degrees Fahrenheit here in Singapore, it's almost all year round unless it rained!

It was 103 on Tuesday in LV. Today it's cold 78 degrees and 8mph winds that are bending the palm trees. I'm not going to the pool as planned -- those palm fronds are dropping.

BTW, if you have an older CPU check to make sure that the fans are working -- not only the "exhaust" fan but the motherboard fan. I had that happen to me last summer and fried my motherboard.