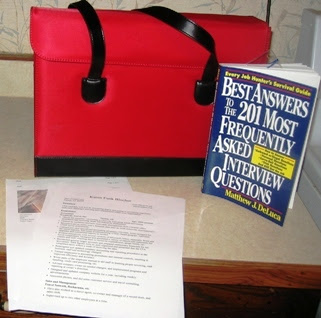 As you probably know by now, at 5 PM today I will join the ranks of the unemployed - briefly, I hope! So coming up with this week's Weekend Assignment topic was almost a no-brainer:

Weekend Assignment #217: What's the best piece of career advice you were ever given?

Extra Credit: What's the worst piece of career advice you were ever given?


In my case, what stands out as the worst piece of advice was also the best piece of advice. Sort of. I was riding in the car with my mom, fresh off the Bee Line, I think, headed for her home on Florida's Space Coast. It could have been any time between 1976 and 1986. In fact, she said it to me on several occasions during that period. When she first said it I was probably still in college, an English-and-film major whose disastrous last math course was back in high school, whose career plan was to write novels and screenplays behind the counter of her very own used bookstore. Picture naive, 20-year-old Karen, sitting in a rusty Chevy mommobile with her divorced psychologist mom who writes plays on the side. What words of wisdom does Ruth Anne have for her daughter?

"I think it would be fun to be a night auditor at a motel."

I wasn't sure what a night auditor was, but I was certain such a job could not possibly fit my personal definition of "fun." My mom went on to say something about double entry bookkeeping, and getting a charge out of getting the numbers to match up. Uh-huh. And you're saying this to your daughter, the aspiring writer who has never seen a ledger in her life, and for whom even intermediate algebra was a source of misery?

The weird thing is, she wasn't wrong on the basics, only the particulars. I never did go to work for a motel, or work the night shift; and I've never maintained a physical double entry ledger. But in 1991, the owners of Travel Tree/Travel Network decided that it might work out better if they converted a travel agent into a bookkeeper rather than teach a bookkeeper the travel industry. When my manager asked whether I'd be willing to learn bookkeeping, I thought of my mom's bizarre advice, and the fact that I was burned out on being a travel agent anyway. Then I said yes.

And whaddaya know - reconciling numbers did turn out to be fun, as long as it was on a computer; and there wasn't a sine or cosine in sight! Two years later, I was the bookkeeper/accountant/operations manager at Worldwide Travel, on my way to becoming the successful, unemployed accountant I will be later today.

How about you? Did you ever get a piece of astonishingly good or bad advice from a parent, teacher, guidance counselor, best friend, co-worker or mentor? If so, I'd love to read about it. Write it up in your journal or blog, along with a link back here, and then leave a link to your entry in the comments below. I'll do a roundup of everyone's entries a week from now. Have fun, and may all your advice be good!

Happy Belated Anniversary! And I hope you find something new, work wise, soon. I can't think of any work related advice, good or bad, at the moment. Maybe because it's now 7:15am and I've been up since 4am. That tends to turn my brain to mush.

Hey, I had the time to write something!

here's what I learned

Hmm, career advice, good or bad? Best advice: Choose a career that interests you, that provides security, and that has opportunities for promotion.

Worst advice: "pursue Women's Studies; avoid teaching because you will have to relocate to find a good paying job." Those were famous last words from a career advisor at a university where I had gone to find out about a teaching program for middle aged women with a previous degree. He was suggesting I not go into teaching? I couldn't believe my ears. The next day, I drove to another university, applied for their teaching program, got in right away, started the following Friday. Graduated two years later with a Master's Degree in Education. Nine years later, I am quite happy teaching, thank you! I recommend teaching to anyone who has already pursued a career. Hmmm, maybe this should be a journal entry! bea

I found this one pretty challenging, but I came up with *something*.

I'm not so great with advice, but here's what I've got.

I have 3 grown children, so you know I have advice, good & bad.
Kiva
The Eclectic Granny

I am not totally sure that this qualifies, mostly because the only career advice that seems to have worked out for me is "You'd be a good fill in the blank".