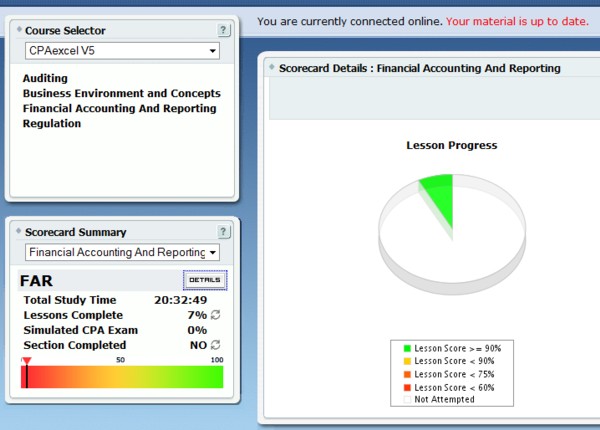 Aw, man, this CPA review lark is going to take it out of me, I can tell. My new 61-day seminar had the exact same first assignment as the 41-day one, and I got a late start on the four units I didn't do the first time around. I struggled to get back into the mindset of it, and studied Earnings Per Share 2 all over again, ending up with probably twice as much study time on it as the posted average. Statement of Cash Flows 1 and 2 proved to be easy, but Statement of Cash Flows 3 was a killer. I did a lot of floundering on some of the test questions before I finally finished it off and got to bed at 9:30 AM. It was a long night!

The grading turns out to be automated, as far as I can tell, from the most recent scores on each unit's two tests. Even after sleeping five hours (all the dogs and my brain allowed me) I was too tired to go back and redo each test for which I had settled for a score of 92 or 96 (although I did redo one or two). I therefore ended up with a grade of 99 on proficiency questions and 100 on the past exam questions.

At midnight Sunday morning the second assignment arrived in my email.. It doesn't look too bad - only 9 units compared to Assignment 1's 14 - but the time and brain cells required will depend on the complexity of each unit, how much calculation is involved and how many test questions there are.

Tonight's grading does confirm something I'd suspected but didn't count on. Each assignment is supposed to be 3 days, but it arrives at midnight and the due date and grading is said to be on the third day. If one takes this literally, it effectively means the student only has two days from the arrival of the email, which says to try to get it done "before the" third day. Hence my all-nighter, hoping that getting it done the morning of the third day would be close enough. But it looks like the actual grading takes place at the end of the third day, so I needn't kill myself over it next time. I hope!

Meanwhile, all afternoon and evening I've been too awake to take a nap, but too wasted to accomplish anything much. I looked over a few of the Assignment 1 units a bit more, and did the dog park thing (in much-needed new sneakers, thanks to John). I also did a lot of messing around online and started reading The Mislaid Magician. (Hi Pat!)

The one moderately productive activity I managed was to finish editing Heirs Chapter Four and update the word count for Chapters Three and Four, having done a major continuity fix for each. Remarkably, my many Chapter Three edits yielded an identical page count. That's all right; I was going for better, not shorter. I've got Chapter 5 open now, and I'm five pages into that. (Later: make that 13.)

Gee, I'm tired. No all-nighter tonight. After church tomorrow I'll need to start in on Ratio Analysis and Changing Prices and Financial Reporting, plus the more familiar territory of Cash and Bank Reconciliation. No wonder I had zombies on the brain last night. I was slowly turning into one. Not a Republican one, though, I'm happy to report.