First I heard the wind, and then the rain, and then the absence of rain. I suspected that the lack of rain on the roof might signal the arrival of the long-awaited Tucson snowfall, but I was distracted and did not run outside until well after the rain began again. By then, the primary evidence of its passage was on the roof and windshield and hood of my car:


It was after midnight, and no snow was evident in the front yard under the rainy night sky. I checked the back yard, and got a different answer: 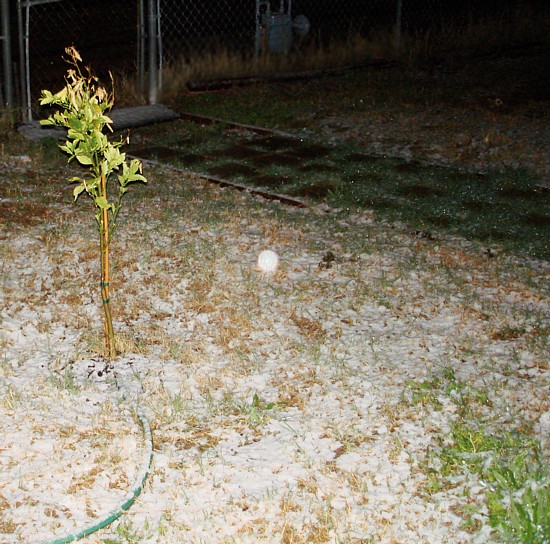 Tangerine tree, surrounded by snow.
Snow still partially covered the grass. Hooray! To my mind, snow in Tucson doesn't really count unless it "sticks," however briefly. I did check the poor tangerine sapling, which John took a chance and didn't cover last night. It didn't seem to be frozen, but it didn't seem very healthy, either. Poor little tree! 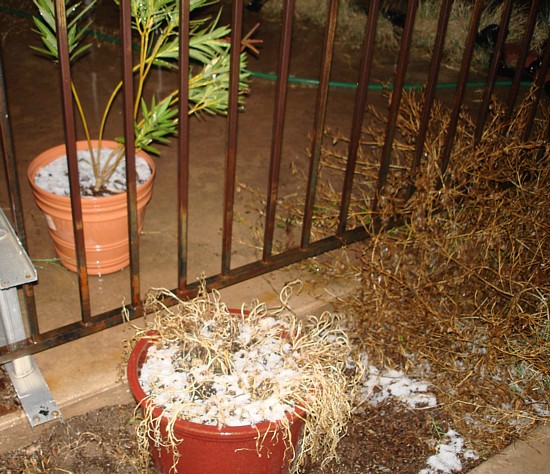 There was snow in the ruins of John's garden of annuals... 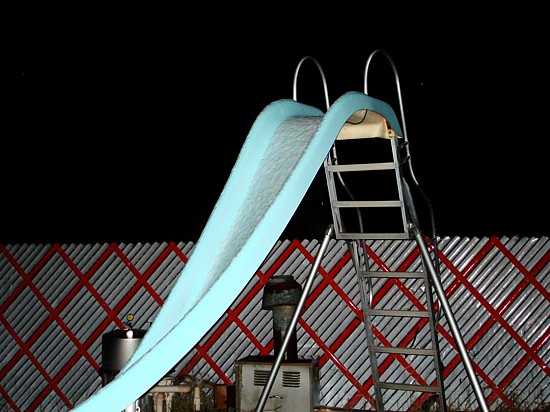 ...and snow on the disused pool slide. 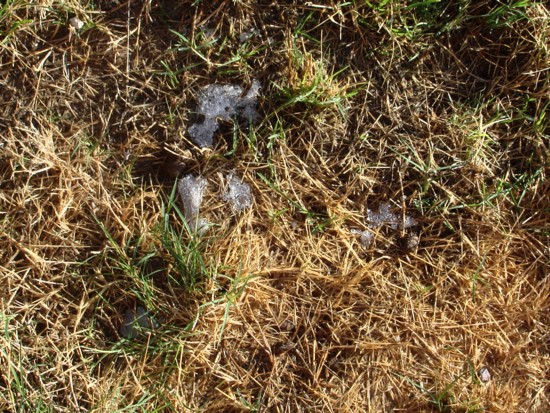 By morning, the snow was completely gone from the car and the planter and the slide. But I found a tiny patch of it still adorning the faded winter grass. 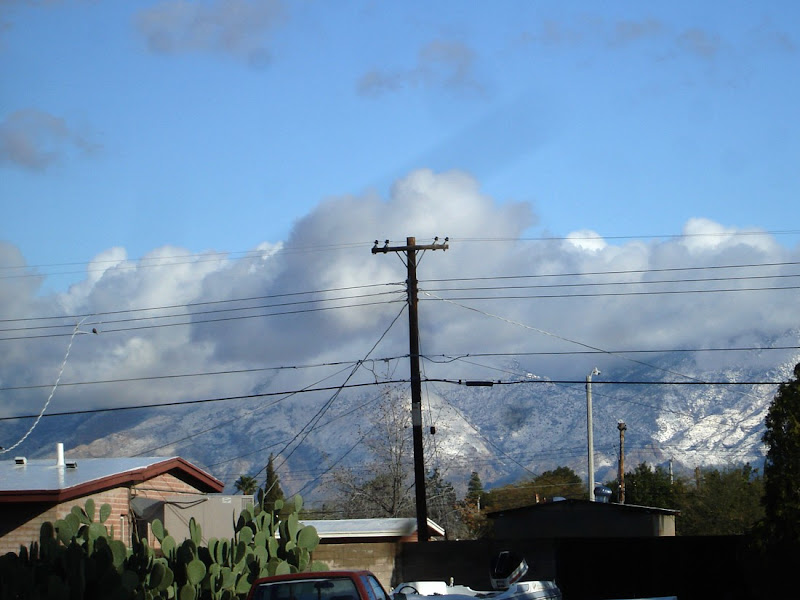 At 9 AM there was still quite a bit of snow on the mountains, much of which was gone by late afternoon.


Any snow was long gone from the dog park when we got there at 5 PM, but there was plenty of flooding. The water fountains weren't working, so Pepper and other dogs gravitated to the puddles instead. We (that is, other humans and I) figured that either the pipes froze or the Parks and Rec people had turned off the water in anticipation of same. 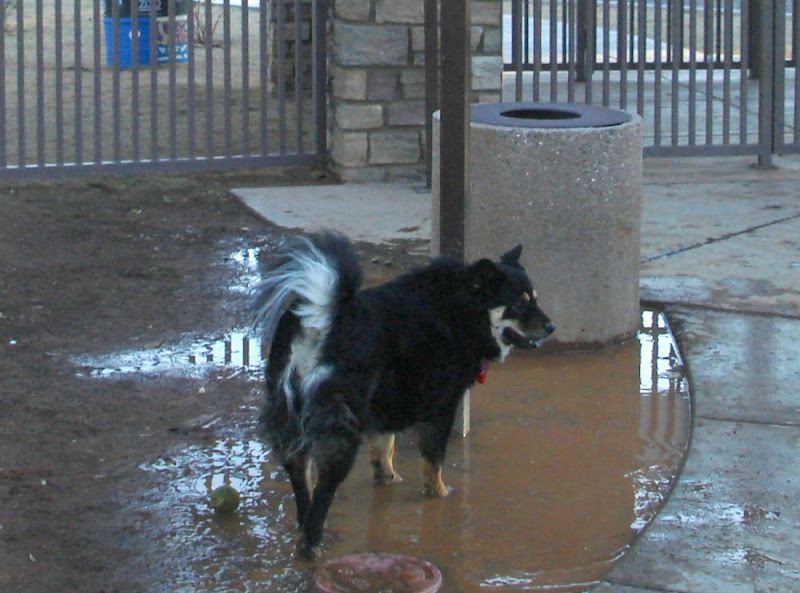 Given the lack of alternative water sources, I couldn't get too upset with Pepper for standing in puddles, something she tends to do at every opportunity. Fortunately, Cayenne hasn't the same inclination - much. 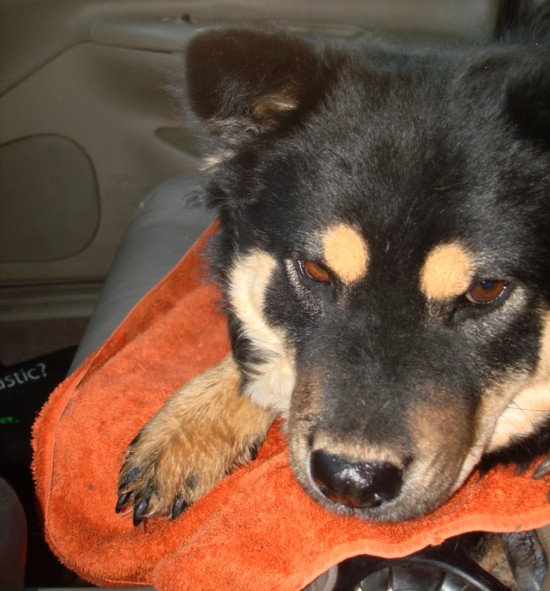 Check out the muddy paws! Good thing I have a towel in the car! 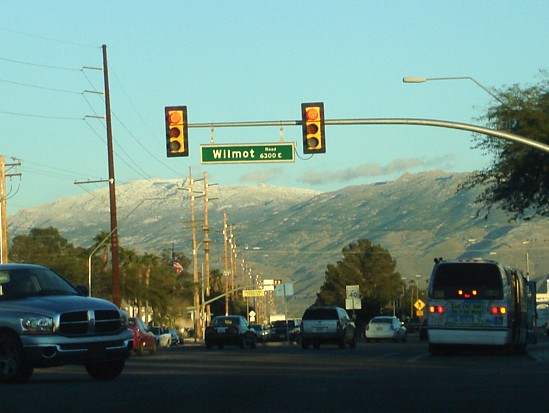 On the way back from the dog park, I saw more snow in evidence on the Rincon Mountains than on the Catalinas.

So it looks like our roughly biannual snow has been and gone, such as it was. The January 2007 snow was much more dramatic, a nice little nighttime snowfall on my side of town that lasted through the morning. Ah, well, it's not as if I want snow around all the time. I saw a lifetime's worth of the stuff in Syracuse and Columbus. Still, in a city where it's a true rarity, it's a lot more appealing than in a place where 109 inches had already fallen by mid-January, as I read Syracuse has had.

I love the turquois sky in the wilmot photo. It's lovely. Valerie

Love those mountains for a backdrop!
Hugs
TJ