I Went to the Animal Fair

The birds and the beasts were there! Not a baboon or an elephant, but horses, donkeys, llamas, ferrets, cats and dogs. Lots of dogs.


Okay, I should back up a sec and explain what I'm talking about. There was an Animal Fair at Reid Park today. I knew about it because I happened to see some rescued mares and a mule in adjacent corrals at Reid Park late yesterday afternoon. 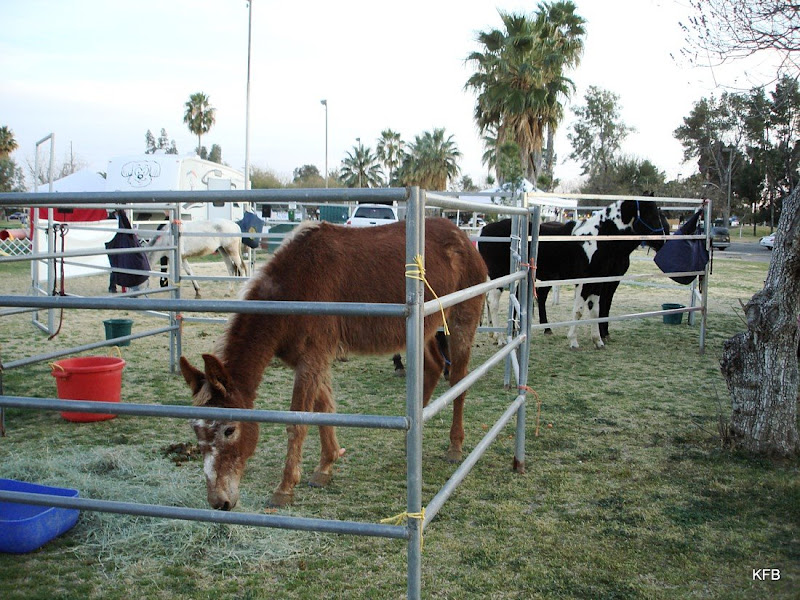 And oh, yeah. Cayenne met a bird named Petey, which was also the name of my brother's parakeet when I was about five years old. 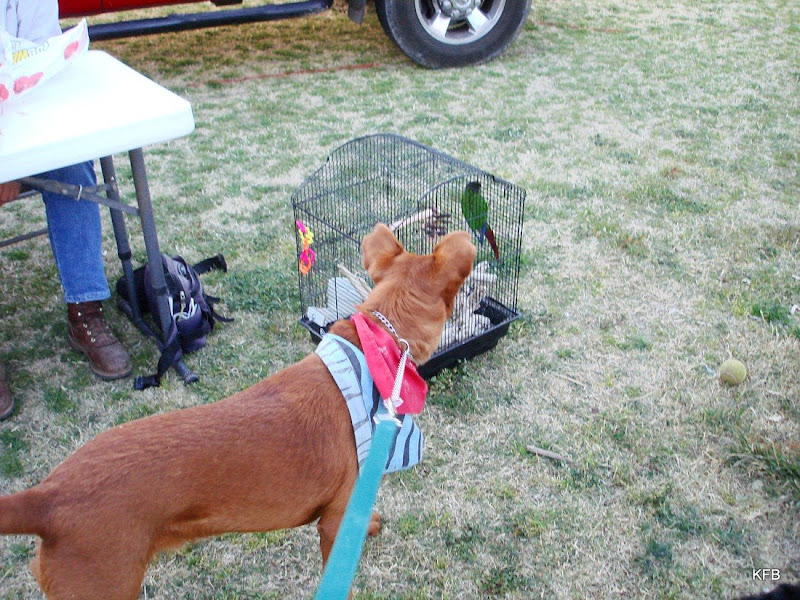 So this afternoon after I gave blood, I took the dogs to the park. The parking lot was completely full, so we ended up on the other side of Country Club Road a block away. Lots of people were coming and going from side streets and parking lots, many of them with leash in hand. 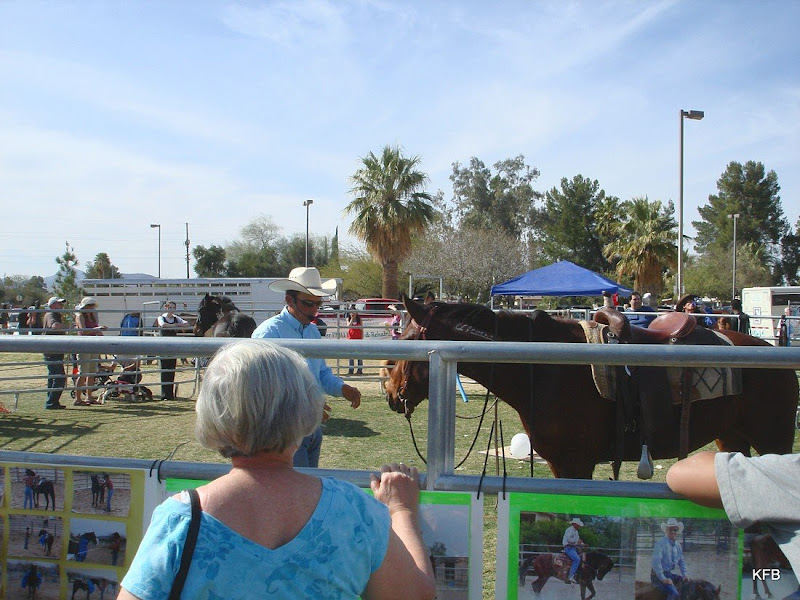 When we arrived, a man was doing a presentation about the rescued mares, and how to identify a particular brown horse from all the other brown horses in the world. 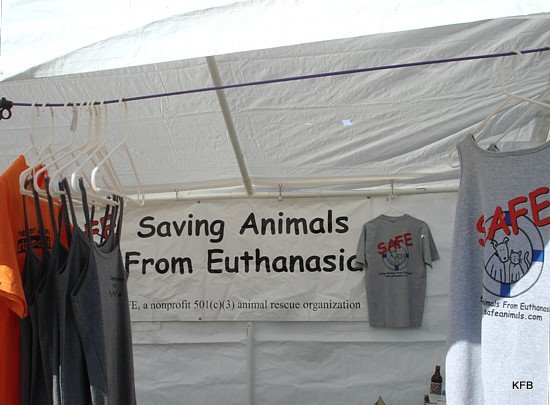 SAFE was there, the same group from whom we got Pepper 11 months ago. So was the Humane Society, and one of the volunteers there remembered Cayenne. I even got a chance to catch up a little bit with Karyn Garvin, the trainer who helped us with Tuffy when she was a puppy.

There were lots and lots of dogs about, either up for adoption or being led from booth to booth by their owners. But I wasn't kidding about the other species. There were burros, several kinds of horses...and even llamas! 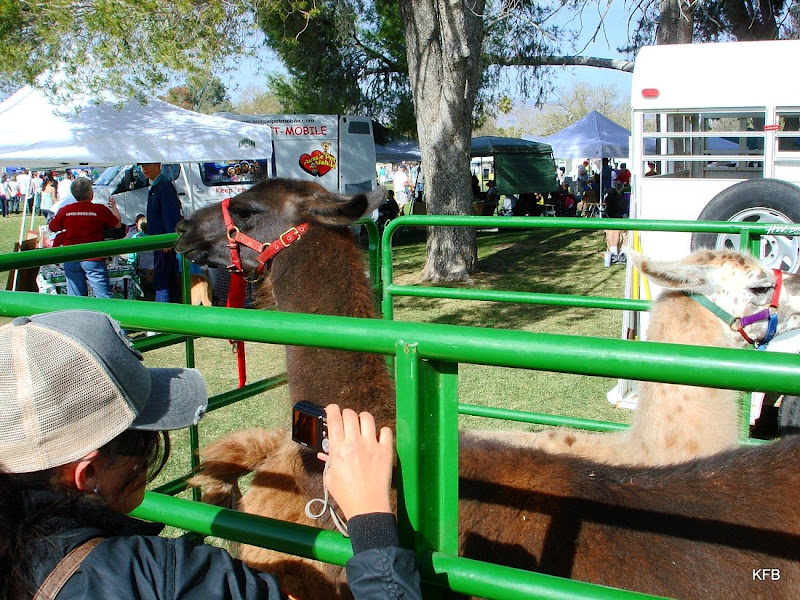 Yes, Arizona has a llama rescue group. If you have an abandoned pushmi-pullyu, I expect they'll rescue that, too. 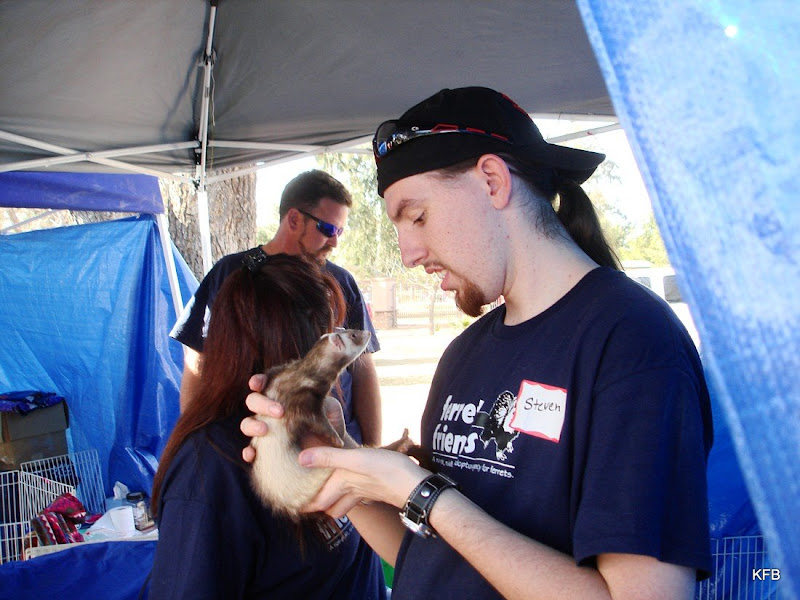 There was also a ferret rescue group.

No, the dogs aren't getting fresh with the blonde woman. They're just trying to get closer to the ferrets! I suppose wherever there is (or was) greyhound racing, there is a greyhound rescue group. But that's just the tip of the iceberg here. I saw rescue groups specifically for basset hounds, beagles, boxers... 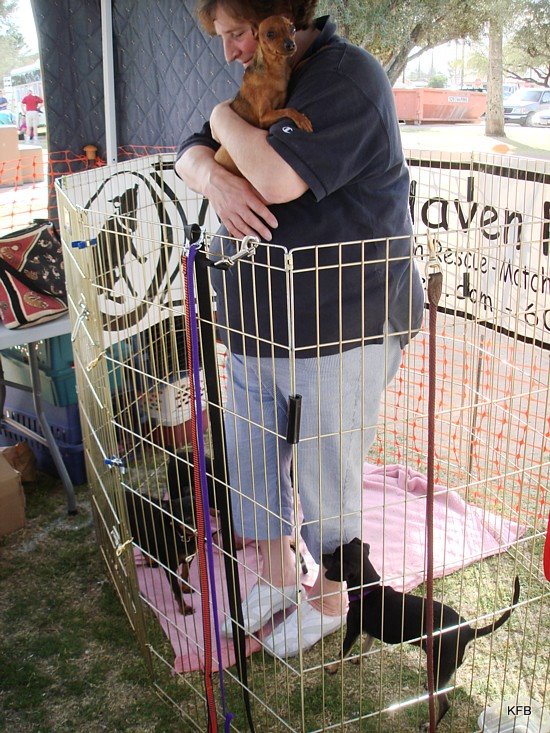 ...miniature pinschers (nicknamed "minipins," to my temporary bemusement), springer spaniels and I forget what else.

There were people hawking dog training, grooming, natural dog food, canine tooth cleaning at home, dog-themed beer, an alleged pet psychic, and the usual kettle corn, lemonade and other standard fair food. The sun was beating down, the temperature was well into the 80s, and lines were long for anything to eat or drink. I didn't try for any refreshments, because of the lines and because I had an illicit can of diet orange soda in my purse. 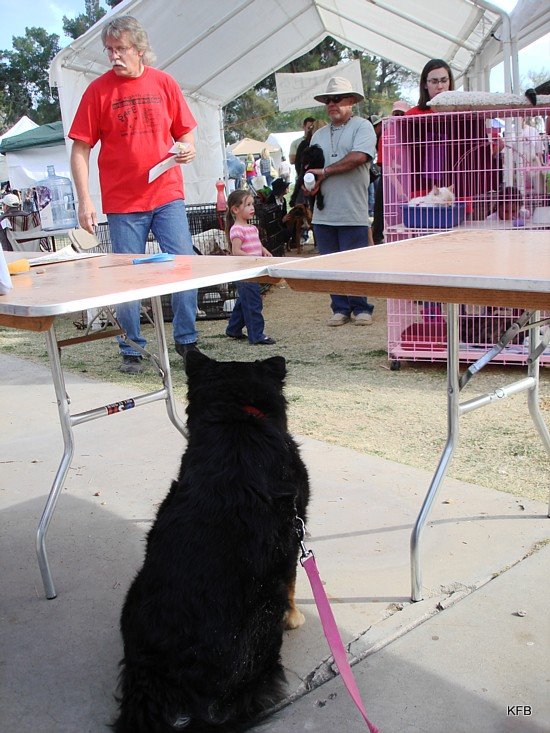 By the time I got to the basset rescue group, the heat, dehydration and exertion of walking around and untangling the dogs' leashes about once a minute were getting to me. The Red Cross isn't kidding about exercise on the day you give blood. I was only walking around and thought it would be all right, but an hour in the sun without food or drink was too much. The basset folks let me borrow a chair and sit in the shade for a few minutes, and after that I sat at a picnic table behind the SAFE adoptions tent and drank my soda, while Pepper strained to get closer to the cats up for adoption. At one point Pepper and Cayenne both walked into one of SAFE's dog pens, just to get closer to a cat! It may well have been a pen Pepper rode in on trips to PetSmart adoptathons before we got her.

From there we went to the dog park a few hundred feet away. I sat in the shade, and even the dogs weren't keen to do much running around by then. Soon we made the trek back to the car. Once we were home, the dogs both stretched out on the floor of the den for a good rest.

I love events like this. I used to work with a Rottweiler Rescue group and we had a setup at one such fair. Not anything on this scale though! Great stuff!

This so cool. Thanks for posting this!

Hello, I was browsing the internet and I stumbled upon this picture here. The one with the blonde and the dogs, well that is me right there. My names destiny. I would really appreciate if you could take that down. Privacy thing. Thank you!

Okay, Destiny, I removed the photo from my blog and the Picasa web album where it was stored. I hope it didn't bother you too much! I figured that since the photo didn't show your face, privacy wouldn't be an issue, but I'm happy to cooperate. Have a great (rainy) weekend!

Thank you so much! It is just the whole google thing that is the issue, it show up on google. I was looking for a picture and up pops me LOL but thank you very much!