After three weeks of guest professors, it's probably about time for me to post another Weekend Assignment of my own. This one is inspired by a very minor holiday we just had. Here we go:

Weekend Assignment #254: In the movie Groundhog Day (1993), Phil Connors is forced to repeat a particular day over and over until he gets it right. Is there a particular day you'd like to repeat, either to fix something that went wrong or just to enjoy a great day all over again?

When do you expect winter to be over where you live?

As for myself, I'm not really big on regrets. There are things I said when I was six years old that I still wish I hadn't said, but they're not worth a whole day of "If I knew then...." I don't really regret not finishing my BA in English and Film in 1979. I don't regret that terrible day when my mom died and I still had to go to class that night and help present a Powerpoint assignment with my learning team.

But yeah, there is one day I'd like to do over.

It could have been almost any day between October 9 and October 27, 1971. That was my window of lost opportunity. But I remember a specific day, a specific decision not to scrape together the money to take the bus downtown and walk into the local art museum. I probably would have needed the admission price, too. I doubt that part even occurred to me at the time.

I kind of think it was a Thursday.

On that particular Thursday, and on the days around it, about three weeks' worth of particular days, something amazing was going on at the Everson Museum in downtown Syracuse. Yoko Ono was having an exhibit there, with "guest artist" John Lennon. The avant garde installation began on John's 30th birthday, but the Lennons arrived a few days before that, I think, on the 6th. Ringo Starr was among the guests at John's birthday party. The event was called 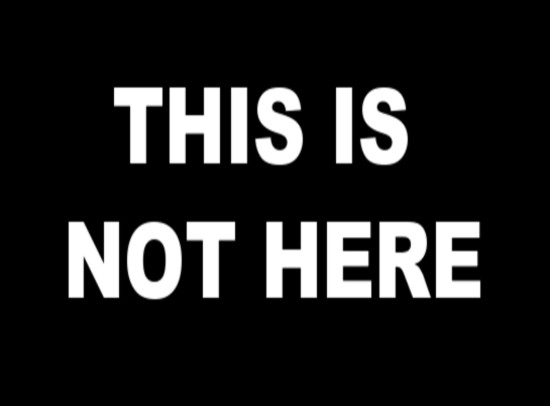 A vague approximation of the T-shirt design for Yoko Ono's
This Is Not Here art exhibit, Everson Museum, Syracuse, October 1971.
Now understand, I was only 14 years old, just old enough to go downtown on my own. I think I had done it about once at that point. I had been a Beatles fan since 1964, when I was six years old. The band never played in Syracuse, and I probably would not have been allowed to go see them if they had, because of my age and the cost of tickets. October 1971 was the only time in my entire life that I could have been in the same building with John Lennon.

But I figured that the ex-Beatle would not be interacting with the general public (probably true), and I didn't know much about avant garde art and probably wouldn't appreciate Yoko's work. And $1.20 in bus fare was a lot of money to me back then. So I let the opportunity go by. I didn't try to get the money, or ask my parents to take me, or anything. I'm sure we discussed the exhibit over dinner, because it was big news locally; but I never even tried to go witness the cultural history that was taking place approximately 8.9 miles from my house.

Idiot. I want a do-over. Give me the bus money, or let me get my big brother to take me, or Mom or Dad. Even if I don't see Lennon for so much as a split second, or Yoko, or any of the famous people who descended on the Everson that month, I still want to see the art. I still want to take a chance that something interesting might happen. (Not as interesting as this, however. I was only 14!) If I ever get that time machine I've been whining about wanting, this will be one of my first stops.

Oh, and on the winter thing? I think the few nights we broke below the 32 degree mark in January were about it for winter weather in Tucson this year. But I could be wrong!

How about you? Is there some missed opportunity you'd like a shot at? Words to be said or unsaid? A bus not taken? Tell us about it in your blog, with a link back to this entry, and leave a link to your entry in the comments below. I'll be back in a week to post the results. Meanwhile...

For Weekend Assignment #253: Roughing It, guest professor, Florinda asked how we'd cope with two days of no electricity, phone or car. Here are excerpts from our responses:

Tackle the "to be read" pile. I'll read by candlelight.

I hate power failures at night. In one respect, they aren't so bad in the summer when daylight lasts longer, but the tradeoff is that without air conditioning or even fans running, it can get too hot to sleep. In cold weather you can get under the covers, but there's more darkness. There's not much to do except sit and talk with your family for awhile, really, and that's not a bad way to spend your time...unless you're by yourself and don't even have that option.

First, I'm going to assume this doesn't happen in the dead of winter. That happened to me once and the house got down to the 40's before the power was restored. It wasn't pretty. I did read by the fireplace, though. I felt a little bit like Abraham Lincoln. (He was kind of a big deal to us Illinoisans).

That's it for now. Don't leave us in the dark this week: please participate in this Weekend Assignment! And yes, I'm still in desperate need of your suggestions for future Weekend Assignment topics. Email me your ideas at mavarin@aol.com anytime. If I use your topic you'll get full credit and my undying thanks. And thanks to Florinda and Laura for their Assignments!

I can understand why you might want to re-do that day, Karen :-). As for me, I picked the "great day you'd like to experience again" option: here it is.

What a wonderful topic! (And a very interesting story you have there, Karen.)

Not only do I fully embrace your Groundhog Day theme, but I am proud to admit that my hubby and I have personally attending Groundhog Day in Punxsatawney, PA because we love Groundhog Day the movie so much (read: nerds) and wanted to experience it in person. Every year on Feb. 2, hubby calls me in the morning. Twice.

Just wanted to let you know I'm still mulling this one over, Karen. So many? How do I narrow it down?